It’s Made Of Food [A Soylent Review]

Years ago, before my friends knew any better, I was invited to a dinner party. It was an eclectic mix of people that I considered chums, acquaintances, sworn enemies and “Steve, Or Some Name That Sounds Like It”. We all sat at a long table that seemed to be much more suitable for planning world domination or building a Lego model of Kansas City. One that we have to shout to get our voices heard on the other end of. I felt as ravenous as plates of Chicken Parmesan were placed in front of us. It looked glorious. The cheese to chicken ratio was like nothing I had seen up to that point in my life. I was ready to induce a mozzarella coma but as soon as I picked up a fork, the fear started to settle in. People stared on as I froze stiff, a multitude of thoughts swirling through my head:

“Do I hold the knife with my left hand or right? If I hold with my left, then I’d have to switch hands to put the fork to my mouth.”

“Of course you can use a fork with your left. What are you? Some kind of baby? Babies don’t belong at dinner parties.”

“They’re all staring at you. Say something funny. Feign a stomach ache. Jump through the window.”

“Well, babies CAN come to dinner parties, but they’re sequestered to a different table and they get less food because they can handle normal adult shit. Like you. Baby.”

“What if I don’t chew right? What if I overestimate mouthfuls and some breading or sauce dribbles out?”

I ended up not eating at all. Everyone else has long since forgotten about this night, but it still lingers with me every time I have a public meal. Since then, I have had a fascination with the idea of meal replacement. Eating is not a preferred activity for me and I vie for a world in which doing it is unnecessary. I would much rather get my nutrients from a pill or a tasty bev. Over the years, I’ve experimented with different kinds of protein/meal-replacement bevs, but none of them actually satisfied me. I would still require food on top of that and I’d feel much worse off. 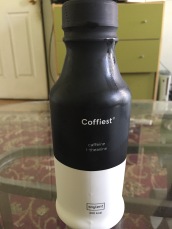 In an effort to further my research on meal bevs, I figured that I should probably give Soylent a chance. I blindly bought a 12 pack of their Coffiest product, which is their soy-protein formula mixed in with “strong” coffee. It’s meant to replace breakfast and if I could be entirely frank, I’d be fine with never having to eat breakfast again. Most mornings, I’m not even in the mood to eat. I just do it to avoid feeling like crap later. If I can eliminate my daily egg and cheese sandwich, I’d consider myself a winner.

But first, I actually have to…umm…try the damn thing.

Off the bat, I have to say that the packaging is sexy as hell. The smooth, matte labeling is concise and to the point. There’s just something about that typeface placed on an expansive, simple color that just makes me want to BUY BUY BUY. That probably makes me a hipster. Wait. I’m about to drink Soylent. And blog about it. In Brooklyn. I am a hipster. Damnit.

Upon opening, it looks like, well, coffee. There’s nothing about the visual appearance that seems unappealing. It seems to have a normal viscosity and there’s no white chunks of residual chemicals. I took a big whiff of it, and it smells exactly how it looks. Lots of notes of coffee with a hunt of mochaness. This doesn’t seem to be entirely as disgusting as I thought it would be. Considering the contents, I was expecting much worse. I was expecting a slurry. A slop. I was expecting it to be like the concoction of chocolate milk and mashed potatoes that the handicapped kid in my school would make every day, while he laughed manically. I guess I might as well…umm…try it…

Initially, it tastes like any run-of-the-mill iced coffee. I was about to type the words “It’s not bad at all”, when the aftertaste kicked in. What the holy hell? If I didn’t know any better, I’d think I was being poisoned. Instead, I’m fully aware of the chemicals that I’m pumping into my system. I can’t pronounce most of the things in the ingredients and the aftertaste is a stern reminder of this. Maybe I’ll get used to it?

The second gulp didn’t make it any better. The aftertaste is much akin to the taste of a diet Rockstar Energy Drink with all of the citrus notes stripped away. On third gulp, it starts to taste like nothing at all. Nothing is much more manageable. Nothing is just cold bev going down the gullet. Nothing is going to save my soul. Nothing is…nope, still chemically.

9:50 AM – Halfway through the bottle. I’m thinking about the pizza in my fridge, which is not a safe idea. Nothing about that pizza was safe. Dominos is offering up a large pie with unlimited toppings for 10 bucks. UNLIMITED TOPPINGS?!?!? And here I am, drinking Ovaltine tonic like a chump.

9:53 AM – It’s really not THAT bad. I’ve always been a wuss when it came to aftertaste. For example, I am the only person I know that can point out a Pillsbury product. They all have the same, faint chemicalness. I once went to a Red Lobster and tasted it on the cheddar biscuits. I asked the waitress if they changed the recipe to Pillsbury and she gave me a sad nod.

10:00 AM – I’m definitely starting to feel a buzz from the coffee. Coming from a chronic caffeine addict, that’s a huge complement. It’s that weird, “brain-expanding-in-the-back-of-your-head” feeling that I cherish so dearly. My fingers feel light as they tap on the keys and I friggin love it.

10:02 AM – My throat is now coated, which makes the aftertaste dissipate. Now, I’m just tasting the coffee again. Kind of like drinking whiskey [or any liquor, I guess]. The first sips burn like hell, but then you start tasting the actual flavor.

10:05 AM – I’m watching WCW Superbrawl ’94. They plugged an ad for their 1-900 hotline service. 99 cents a minute so you can vote for who you think will win the main event. But they warn the kids to ask for their parents permission before calling. Sorry, but did they also warn the kids to ask for permission when they ordered the $40 PPV event? I think if the parents are cool enough with that, they’d be fine with their kids chatting it up with a pre-recorded Bobby Heenan.

10:10 AM – I was definitely hungry when I opened the bottle. I’m no longer plighted with this. Not exactly full, but the prospect of eating doesn’t sound appealing. Not exactly satisfaction, not exactly nausea. Probably a mix of the two? Not going to lie, I kind of like it.

10:12 AM – Seriously, though. Unlimited toppings shouldn’t be legal. I can hear the pizza laughing at me from inside the fridge. Joke’s on him. He gets to live another day. Or another 3 days. Shit. I’m going to be gone for 3 days. That pizza is screwed.

Time will tell how long it will take before I have to eat again. I will say that it metabolizes differently from other meal-replacers I’ve had, but I’m not sure how long that’ll last. All in all, I can see myself doing this daily. Not because of it’s taste or because it’s some sort of miracle cure. I can see myself doing this because I’m that firmly opposed to eating breakfast. And because I still have 11 bottles left. Whoops.

Soylent: It’s Food Or Something Probably I’m Not Sure Whatever But You Won’t Look Stupid Drinking It Because Nobody Ever Looks Stupid With Bevs