Good Moleman. We have nothing in common. Look at these records: Jim Nabors, Glen Campbell, The Doodletown Pipers. Now look at her records: Starland Vocal Band? They suck! It’s Friday, August 21, Twenty Two Zero. The weather in Brooklyn is 81° & Pantone 11-4800 and somewhere, somebody left their bowl of cereal sitting too long. The situation always escalates quickly. One moment, it’s a fresh bounty of crispness. And then it’s a blob of grainy goo the next. “How did it happen so quickly?”, the person wonders. “How could such a pleasant bowl of vitamins turn into a slimy slurry of sugar?” Resigned, the person gets up to grab a knife and fork. It’s the only proper way to eat this newfound breakfast loaf. And me? I pour the milk when I’m ready. That’s called being an adult. And if you’ll excuse me, I need to go change my shirt, as milk dribbled all over it. When I get back, I’ll have some things on my mind.

– I got back from my sudden wardrobe change to find that my seat had been stolen. From right under my thumb, some shitkicker invaded my home and put his feet up on the couch. He had already used his wits to charm my wife and subsequently stole her heart. This is no longer my home. But I am a man after all and it is in my capacity to win it back. I looked that sonofabitch in the eye and prepared to fight him. To my horror, he already had his dukes up. 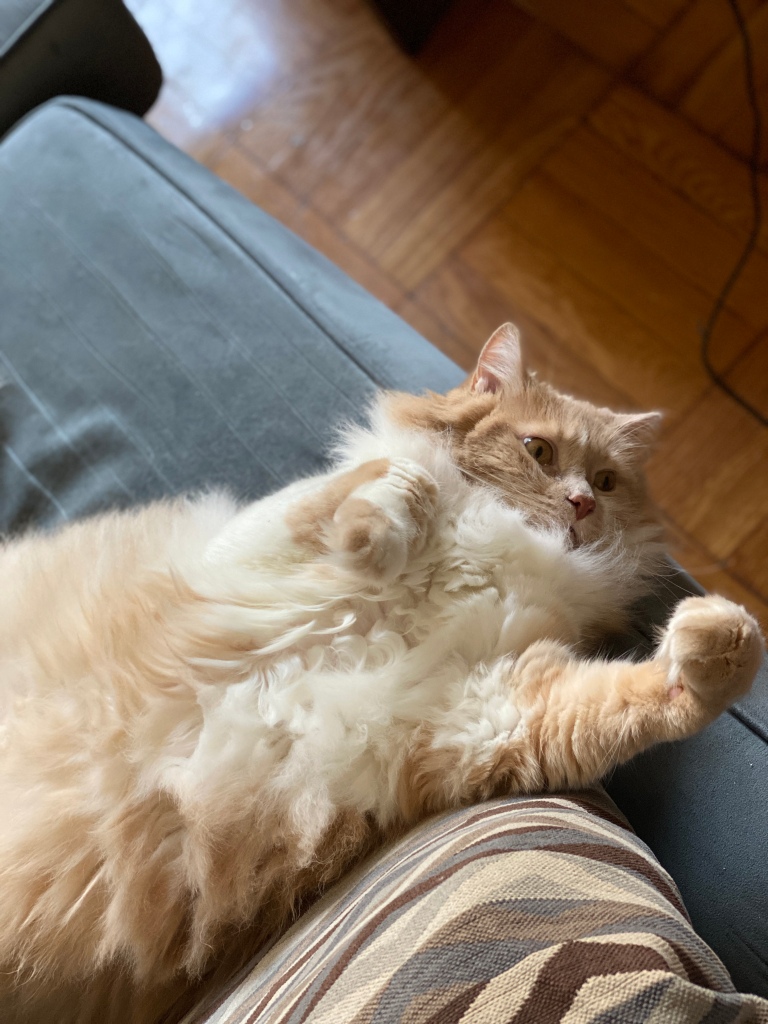 I quickly got my bearings straight and proceeded to do my signature move. I poured another bowl of cereal and ate it awkwardly at the edge of the couch. To the untrained eye, you might think that this brute had won. But that was just the beginning of my move. You see, I wanted him to think that he had won and that my wife and couch were his to keep. Eventually, he relaxed and unclenched his fists. Showtime. Slowly and deliberately, I started to lower my cereal bowl. His eyes widened in horror as the bowl hovered closer and closer to his back. And the second that the cold plastic touched the tips of his hairs, he retreated. The couch was mine once again! Nothing left to do but flex my muscles, kiss my wife on the cheek, finish my cereal and start writing. Just gotta grab my handy, dandy— 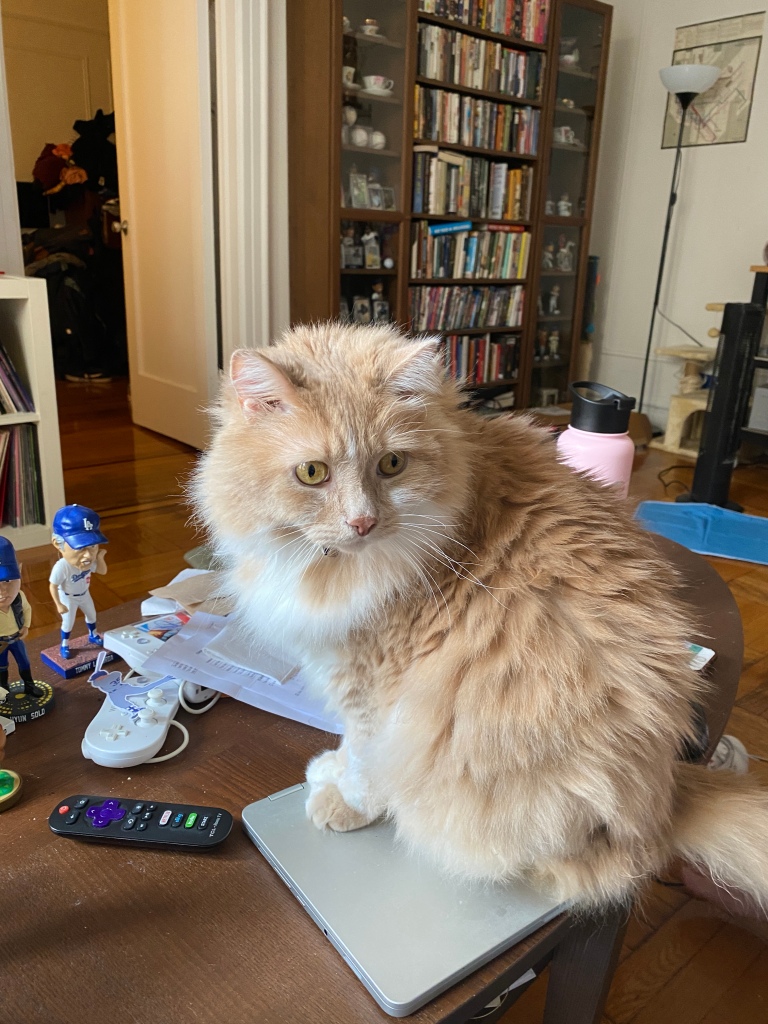 – Growing up, my parents taught me a lot about commitment. I think I’m ready to pass that knowledge on. You see, when the time is right and you know you’re ready, you go looking for that special one. And there’s gonna be a lot of duds along the way and you might lose hope altogether. But then one day you’ll see her, sitting lonely and unnoticed at an Art Van Showroom. She’s the one. You wheel, deal, schmooze and eventually, you can take her home. And after living together for a trial period, a warranty if you will, she can be yours forever. And that means something. Life isn’t a game. You can’t just ditch her after a few years and look for a new one. You can’t even try to find a side piece, because trust me, she will not be happy. It might sound easy, but the new piece would be out of place and generally unwelcome. You can’t do it. You have to be a man and stick with her, for better or worse. It’ll be a wonderful existence. Your friends will be so happy that you found her, because she makes everybody feel welcome and comfortable. And if you’re that kind of a couple, your friends could even sleep with her and you wouldn’t bat an eye. Because you know that when you wake up in the morning, she’ll be right there waiting for you. She is loyal to you and you only and that’s the kind of love that you can’t replace. And the years will go by and she just won’t look like she used to. Her frame might be warped, she might not be as warm or cozy as she used to be and years of stress might change her general appearance. But when you need her most, after the day has kicked your ass and you seemingly don’t have a friend in the world, she’ll be waiting at home to welcome you. And you’ll be so glad that you found her. Because there’s nobody else like her and she loves you unconditionally. That’s commitment.

But what my parents didn’t warn me about is that sometimes you might think you found The One, but she ends up being a dud. You’re excited about her at first and you want to be with her all the time. But then the problems will start to seep in. Her personality might be warm, but it could also be too warm. Like overbearingly warm. She might be really relaxed and comfortable but she might also have no backbone, which is something that you wouldn’t think is necessary, but trust me, you need a little bit of resistance. Your friends might even complain that she’s not a good lay. And then after two years, you realized that you made a huge mistake. I had learned that firsthand. A couple of years ago, I made a commitment that I thought would last a lifetime. Instead, what I got in exchange was a deflated, lumpy, uneven, no good rotten couch that is covered in lint, cat puke and sweat stains. One of the seats is basically sunk in and if you sit in it for too long, you’ll be covered in sweat, as the suede generates an intolerable amount of heat. My parents have always kept their couches for 10+ years, but after two, Rachel and I have already retreated to Bob’s to find a replacement. It’s sleek, faux-leather, reclining, cup holder-having and electric as fuck. We even bought a new coffee table to go with it, because my wife is rich. This time, I’m sure, I’m totally confident, yup, this is the one. It has to be. Right?

– Top 5 Songs That A Depressed Furniture Salesman In 1995 Would Listen To:

Full disclosure: these are actually songs that I’ve been listening to on my drive home from work on Saturdays. For some reason, I’ve been recently fascinated with the idea of being a depressed furniture salesman in 1995. Like that’s such a specific life and it’s nothing like one you could have today. So I’ve been trying to get into that mindset, driving to my empty home that’s decked out in Arizona Accents and leather furniture. I would pour a Fresca in a glass, put All 4 One on the CD Player and just…cry a little, for no reason. Also, I’m bald. Not really a life for me, but a dude can dream.

– The Youtube consumption in my household has become slightly ridiculous. Soon, we’re going to have two seperate subscriptions to YouTube Premium. That’s how bad it is. This is despite the fact that not enough time has passed to fully feel the effects of the virus shutting down the entertainment industry. I’m sure it’ll be much worse a year from now when there is literally no new episodes of anything and we’ll really be hurting. I guess we’re just priming ourselves for the inevitable. Aside from news and sports, this is the only form of media that can flourish in a pandemic. People are just making their own entertainment and we’re eating it up, because it beats the pants off of reruns of The Office. Really, we could be using our time more productively by watching the millions of movies that have been put on the back burner, but we don’t have time for that. Movies are like 2 hours long! We just can’t ever find the time to commit. What we DO have time for is watching some stranger hunt for villagers on Animal Crossing for 3 hours. Or some dude opening cases upon cases of baseball cards. Or 6 hour broadcasts of random VHS tapes [on Twitch, not Youtube, but whatever, you get the idea]. We have very busy lives! Who has time for movies?

Try this trick over the weekend: Broadcast yourself eating cereal on the couch. Then, watch the hits and money flow in!

Have a streamy weekend, everyone!

← Make it so, number one (Star Trek TNG)
I’d Rather Drive A Blazer For 30 Seconds [Friday Thoughts W/ TeeCoZee] →