Good Moleman. You don’t make friends with salad. It’s Friday, August 30th, Two Thousand and Nineteen. The weather in Brooklyn is 91° & Pantone 0821 and somewhere, somebody is wondering what a trade war actually means. They’ve played Normal War before, but trading cards in the middle of a game seems unfair. Maybe that’s the consequence of losing a war? Does the game stop momentarily to become Go Fish? Does the government actually assuming that the Chinese are bad at cards? Will somebody please answer the phone? Are aces high or low? The rules of war are nondescript. I guess that’s the nature of the beast. And me? I’m more partial to Poker War. Best 5 Card Stud hand wins. It goes a lot quicker that way. I also have some things on my mind…

– I’ve been driving way too much lately. I know this because I think my right shin has permanent damage and my left arm is way tanner than the right. It’s not a life that I’m used to and haven’t been for a good decade. But here we are. Fumbling with my phone keyboard while waiting to get my oil changed. This is my life now. Instead of spending my Friday mornings getting stoned and watching Friday, I’m watching the local news in a Firestone lobby. Instead of making weekend plans with friends, I’m hitting them up on oil change tips. Instead of enjoying the last week of summer, I’m ordering synthetic oil. Instead of writing about funny things of substance, I keep talking about oil changes. Not a fan of oil changes? Well, I guess this is no longer the blog for you. Because this is now an oil change blog. Get used to it, Bub.

– I’ve probably mentioned it before, but I’m overly fascinated with how driving has changed since I took my hiatus. With the power of Spotify, I’ll never again be at the mercy of radio DJs and scratched CDs that I pry from between the seats. With the power of oil changes, I can pay 60 bucks to sit in a lobby for 3 hours at the mercy of some guy I never met nor ever will. And with the power of navigation apps, I’ll never be at the mercy of my failing memory. This convenience also presents a huge disconnect between me and the world I’m driving through. Driving is now an activity devoid of wonder and sentiment. I drove through Pennsylvania 4 times in the last month and I can barely remember a second of it. I used to look around and laugh at the names of towns like Buttzville. But now, I just drive a straight line, knowing that I’m going to go in that line for the next 500 miles. It has turned me into a machine with a direct purpose.

I took the time to drive around my old stomping grounds from high school. Things just didn’t seem the same. I went by the spot that I saw a tire pop off a Cadillac, bounce onto the roof of a Party Store, clear a cemetery fence and collide into a gravestone. But my phone didn’t register it, nor did it care to. All it wanted was for me to continue on M-13 for 3 miles. I came across the small bridge where I serendipitously found a friend’s cellphone that had been left on the roof of the car. But my map didn’t even think the bridge existed. I took a sharp turn down Beuche Rd, where I once ran over a twig and popped my tire. My navigation pronounced it “Beach Rd”.

The whole drive was a sobering sign of the times. Our lives have become so convenient that we forget to cherish memories. It’s incredibly easy to get from point A to point B, but it’s harder to remember what the space means to us. Pictures mean much less now, because they will forever be in the cloud with millions of other similar pictures. Everything we see or say or write are just as easily forgotten as they are accessed all over again. I want to believe that everything in life still matters, but what’s the point of them mattering if we can just relearn it all over again? Does that even make any sense? Will it make more sense years from now? Is this really the fastest route to get home? Will I ever come up with a proper punchline?

– I was driving down I-75 last week because I don’t know, I just ended up there a lot. A shit-kickin pickup truck came up behind me fast. I was already going 85, this dude wanted to go faster. Way faster. Like 87 or some crap. I then noticed that he had a Superman emblem on the hood. I immediately changed lanes and let the good man pass. After all, he’s Superman. He clearly has some important shit to do. But therein came the plot twist. His vanity plate read, “BIZARO”. My universe got flipped upside down. That wasn’t Superman at all. It was Bizarro Superman! It all suddenly made sense. The emblem on front appeared to be regular to me, but I was looking at it through a mirror. Regular Superman wouldn’t drive a Dodge, he’d drive a Chevy! The guy totally tricked me. I guess that’s what Bizarro Superman would do. Touché.

– I was leaving a rest stop in Ohio because I drank too many Mountain Dew Amps. Getting back on the highway, there’s always one of these signs: 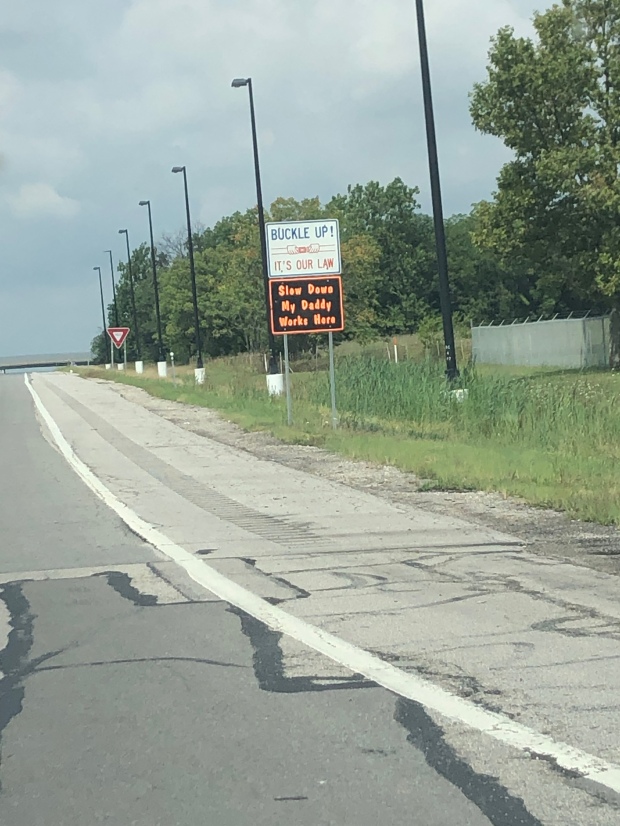 No, not the buckle up sign. I’m a firm believer in seat belts, God and taxes. I have a lot of problems with this sign below it. For starters, holy hell is it hideous. At first I thought I was being led to a Halloween USA. That faded orange color on the faux-Comic Sans just screams “overpriced rubber masks”. But the wording is just as horrible.

Slow Down My Daddy Works Here

I have so many questions. Did a kid actually make this sign? If so, good job, I guess. You’re missing a comma, but it’s kinda presentable. But where exactly does your daddy work? At the rest stop? On the roadside picking up trash? Does your daddy put up signs for a living? If so, I guess you’re already in the family business. Good for you. Or maybe it’s more obtuse than that. Maybe it’s the sign itself talking and his daddy is the seat belt sign. Maybe Ohio has a huge epidemic of seat belt haters that loathe them so much, they like to run over signs that tell them to wear them. Either way, this kid needs to read the room. This sign is placed at the exit to a rest stop. Shortly after this sign, the speed limit changes from 25 MPH to 70+. It is ridiculously irresponsible to tell people to slow down! They need to speed up in order to avoid accidents! Of all the places they could have put this sign, this is the absolute worst! Get bent, little kid. I need to speed up and your daddy needs to understand that.

– Since a Friday can’t go by without me talking about bevs, this is the part where I talk about bevs. Holy hell do I drink a lot of bevs while driving. I drank more bevs than my poor little bladder could handle. There’s something about the open road that makes me wanna guzzle an Organic Rockstar. If you were to look at the backseat at the end of a road trip, you would assume my name was Kyle. Because that shit is just littered with energy drink cans. Lately, I couldn’t drink half of a Monster without feeling so uncomfortably energetic that I’d send myself into a panic attack. As soon as I hit the turnpike, my tolerance goes through the roof. And being in Michigan, my cheap energy bev selection multiplied. I feasted on the likes of Rip It, Venom and Aftershock. I was totally willing to drink any energy bev under the sun. But then, a billboard changed my mind. It was an ad for Biggby Coffee [formerly Beaners Coffee, changed for obvious reasons]. They were advertising a new Red Bull Freeze, which, yes please, I would mainline that. But it wasn’t just that. They added cream. That’s right. A Red Bull Cream Freeze. What kind of psychopath would enjoy that?!? That’s like adding chocolate syrup to Mountain Dew or putting a lemon in your root beer. The combination just sounds volatile. I thought I was invincible. I thought I had no limits. But I was wrong. I am no longer willing to try anything and the good people at Biggby can go straight to hell.

– This is a van that exists: 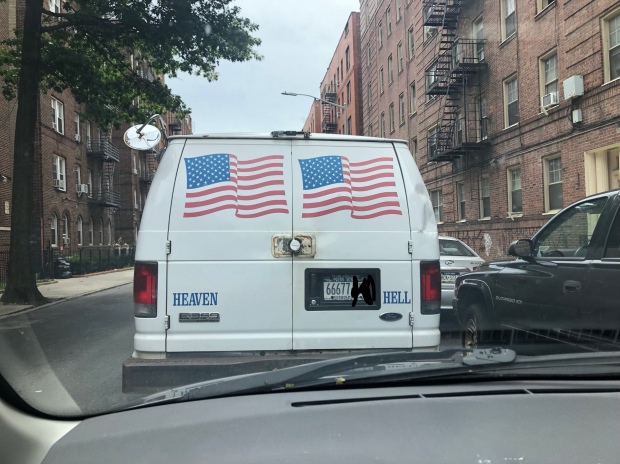 There’s way too much to unpack here. So much, I’m probably missing some things. This van represents both heaven and hell. And between heaven and hell is how you open it’s door. It seems very poetic that the American flags on the heaven door and hell door are exactly the same. Like this may be heaven or hell, but it’s all America to me. But you would think the placement would be switched based on the license plate. If the plate is 66677, then it should be hell on the left, heaven on the right. Or maybe it’s representing the ongoing war between heaven and hell. Whatever it means, this van is deep, and no, there are definitely no dead bodies in there, stop asking.

– Try this trick over the weekend: Get an oil change. Your car deserves it.

Have a parts and labor weekend, everybody!