Good Moleman. If only the sugar were as sweet as you. It’s Friday, February 8th, Two Thousand and Nineteen. The weather in Brooklyn is 49˚ & Pantone 14-4230 and somewhere, somebody is looking through a Pantone catalog. He’s looking up his area code [kinda purple], 69 [doesn’t exist, but 690 kind of looks sexy] and of course, 420. To his dismay, Pantone 420 is not the color of kind buds, but rather a darkish gray. The concept of his clothing line has now gone up in smoke. All of those Pantone 420 shirts, lighters and stocking caps that he put a down payment on are now pointless. He knows he should’ve looked it up first and not take Douggie’s word for it. That rat bastard has always wanted to see him fail. And me? I know that Pantone 420 is actually the color of weed smoke, not the weed itself. I think Douggie is a goddamned genius! I also have some things on my mind…

– I feel like my weekly “at-the-moment” weather reports are more accurate and less misleading than Apple Weather. I don’t understand why people use and rely on it daily. Instead of going through the minimum effort of providing an abbreviated 5 day forecast [temperature, wind speed, chance/amount of precipitation, heat index/wind chill, golf forecast, horoscope] it gives its users a temperature and a graphic. That’s it. So when people were looking at today’s forecast yesterday, they were seeing a scary rain cloud and probably cancelled their plans. What Apple failed to tell them was that the rain is going to end before noon and they could enjoy what would presumably be a beautiful day. In the next 5 days, it’s going to snow for 3 of them. Looks like we’re finally getting the winter we deserve! But no, Apple fails to tell us that it’s just 3 flurries with no substantial accumulation. But the snowflake means snow! Why would they deceive us like this? I think the answer is very clear. After decades of baking in the California sun, the people at Apple have become desensitized to “weather” and view it as some inconsequential black and white concept that can be simplified to the lowest denominator. Like, sure, it’s raining in Pittsburgh, but it’s still sunny here, know what I mean? We do, Apple. We do.

– Last night, I drank a half gallon of Sunny Delight and watched half of Shrek. Does that make me a full meme?

– Back when I was a less careful man, I found myself in a befuddling situation. I was carelessly placing bricks of Sharp Cheddar cheese into a cart because that’s the career that a college education landed me. By some dumb act of The Food Gods, a piece of cheese sliced my finger. It wasn’t a bad cut at all, but I spent a long time computing what actually happened. Could it really be that the brick of cheese was cut with such a razor edge that it broke my skin? Was the cheddar…too sharp? It’s no coincidence that around this time, I discovered that I’m probably lactose intolerant.

Fast forward to a couple of weeks ago. I was trying to peel a blood orange with my fingers because I don’t trust myself with a knife I am a man and do not need utensils to consume my citrus. The next thing I know, I’m in searing pain as my thumb nail bent backwards with the peel. But I persevered because I was too stoned react otherwise. As my nail filled with blood and the citric acid seeped into the wound, I remembered the sharp cheddar. Once again, The Food Gods have made me suffer to their puns. I am now officially cursed and need to be weary of what foods I encounter. T-Bone steak? Not if I’m driving. Death By Chocolate? You’re not fooling me this time. Lamb Shanks? Fuck outta here. I’m on a diet. A “not get hurt by my food” diet.

I was explaining this new diet to Rachel this afternoon over lunch. After a night of chugging Sunny D, soup was the only thing I could digest. And every spoonful of bisque wound up in my beard. Rachel shook her head and said, “Maybe you should just get better at eating?”

– This week’s Letter To Coze comes from Luiz Khumalo: 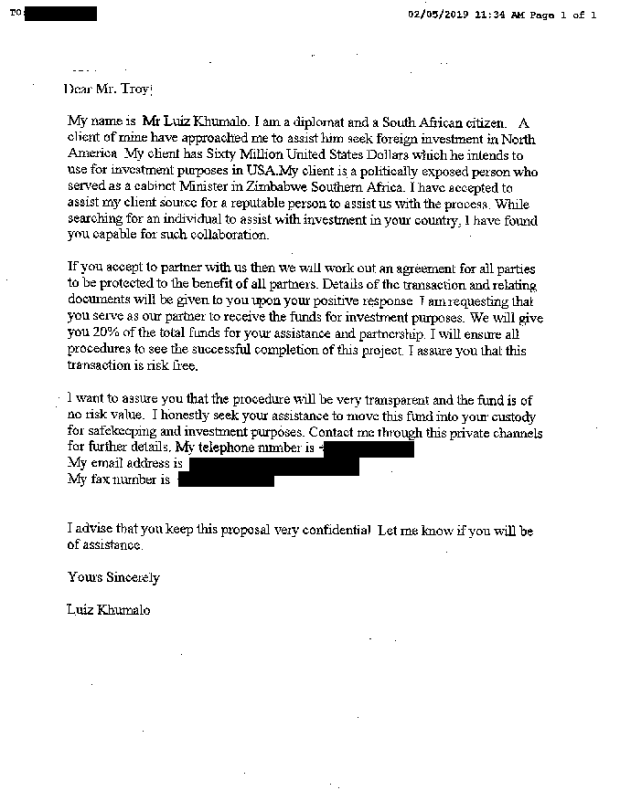 I am very interested in your offer, but you’re throwing some sloppy shade and I’m a little confused. Are you a citizen of South Africa The Country or Zimbabwe, The Country In Southern Africa? There is a huge difference, bro. For example, Zimbabwe’s cheef export is tobacco, which is dope but kills people. Meanwhile, South Africa’s cheef export is gems and precious metals, which is tite, but also kills people. I need to know whether or not the millions of dollars that I’m about to inherit is coming from blood money.  That is, unless your client is involved in something sick like Kickflips or Lemon Lime Beverages. Also, I’m a little unclear about what “politically exposed” means. Like, did he show his junk or reveal that he listens to Dave Matthews? Is he a narc or something? I don’t do biz with narcs, especially ones that listen to Dave Matthews. Wait, Dave Matthews is South African. Is your client Dave Matthews?!? Fuckin sweet! I hate Dave Matthews, no dice. But seriously, bro, what’s Dave Matthews like? Does he shave his own back hairs or does he make you do it for him? Does he actually hunt and forage all of the food he eats? Also, what do you mean by “work out an agreement for all parties to be protected to the benefit of all partners”? Does that mean Dave is into group sex, but only when there’s condoms in play? I can get behind that. My boy Douggie told me that “Crash Into Me” was a huge awakening in his sex life. But you already know that, you’re his manager after all. You know what? Screw it. Dave Matthews seems like a trustworthy dude, I’ll take his money any day. No problemo. If you want, you can hit me with the deets. My email is Sk8nblaze@hotmail.com. Just stop faxing my work place. You’re going to blow my cover.

P.S. I’m sorry that I didn’t keep this information confidential. But trust me, this puppy is only going to get like 8 hits. That’s not a weed joke, but it could be.

Try this trick over the weekend: Convince Peter Frampton that you’re associated with a Ghanan Prince and he would be willing to pay top dollar for an autograph.

Have a Frampton weekend, everyone!