Good Moleman. You’re reading the wine list, sir. Very good. It’s Friday, January 6, Two Thousand Seventeen. The weather in Brooklyn is 35˚ & Pantone 292U and somewhere, somebody is trying to remember what they were about to do. The person paces around the apartment, retracing every step, mimicking every motion, even attempting to defecate once more in hopes of figuring it out. After a good ten minutes or so, the person will stop. Some days, you only need a brief memory jog to get your noodle warmed up. But not me. I would never refer to my skull lump as a noodle. I also have some things on my mind.

– You would all be so proud of me. I woke up at the buttcrack of dawn to write this for you. The sun was barely up and even the guy that works on a table saw in his backyard all day hadn’t even started making noise. I went to the fridge, grabbed myself a Soylent™, sat down, cracked my knuckles, flexed my neck and oh crap, ow ow ow, I messed up my neck, ow ow ow gah! Why does this always happen when I’m about to write? Philistines are unaware, but there are plenty of potential injuries in the writing world. Some that I’ve been ailed with include:

And now I’ve got a bad case of Blogger’s Neck. So keep in mind the torture and agony that I went through to bring these words to you. Ignore the fact that they’re not any good, as who can be able to write well with a neck so stiff? I’m basically a national treasure for doing this. A hero for the masses. You’re welcome.

– A new year means a new Coze. Does that mean that I’m going to stop heckling people in traffic? Hell no. They deserve it. I have every right to mock them and their misery. I’m only talking minor upgrades, here. For instance, I’m going to stop farting in people’s faces on the train. It’s not like I did it to everybody, just the ones that deserved it. Namely, the dudes that spread their legs out. Screw those dudes. You get two of them on a bench and 6 seats turn into 4. It’s garbage. If he’s gonna pay the world a discourtesy, well, I’ll do the same to him. As a matter of fact, no, I think I’m going to keep doing that. It seems like a decent civil service.

One other thing that I’m doing to improve myself is that I’m revising my tie rules. No longer will I wear a tie every day, despite the occasion. From now on, one day a week, I will wear a T-Shirt.

Let that sink in.

I’m going to wear a T-Shirt.

I thought you said it was sunk.

But of course, they’re not going to be just any T-Shirts. I have to hand-select the perfect stupid tees to justify breaking my 10 year habit. And I’m going to have to name them TeeCozeTees. I just purchased what will be my debut TeeCozeTees: 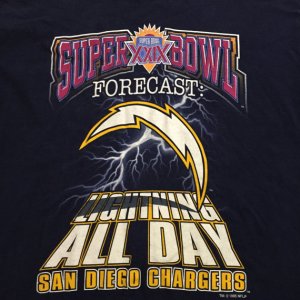 For the last 20 years, I have been looking for a Chargers Championship shirt. Because you know that in the heyday of QVC, many of those shirts were printed just in case the Chargers actually did win the Super Bowl. After all these years, I still have found nothing, but this comes real close. Just look at it, in all its glory. It’s so confident. Lightning all day, baby! Steve Young doesn’t know what’s coming to him. Unless he sees this shirt! Zap! Lightning baby! Feel the volts! Ohhhh yeah! And despite all of this, I’m sure they would still lose by a landslide. Probably worse than it actually was, considering that they would be doing nothing but shooting sparks instead of playing football. Whatever. My purchase is justified!

– I understand that gentrification is running rampant all across the city. This fact can’t be ignored. However, in my part of the neighborhood, it seems that the Oz in charge of the gentrifying is glitching out. Like there’s a number missing in the algorithm and everything is going haywire. Businesses are opening up that don’t really make sense. For example, there was a hardware store a block away from me. Not a big hardware store, it was kind of narrow, but it was a hardware store. Nice. Useful. That hardware store closed down and became a bakery. Not just a regular bakery, but one of those storefront ones that you can’t go inside of. It’s just a friggin booth. These businesses are prominent and successful in Manhattan and on bustling avenues, but this block is neither of those. Nobody is just strolling by and deciding that they want a cupcake. I never see anybody buy anything from there and yet, they’re still in business after almost a year. The building right next to it used to be a nail salon, but has been vacant for a while. So who opened up shop? Another bakery, this one called Cake Boi. First off, what the holy hell is a Cake Boi? Secondly, why would you open a bakery next to a failing bakery? Like right next to it? Your bakery is also going to fail! It’s not hard to figure this out. Next, they’re going to open up a gym that’s right across the street from a supermarket. Wait, THEY’RE ALREADY DOING THAT! Go home, Bed Stuy. You’re drunk.

This week’s edition of Ad Nauseous is brought to you by Charter Spectrum: We ate Time Warner and Time Warner tastes good.

Oh, goodie. Time Warner Cable is now called Spectrum. This does not affect anyone at all. Did they think that announcing this was going to convince people to get cable? Nobody is looking at that and thinking “Time Warner is such a terrible name. It makes me not want to watch TV. It’s cold and heartless and I hate it. Now, Spectrum? That’s something I can get behind! You know what, maybe I will fork over $100/month to watch the same mediocre television, now that their name is different! It’s a new day!”. Seriously, how is it a New Day? Because an evil company was taken over by another evil company? Is Spectrum the lesser of the evils? Was Time Warner funneling money to ISIS? Did they block the sun? Did Time Warner create a device to block the sun and made people unable to cross the street? Did Time Warner actually prevent us from crossing the street? You remember that? When you couldn’t cross the street? Well, now we can! Let us all walk in unison and cross that motherfucking street because the sun is back, the Cubs won the World Series and the brief and terrifying reign of Time Warner Cable is over! Spectrum is our new master! All hail Spectrum! We vow to do anything that Lord and Master Spectrum tells us to do and in return, we can cross the street under a warming sun! Spectrum knows all and is all! It’s a new day. Won’t you join us?

– In honor of another Drynuary, I have officially been sober for 5 days. I have also been extremely sick for 5 days. Today was the first day of not being sick, but now I have Blogger Neck, so there’s that. After a year of not smoking, I have deduced that it takes a huge toll on your immune system. You keep alcohol out of the mix? Catastrophic damage. I’m of the opinion that it’s vice that keeps my body healthy. Maybe if I gamble more often, I’ll lose weight.

– In speaking of that, my New Years resolution is to not lose weight, per se. I’d rather lose neck mass. Most of my old shirts don’t fit properly anymore because the top button has started choking me. If anybody knows any good neck exercises, send them my way. I could stand to lose a couple of centimeters. After the injury, of course. Ow.

-Try this trick over the weekend: Write while suffering from Blogger’s Neck. I dare you.

Have a necky weekend, everyone!