Good Moleman. Didn’t that movie used to have a war in it? It’s Wednesday, December 21, Two Thousand and Sixteen. The weather in Brooklyn is 39˚ & Pantone 584 and somewhere, somebody is buying a Christmas gift at the gas station. To be fair, he’s not happy about it either. He was hoping to get Christina in the office Secret Santa pool, but drew Bill instead. Does Bill crew tobacco? Maybe he should start. Yeah. A can of Copenhagen will be all he needs to cope with this holiday season. What a perfect Secret Santa gift! Little does he know that Bill doesn’t even need Grizzly to get through The Yule. He has Christina. And me, I was always more of a Kodiak guy. I also have some things on my mind.

– Did anyone else notice that Black Friday lasted extremely long this year? For some stores, it went on for 72 hours. That’s a really long day! I saw a few businesses that made it last for an entire month. How that’s even possible, I have no idea. The concept of making days infinite has been out of style since Friday’s dropped the TGI. Yet people are still trying it, wasting their time to convince all of the customers that it’s not Wednesday, it is indeed Friday and this Friday will last until they’re done with the SAVINGS SAVINGS SAVINGS. What they don’t realize is that calendar-altering is not necessary. They could use any of these buzztitles to get their sheeple into the store:

That way your Black Friday sale could also be on a Monday, Tuesday or White Friday. And I could stop getting mad at advertisements.

I’m never going to stop getting mad at advertisements.

This edition of Ad Nauseous is brought to you by M&M’s:

This ad has been on the air for about 20 years. Never in the history of TV has this been a thing. Every year, the Mars corporation gets together to come up with a new Christmas M&M commercial. Every year, Ted brings the Peppermint Schnapps and they forget to write a new ad. Even now that Ted’s gone, someone still brings Peppermint Schnapps to the board meeting, because tradition is tradition. One of the most successful candy companies in the world can’t come up with anything better than this. And what the hell is this, anyway?

Let’s break it down.

Two walking and talking pieces of candy are offering the bodies of their own kind as a sacrificial offering to a God-like figure that may or may not exist. And that’s just the setup. The yellow one is concerned as to whether or not “Santa” would like red and green M&Ms, despite the fact that Santa’s official colors are red and white. Let it also be known that half of the candies must be the kin of our other main character, the Red M&M. This is a plot point that’s totally skipped over and ignored because Peppermint Schnapps. Instead, the red one is annoyed that the yellow one would ask such a dumb question. Because of course, he never met the guy. BUT, he acknowledges that Santa is a real person, so why is he surprised when he actually exists? And for that matter, why is Santa surprised that talking M&Ms exist? Was he told before that they are a thing but didn’t believe it? Is it part of North Arctic Folklore? Will this cause Santa to reevaluate his life, swearing off M&Ms and other talking candy altogether? No. He’s going to faint, wake up, and murder the talking candies with his sugar-starved teeth. Because Santa cannot be stopped, not even by a Skittle flood.

– Random Christmas Memory #8762: I took a bite of ham. I chewed the ham and swallowed. I took a gulp of Mountain Dew and then proceeded to take another bite of ham.

– 7 years ago, I wrote an article suggesting that “Baby It’s Cold Outside” is total rape-bait. Finally, a hipster couple in Minnesota had the common sense to make the lyrics more PC. That said, I hope that in 7 years time, they fix “Santa Baby”. It was written back in 1951 by the niece of Jacob Javits [the guy with The Center] and it shows its age with reverse-feminist overtones. The song always irked me, mainly because it defined everything that ruins the spirit of Christmas. But then a certain cover version has got me thinking otherwise.

I’ve waited allll year for you
Is that my present?
I want the big guy
And the big ring
Who said good things come in small packages?
Sssssssanta
Hurry down my chimney tonight

Just typing those words makes me feel dirty. The seductiveness of her voice is rivaled by none. It almost sounds like she’s touching herself. This chick has some serious Santa issues and every time it plays in my store, the customers give me uncomfortable glares. But I have no control over it, the Muzak Box has a mind of its own. My only saving grace is to have a really loud conversation so people won’t notice. I’ve actually devised a relevant rant to go on every time Sheila gets wet. It goes like this:

I have a huge problem with this song. How in the hell can you tell someone to “hurry down the chimney”?!? First off, chimneys are very dangerous. They’re filthy and tall and narrow. If I was to direct someone to go down a chimney, I would want that person to be careful. Secondly, Santa has very little control of how fast he can go down a chimney. He basically falls down the thing, it’s not like he can fall faster. That is, unless he gained more weight, then his velocity would be affected. But in that case, he would also be at risk of getting stuck in the chimney. So maybe put weights in his shoes? Is that a thing? I mean, the dude has to go to every house in one night, I think he’s hurrying as fast as he can. Who is she to make him go faster? Is she more important than all of us that Santa just HAS TO go faster DOWN A CHIMNEY so she could get her platinum mine in a timely manner? Wait, how can you fit a platinum mine under a tree? Oh, it’s underground, that makes sense. Is she done masturbating yet?

It’s diffused the uncomfortable situation 3/10 times. I’ll take it. I have no choice but to take it.

– Random Christmas Memory #1279: I opened the door to the car. I got into the car. The car drove away with me in it.

– Months ago, I matched with a girl on Tinder. In a quasi half-hearted attempt to troll, I introduced myself by saying that “I’m considering getting a tattoo of Tommy LaSorda getting hit in the nuts with a football”. She thought it was a great idea. We played mini golf. We fell in love. She gave me a Christmas gift. It was this. 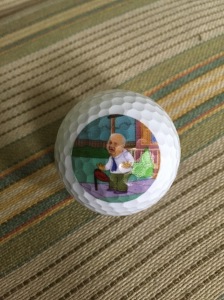 To top it off, she’s commissioned a Simpsons artist to render the tattoo design for me. My girlfriend can kick your girlfriends ass. Because your girlfriend is a hand. And your hand’s ass will be kicked. She also won an Emmy. Where’s your hand’s Emmy? What, nowhere? That’s what I thought. Chump. GIVE ME YOUR SANDWICH.

– This edition of Letters From Coze goes out to Santa Claus:

YOU’RE NOT THE REAL TIM ALLEN! MY GIRLFRIEND CAN KICK YOUR ASS!

PS: Please don’t hurry down the chimney. Go at your own pace.

– Random Christmas Memory #43: After my sister fell on the tree, I watched Beavis & Butthead and the new cordless phone rang.

Die Hard doesn’t count because the whole thing takes place on Christmas, thus making it a Christmas movie. Just like Independence Day doesn’t have shit to do with fireworks, BBQs and drunk white people.

I have also said for years that Screwed would make this list. Screwed is a very special movie for me. For those that don’t know [mainly everyone], it’s a situational comedy starring Dave Chapelle, Norm Macdonald and Danny DeVito. I know, that sounds amazing and I’m sure it’s…uhh…I’m not sure. I watched it on repeat when it first came out and haven’t since. Throughout the years, I’ve made references to it, only falling to deaf ears. Nobody has heard of it. It was panned by critics and was an ultimate box office flop that never found an audience on home video. Now that I know these facts, I’m afraid to watch it again. I’m afraid to admit that I really enjoyed a bad movie without even knowing that it’s bad. I’m sure everyone feels the same way about Jerry Maguire.

– Random Christmas Memory #4287: I was handed a present. I opened the wrapping paper. It was a box underneath.

– Random Christmas Memory #72: I burped. Somebody looked at me. I said “excuse me”.

– Random Christmas Memory #933: I woke up. It wasn’t quite time to wake up yet. I went back to sleep.

Try this trick over the weekend: String Tinsel, lights and other aesthetics around a Fiji Water Bottle.