This is not to be confused with a Free Wine Blog/A Wine Blog That Is Free. The wine is free, but the blog is going to cost you. Don’t worry, I’ll send you an invoice. Yes, by reading this disclaimer, you have already agreed to pay me. This also shouldn’t be confused with Shitty Wine Blog, which is the far superior blog I am lampooning. If you want better writing about terrible wine, go to that blog and disregard this one. Brittany actually knows what she’s talking about when it comes to kitsch beveraging.

I don’t think my roommates care for me much. I’ve been blasting The Beach Boys out of my room for the past few mornings. It’s not a very pleasant thing to wake up to at 10 AM, considering that my roommate goes to bed only a few hours prior. I feel kind of bad about it, but it’s the only thing that blocks out my feelings of impending doom. It’s a coping mechanism, as is drinking free wine and watching baseball, an activity that my roommates may or may not be aware/sick of. To give them a rest, I decided to drink some free wine on location. More specifically, in Roscoe’s Luxurious Chelsea Apartment™. After all, this time I had traveling wine. That’s right. Finally! A wine with a screw cap!

You can just read the excitement on my face. It’s Sciara Flori Del Sud with their #1 hit single, Nero D’avola Terre Siciliane Indicazione Geografica Protetta! With my basic knowledge of French, I can assess that the winery name translates to Sud Flowers of The Sierras. So this is a California wine, eh? Haven’t had one of those in a while. What’s weird, however, is that it claims to be a product of Italy. So they must grow the grapes in Cali, ship them to Italy and then the final product is exported to D&D Wines in Manhasset, NY. You know, the fancy wine importer. Seems like an awful lot of work for wine that’s going to be given away for free, but what do I know, I don’t even like wine. The name of the wine roughly translates to “Nero Flies Over The Sicilian House and Indicates The Geography Of Africa For His Project”. What a stupid name for a wine. Here’s a better one, “Cassius Goes Under The Diner To Proclaim Cancer Awareness”. I should be a wine namer.

– This wine was so forgettable that I forgot what it even felt like to taste it. It’s only been 36 hours! Thank god I scribbled down some notes. From the scribbles, I can make out that the initial smell was “generic sweet”, followed by a taste that can only be described as “candy flavored”. I still can’t think of an example, but it tasted like a product that doesn’t typically taste like candy but has a limited edition candy flavor. It tastes like what a candy store looks like. That doesn’t make any sense.

– Upon further gulps, it tasted more like a store-brand grape popsicle, followed by a bitter sting. It was one of the harshest stings I’ve ever felt in a wine. It straight up felt like I was drinking candy flavored vodka. Like UV Jawbreaker or something. I’m sure UV has a Jawbreaker flavor. Right?

– Roscoe recommended that I use an Air Raider for my second pouring. After assuring me that it wasn’t named after a Limp Bizkit song, he explained that it makes the wine taste like it’s been sitting out for a half hour. Fabulous. Like I really want my stale wine to taste staler. 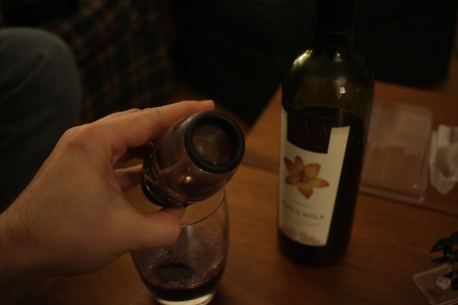 Basically, it’s a small dildo that you pour wine into. The thing makes a growling noise, like an angry cat being tickled and the wine comes out of the other end, looking all sorts of fizzy. Great. Carbonated wine [wait, not carbonated. I’m saving the carbonated wine for the next blog]. What this performed was reverse osmosis [which is something that I proclaimed at the time, already too buzzed to care about the fact that I was grossly misusing the term] and the taste palette went from burning to sweet. It tasted exactly the same, except the cycle of meh was reversed. It made me forget about the screwcap. Cool trick, Air Raider.

– An hour later, upon arriving back home, I drank the rest of the bottle [because screw caps [!!!]] and for some reason, it tasted a lot like banana Laffy Taffy. That makes sense.

The spirit of this wine comes from an Applebees in Memphis. Dale walked in and scanned his eyes around. She was sitting in the corner booth, wringing her hands. Betsy. They haven’t spoken for years and judging from the way Dale hesitantly sauntered to the booth, they could’ve gone a few more. She ordered a side salad, he the ribs. Their small talk turned into dramatic pauses, of which didn’t seem too dramatic amongst the Blue Moon-Swilling Casual Sports Watchers and Crying Children. They were just part of the scenery. The food finally arrived and Dale immediately dove into the ribs, in effort to avoid any window of conversation. But Betsy still instigated. “Now that’s some real Memphis Barbecue right there, aint it?”. Dale nodded in agreement. Somewhat resembling the real thing, but with a warm familiarity. And for a moment, they enjoyed each other’s company. Outside, Bill put on his skimask, cracked his knuckles, exhaled deeply and drove away. His work was done.

– This wine was enjoyed easily. Not because of it’s candyriffic taste, but because Roscoe’s beverage was much, much worse. As I imbibed on my free libations, Roscoe struggled mightily with choking down a non-alcoholic beer endorsed by M.A.D.D. themselves. It reeked of soy sauce and tasted like tofu water. But don’t take my word for it. Read for it yourself in his upcoming review [Nudge, Roscoe, nudge]!

– When not discussing how terrible our beverages were, we discussed the fine arts. I gave him my thoughtful review of the Broadway Musical rendition of American Psycho:

I think that about sums it up.

– On the way home, I immediately caught a train [a rarity in the 11:30-Midnight timeslot], squeezed into a seat and blasted some Beach Boys into my earholes. This cute girl sitting diagonal from me was looking right in my direction, totally amused. Does she know me? Do I look funny to her? Like haha funny or good funny? What I didn’t realize was that there was a very attractive man sitting next to me and what he didn’t realize was that an orange fell out of his bag and was rolling across the floor. Ahahahahah. That’s so funny. Oh, when things happen to attractive people. What a laugh. I briefly considered trying to one-up him by letting my wine bottle roll out of my bag, but I deduced that:

a. It would not be very funny
b. It would be rather dangerous
c. Nobody would notice because they’re too busy still being amused by the handsome man
d. I’d lose the rest of my wine

Instead, I sat there and listened to “Help Me, Rhonda” on repeat. That song is catchy as hell. It’s also relatable, because there’s been numerous times in my life where I’d be praying for a Rhonda. I could really use one right now. Still never met a Rhonda. Where in the fuck is Rhonda?!?

– When I got home, I prepared some Pizza Rolls and gazed out the window. In a fleeting moment, I was convinced that a saw a child clapping, but it turned out to be just a tree branch.

– I also became startled when the microwave went off. I realized that the chime is the same exact note as the whistle in “All Summer Long”. My microwave loves The Beach Boys.

– I then decided to start playing GTA V again. I forgot how long it takes to install that stupid game. I sat there for over an hour, sipping on my Laffy Taffy and watching a bar slowly crawl. I woke up at 4 AM with the game fully installed and my wine glass empty. Good riddance. Good night. Good everything.

Nero Flies Over The Sicilian House and Indicates The Geography Of Africa For His Project: Goes good with waiting for stuff to install!