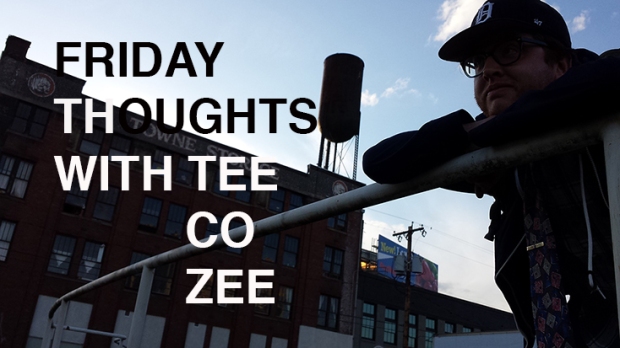 Good Moleman. Please drive off me. It’s Friday, April 15, Two Thousand and Sixteen. The weather in Brooklyn is 55˚ & Pantone 2717U and somewhere, somebody is lost in the woods. He hasn’t seen civilization in days. He would kill for a Big Gulp. But who would he kill?  He hears a plane overhead. The first noise in days. At last, he’s no longer lost. Little does he know, the plane is also lost. Little do we know, we’re all lost. Except me. I know my way around a 7-11. I also have some things on my mind…

– I’m not the type of guy that runs into my exes. Usually, I see them coming and stop accordingly so that there’s no collision. On the other hand, I find it to be awkward as balls when I run into my former Deli Grillmaster with someone elses sandwich in my hand. You have to coyly say that you’ve been on vacation for 6 months or you moved out of the neighborhood or something. But then when he questions the sandwich in hand, you have to spill the beans. This guy uses more cheese, he doesn’t burn the bacon as often, his eggs are shell-free, the credit minimum is lower, he’s not as easily distracted, he doesn’t blast music, et cetera. By the end of it, you have a crying Grillmaster on your hands and you’ve lost your appetite. I should just cut Grillmasters out of my life altogether.

– So I was getting a sandwich from my old Grillmaster today and there was a couple of other white people waiting. The girl was wearing platform shoes as if as if the year was 199fuckyou and the guy was dressed like me, if I were okay with paying $80 for a shirt that should cost 50 cents. So we’re standing there and the girl sneers at me. Apparently, I’m encroaching on her personal space. But she makes no effort to move out of the way, she just stands there, fuming. The guy keeps pacing around the same 6 inch radius like a dog with a shock collar. Upon paying for my sandwich, they placed their orders. That’s right. While the Grillmaster was making my sando, they were waiting patiently for him make eye contact with them. I went outside and saw 3 people giving dollars bills to 3 different homeless dudes on the same damn corner. White people are too soft. After being awake for 20 minutes, I’m already sick of them.

– Since I quit smoking, I’ve gained this tic that causes me to think that yelling at people is hilarious. I yell at my employees all the time and in my mind, they know that I’m joking. Usually it’s because I’m yelling at them about stupid stuff like having bad posture or not having sex with my wife. Usually, my management style is laissez faire, as I kind of really hate conflict [which is a bad quality to have as a manager, but whatever]. Yesterday, I yelled at one of the kitchen workers for eating too much. In my mind, I was joking, because I was. A few minutes later, the chef came up and thanked me. Apparently, I scared the living daylights out of him and he immediately dropped his food and started working. I guess I have a new management technique. I will now pretend to be mad at people for things that I’m actually mad about. They learn a lesson and I have a good laugh afterwards. It’s win-win!

– What does the living daylights mean, anyway? Daylight is not an actual organism. It doesn’t live like us, it’s actually consistent and eternal. To the wikipedia!

The living daylights is an archaic idiom in English believed to be early 18th century slang for somebody’s eyes that subsequently figuratively referred to all vital senses.

The earliest recorded reference to this term comes from the 1752 novel Amelia by Henry Fielding, in which a character states his readiness to physically assault a particular woman: “If the lady says another such words to me … I will darken her daylights.”

That’s right. A saying that was pioneered by abuse and misogyny. That’s What’s Up™!

– I experimented with a new concept for a set last night. I did a full 4 and a half minutes of me not making fun of myself. Bizarre, right? In fact, at some points I even defended myself or claimed that I was better than others. The result: I actually talked to people afterwards. My social anxiety was temporarily lifted! I went to the bar next door and chatted it up with 5 strangers about shit they don’t even care about! I even talked to my Uber driver about politics! I don’t even know anything about politics! So there you have it, the end-all cure to social anxiety. Just don’t insult yourself out loud and strangers will find you more approachable. Take it from me, I’m a total shitface dumbass dummy dumb-dumb good for nothing sack of bungholes that sucks at Fantasy Baseball!

– This week’s Letter From Coze went out to Juli, a girl who claimed to “like to do all those things everyone writes on here”:

So that means you’re into brunch, traveling, puppies, your bike, podcasts, satanism, some specific form of alcohol, seeing what Brooklyn has to offer, hanging with friends, shows, art galleries, nature and [insert something “random” that you think makes you distinguished, I.E. pizza, bing a nerd, a certain sport, Bill Murray, et cetera ad nauseum], right?

She didn’t respond to me. I don’t see why, I just cut her genericy down to size. That’ll teach her to Super Like me! Muahahahahaha!

This week’s edition of Ad Nauseous is brought to you by Penn South Social Services:

Why is the top of her head talking? Is that a way of showing that it’s coming from the brain/thinking? Because there’s a different bubble for that. Also, that lady does not look like a Sonia. There’s no way that her name is Sonia, I will not accept that. Regardless, the Center has a computer room. What in the hell is the Center? I’m assuming that since “the” isn’t capitalized that it should be just referred to as “Center”. So, what is Center? Where can I find Center? This question is more perplexing than the original one posed. But it has a computer room and when there’s not classes, they want to figure out how to let people use the computers. They don’t want to figure out how to use them, rather they want help in figuring out how to get humans to sit in from of a computer. These people at Center have some really big issues. So they’re gonna schedule a meeting amongst themselves to see how the computers can be used. Then they make a call to action to contact them and give them some hints as to how they can let people use computers. After all, us Americans must work as a team.

In a nutshell, this ad states that:

– Try this trick over the weekend: email your boss in Comic Sans.

Have a humorless weekend, everyone!