This is not to be confused with a Free Wine Blog/A Wine Blog That Is Free. The wine is free, but the blog is going to cost you. Don’t worry, I’ll send you an invoice. Yes, by reading this disclaimer, you have already agreed to pay me. This also shouldn’t be confused with Shitty Wine Blog, which is the far superior blog of which I am lampooning. If you want better writing about terrible wine, go to that blog and disregard this one. Brittany actually knows what she’s talking about when it comes to kitsch beveraging.

I don’t normally drink wine, but when I do, it’s because somebody gave it to me. This actually happens somewhat on the reg/much more often than free beer, whiskey, consultations or Willy. After all of these years of drinking free wine, I feel like I need to capitalize on my dumb experiences. And last night’s Free Wine was dumb. Our subject: 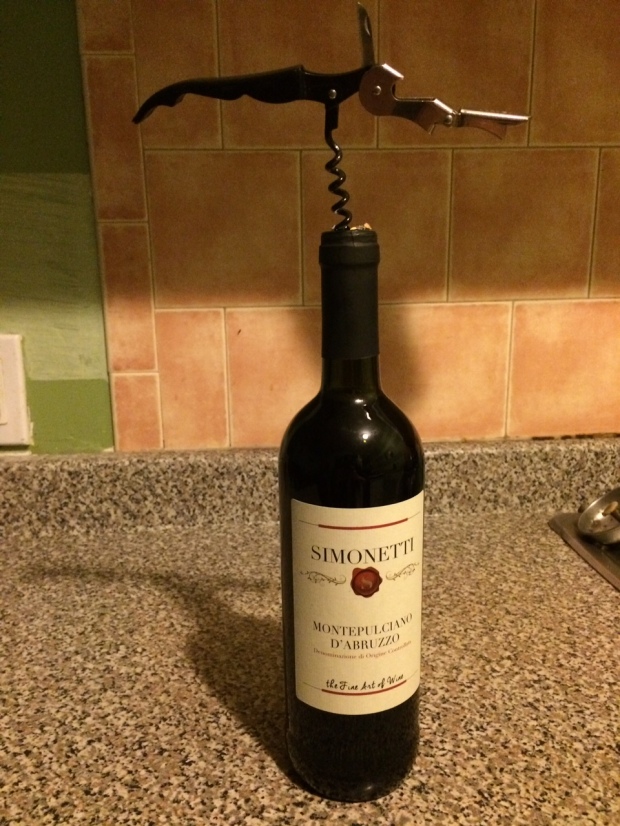 Behold! The 2013 Simonetti Montepulciano D’Abruzzo! For the record, I have no fuggin clue what that means. Is that the name of the winery? [err Vineyard? What do they call Wine Farms, again?] Is it Simonetti Farms, in association with Montepulciano Productions Presents, “D’Abruzzo”? I’m not Italian, so therefore, I don’t know. [I just looked up the answer, but I’m not going to bore you with it. Educate yourself, dingus.] The bottle also states, “Denominazione di Origine Controllata”. With my 3 years experience in basic French, I can say with confidence that it translates to, “Originated From A Controlled Demon Zone”. So this is Demon Wine. Great.

The bottle had a cork in it, which I find to be annoying. I am still a novice at corking. [I also don’t share my free wine, so that means the bottle has to go straight down the hatch in one sitting. My favorite wines have screw-caps or aren’t affected by tin foil re-covering.] To my disdain, I found out that my wine key has a small knife in it, which almost went straight through my hand. Why would you put a knife inside of a basic corkscrew?!? I know that BFD Affiliate, awkwardhaikuhr69, does some stupid thing with a knife that I’ve never paid attention to. But that’s advanced shit. If you want to do that, get a knife. Stop trying to hide them everywhere!

I also drank the wine.

– At first taste, I got a hint of dusty lingonberries.
– At second taste, it felt much more like weak vodka [like, Utah vodka or something] and sugar-free Kool-Aid.
– I paired it with a Prosciutto Sandwhich. This did nothing to accentuate the flavor at first, but eventually, everything started to taste like a rare steak.
– By the end of it, it tasted mostly like hollowed-out berries. This is also known as Berry Skins. You ever eat just berry skins? You’d love this wine.

I think Earth-Feel is a thing, right? A lot of people describe the wine with its “Earthy” tones and then pretend to feel what was going on while the grapes were being wined or whatever. I dug deep and found that the Earth-Feel was located on the mean streets of Chicago. Leopold walked into the Polish butcher shop, but the man inside told him it was closed. Closed at 5:00 PM? These people are living in the past. Shit. Where is Leopold going to get Kielbasa at this hour?

– At first, the wine took me back to a time where I would have to drink wine to fit in. I remembered all of the uncomfortable dinner parties and Christmas masses. Now that I’m older and wiser, I now know that yes, I still have to drink wine in order to look cool.

– Immediately after pouring my first glass, Johnny Cueto allowed 3 runs and a line-drive to the head after 7 pitches. It seemed fitting to my experience.

– At one point, my roommate came home. She seemed amused that I was drinking wine and we had a brief conversation about gluten. It was probably the least awkward exchange we had all year. If I ever need to talk to her again, I’ll have to make sure that I’m half a bottle deep.

– I spent 20 minutes asking Siri the height of different famous people. It was then that I discovered that 18 out of 43 Presidents have been 6 feet or taller. Donald Trump is 6’2″. Bernie Sanders is 5’11” [which is highly debated]. We’re doomed.

– I fell asleep while playing Pokemon Yellow. Had a dream that the Metropolitan Museum of Art was deep underground on Houston St and had a wide selection of WCW VHS tapes for sale. I then woke up, chugged a can of Aranciata and went to bed.

← I’d Rather Not Double Bag My Bag Of Bags [Friday Thoughts With TeeCoZee]
Free Wine Blog II: I Hope It’s Cherry 7-Up →