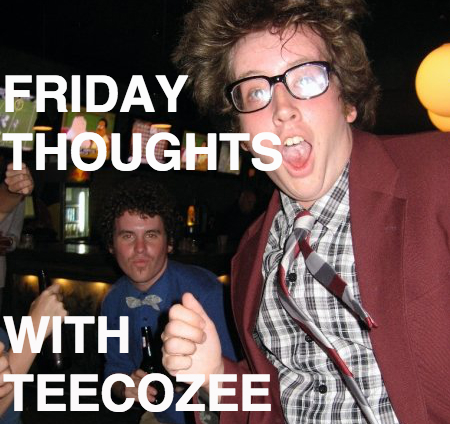 Good Meringue. What the hell is a meringue? Sounds like jewelry for chronic mumblers. Get out of my office! Yes, I know it’s a car! It’s Friday, December 4, Two Thousand and Fifteen. The weather in Brooklyn is 52˚ & cloudless and somewhere, somebody is in a room full of people. None of them speak his language. He tries to talk slowly and mimic, but nobody comprehends. He is truly and utterly on his own and nobody is going to hold his hand as he continues his quest to buy a universal remote control. I also have some things on my mind.

– I got an email from Apple that sent a chill down my spine. The headline was that the new Coldplay album is out. For a brief second, my mind slipped to a terrifying place where Apple was going to download the new Coldplay album to everyones phones. And then when you try to delete it, it doesn’t go away. And everywhere you go, Coldplay is going to be right there with you. Sitting in the cloud. Watching you, snickering, making 40 year old women cry while simultaneously crushing your dreams. They will be prone to Butt Playing, so any social/romantic/action situation can be rudely interrupted by the crooning voice of our generation. Then, I realized that Apple wants me to buy the new Coldplay album. Whew. Thank God. Despite their track record, Coldplay still hasn’t stooped to U2’s level.

– This week’s letter from Coze went out to Anna:

“Finally. Somebody that could care less whether or not I like animals. What’s next? You also don’t care that I don’t have a passport? Swoon.”

Of course, she never responded to me. With that said, I’ve been going through this weird phase in my life. I keep on chatting up girls on Tinder and then dropping out of the conversation completely. It’s a weird feeling. I think it’s called having self esteem. Some addictive shit…

– I got an email from Yahoo saying that my fantasy season isn’t over. Yes it is. Don’t tell me what’s real and what’s not. You have no say in that, Yahoo. Go home.

– This doesn’t actually qualify as an Ad Nauseous segment, but I have a really big problem with a particular brand mascot. Her name is Mrs. Thinster and she wants you to eat cookies.

At first glance, it’s totally innocent. A moderately attractive late thirtysomething in a dress is saluting you with a cookie. Cool. Look closer. There’s a ring on her hand. Yep. After all, her name IS Mrs. Thinster. This minute detail speaks leaps and bounds. 99% of the time, cookies are being sold by old women [dubbed Grandmother, because she has to have kids that have kids in order to properly make cookies], cartoon animals [who probably aren’t able to digest cookies without further complications] and little girls [did Debbie’s parents get in trouble for child labor? Seems like she worked an awful lot…]. This company decided to make their mascot more relatable. Somebody that was our age, presumably listens to NPR and is the most punctual in her brunch crew. They could have left it at that and deemed her Ms Thinster. But they couldn’t do that, because she had to marry Mr Thinster. Duh.

Basically, what I’m getting at is that I know quite a few single people that are adequate at making cookies. Why must it be that a woman is obligated to be part of an outdated institution [or have some sort of relationship with children, whether it be mom, grandma or aunt [or be a child]] in order to be taken seriously in the baked goods industry? Did Betty Crocker go through these same tribulations? Seriously, what is the merit of putting a ring on her finger? Does it make her more trustworthy? Do we figure that her cookies must be fantastic, or else nobody would ever love her? What happens when she gets a divorce [I was once told that Phin & Pheebes broke up, only to realize they’re not real people. I was briefly flummoxed]?

You can see it in her eyes. She’s not happy. That smile is painted on badly. It’s so forced that it’s causing her eyes to well up. She doesn’t even like cookies. She’s gritting her teeth, waiting to spit her bite out. This isn’t the life for her. She wanted to be an artist, but instead, she’s succumbed to Sunday Dresses, pearls and cookies. If only Mr Thinster wasn’t so good to her, she wouldn’t have had to give up her identity. Instead, she veers her eyes to the right, just to see if anyone can notice that she’s a sellout fraud. The American Dream can also be a nightmare.

With that said, they are addictively delicious cookies. I highly recommend you try them, even if you don’t believe in matrimony [or monogamy].

– There’s a mysterious spoon shortage in my household. It started years ago, when we suspected that a mysterious dude with sunglasses was taking all the spoons home with him, piece by piece. But when Sunglasses stopped coming by, the spoons kept disappearing. All 3 of us agree that this is a problem that needs to be addressed, but given that context, there must be a 4th person stealing all of the spoons. We’ve lost at least 15 this year. I’m afraid to buy more, because I truly don’t want to know the ugly truth. Last night, it occurred to me. I was in a bathroom that had a vintage sink fixture. You know, the one with the white handles. The one that became Freddy’s Claw in Nightmare 3.

After making this connection, I suddenly felt a lot of pressure in my chest. Something I’ve never felt before. I was sure that I was dying, but I kept on pacing in a circle. I discovered something profound, something I wasn’t supposed to figure out. The bad vibes eventually subsided, but I woke up in the morning with cuts on my legs. That must be it. Freddy Krueger is stealing all of my spoons and if I don’t have any more for them, he gets stabby. Eep. Staying alive is expensive.

Try this trick over the weekend: Learn how to play the spoons. Or the fool. Whichever. It’s your life.

Have a musical weekend, everyone!

← Moore Of The Same: Watching James Bond For The First Time – Part 2
I’d Rather Live On The Corner Of Secks St and 4th Base Blvd [Friday Thoughts With TeeCoZee] →