Moore Of The Same: Watching James Bond For The First Time – Part 2

My life has been in disarray this week. I’ve become a lot more paranoid and suspicious about the world around me. When I come home at night, I inspect small objects to see if they’ve moved or not. Whenever I see someone acting strange, I know it’s a decoy so that something much worse could take place. I no longer trust my Eastern European boss, because no Eastern Europeans should be trusted [especially those with power]. I’m constantly confused by the fact that women don’t throw themselves at me.

Why is this happening to me?

– Okay, Jaws is simply a badass. The dude is over 7 feet tall and has metal teeth. METAL TEETH! That’s like having hammers for hands or a laser face! Except, there’s one problem. Jaws has a weakness, one that puts a fatal flaw in his character: He’s acting in a PG movie and a light one, at that. He can chew through locks or fences, cool, but when it comes down to killing people, he’s limited. His death method is to grab somebody by the shoulders and [essentially] kiss their neck. There’s so much potential terror and yet he’s not allowed to use the gifts that satan gave him! There’s one scene in particular where Bond and Cube are escaping Jaws via utility van. It takes them so long to get away and Jaws just slowly rips away at the metal of the van, feigning a posed threat. If he was actually allowed to do his work properly, they’d be dead in an instant. But instead, he just passively picks away at metal, waiting for them to escape. Because after all, nothing matters to Jaws. He’s been reduced to a cartoon vampire.

– In the beginning, we see a submarine with [seemingly] British people go under attack. Then, it cuts to news being broken about a Soviet submarine disappearing. This left me confused, but everyone assured me that it was just a Soviet sub that disappeared. Yet, everyone was drinking tea and playing chess, predominantly typical activities for both respective nationalities. I was perplexed. And according to Wikipedia, yes, there were 2 subs that disappeared at the same time. Why they didn’t mention it/why this detail matters is a mystery.

– Wait a minute. Capturing subs? A ploy to start WWIII? This sounds too familiar. Oh yeah, because the whole scheme was copied from You Only Live Twice! I realize that these movies have their signature similarities, but these baddies should realize that it’s really hard to convince 2 nations to turn against each other and causing global warfare. They should probably stick to a more sound plan. Like blowing everyone up themselves.

– The opening ski chase is so money.

Not only is the driving score slammin, Bond uses his stick as an exploding arrow[?] launcher. And then he basejumps off a cliff. How much more badass can he get?!? My only concern is where he went after that. He’s off the cliff, cool, whatever, but does he even know where the hell he is when he lands? It could’ve took days before he found civilization. This scenario happens a lot in these films, but it’s never shown. A realistic Bond movie would probably be 12 hours long, as every detail of his adventure is captured. Or maybe they should make a film entirely of what would happen in between scenes [driving, making phone calls, eating, screwing, scheming, running errands].

So, a space shuttle is captured? So Bond gets on a plane to look for it, but then Jaws attacks him and he’s thrown off the plane and ends up stealing some other dude’s parachute mid-air? And this dude, Drax, made the space shuttle that was captured, but is also, like, a bad dude? Right? Him and this fox named Goodhead [huh?] decide to go to Venice and then Rio De Janeiro to investigate Drax? And I guess he’s gonna hijack his own shuttle to release poison gas into the atmosphere? And I guess he already started a master race to take over after the gas does its thing? Am I getting this right? Laser fights? Bondness? What in the hell was this? If the movie wasn’t such a drag, I’d care about getting these questions answered.

– This is one of the drawbacks of “theme sequels”. Riding the coattails of Star Wars, audiences were hyped to see James Bond in motherfriggin outer space! Just like all theme sequels, we are forced to sit through 75-85% of the movie before he actually gets there. A Bond movie shot completely in space would be sublime [and probably cheaper than what they did with this piece of garbage] just like I would love to see Jason Voorheis terrorizing Manhattan for 90 straight minutes. Instead, we get bored to death and then when we finally get what we’ve been waiting for, the film has already lost us.

– It was nice to see Jaws dropping in for this flick, but his role was even more limited. He simply used his presence to help escalate the plot, but then he suddenly turns good and falls in love with some rando nerd chick. I had to confirm with my friend that that was actually going on and yes, yes it was. Apparently, the producers were getting too much fan mail from kids, wishing and pleading [as twerps are ought to do] for Jaws to be a good guy. COME ON! The character was already tamed enough for a general audience, they really felt the need to make him tamer?!? I guess it’s a good way to further throw a wrench through Drax’s scheme: have a female of his master race mate with a freak of nature. That’s some cold-blooded revenge…I guess…

– I watched this one with a friend and his two year old daughter. As suspected, this movie is not interesting to toddlers at all. Even when he was T-Boning boats in Venice, it could not get her attention. One scene did intrigue her, however. It was when one of Drax’s dogs was chasing down one of Bonds foxes. I warned him to take her in the other room, so she’s not scarred for life by seeing a chick get eaten by a dog. His response:

“Good call. I never thought about that. Maybe I shouldn’t have watched Event Horizon with her.”

Hearing him say that was the only redeeming quality of Moonraker.

For Your Eyes Only – 1981
For some reason, there’s a device that controls all of the Royal Navy’s submarines. The device goes missing. Bond and his fox look for the device with some Greeks. They find it. Bad guys take it from them. Rinse, lather, repeat. For a movie that appears to have a lot going on, there sure isn’t a plot.

– It took me three tries to finish this one. Much to my chagrin, I kept falling asleep. The whole thing kind of washed over me. From what I’ve seen/remember, the action is mad solid and the story never goes over-the-top. This is definitely one I’m going to revisit later, when my brain isn’t slowly burning out.

– The opening sequence is just friggin perfect. Hands-down, the best Bond opening ever and should be in the Top 10 of all-time greatest movie openings.

It’s a call of arms for Bond to return back to form. After Moonraker got in over its head, it was time to buckle down and start making some serious films. But then that formula got thrown out the window for the next film…

Bondery runs wild as the Soviets try to smuggle a bomb posing as fake jewelry posing as real jewelry [posing as fake jewelry?]. I have no idea why it’s jewelry, but it leads Bond to team up with Octopussy and her circus of foxy foxes. Essentially, it’s the type A Bond Plot: Bad guy tries to attack one country under disguise of a different country, thus plotting a World War. [Wheras Type B is to destroy the world and start a new one, which is usually aided by plot type A].

– Even though the story kept on losing me, there were plenty of gags around every corner to keep me interested. Bond goes to a mysterious island/manor where he’s immediately welcomed with open arms. Huh? Well, it’s swarming with foxy foxes! There’s some dude trying to kill Bond with a saw. Wait, why? Well, the saw is also a yo-yo! Nice! Bond needs to infiltrate the circus. Juh? Well, he dresses like a clown! Isn’t that hilarious? For every question you might have, you get distracted by a pleasing non-answer.

– One of the villains looks and dresses similarly to how Bond would. In early scenes, I was getting the two confused. And then I was thinking to myself, “What if he’s Bizarro Bond and he’s scheming to frame him for nuking East Germany?”. After a while, I realized that the film wasn’t smart enough to do anything like that.

Roger Moore’s last foray into Bondering is one for the ages. We meet Bond as he’s recovering a microchip from Agent 003’s corpse [how many agents are even left at this point?]. A ski chase ensues and this time, James invents snowboarding and escapes using his snowboarding skillz. In a nutshell, the indestructible microchip was made by Christopher Walken, who in turn schemes to split the San Andreas fault so he could rule the silicon kingdom. It’s about as complicated as it is awesome. Grace Jones is a roided-out mutant [I think] and tries to put an end to some Bondness. With sexy results.

Top 3 Badass Things That Christopher Walken Did:
3) He pumped racing horses with steroids – Totally ahead of the curve on that one. This was just before juicing became a prevalent problem in sports. In fact, his actions might’ve sparked the conversation. A true pioneer of his craft.
2) He escaped into a cabin/trailer that was actually a blimp. A goddamned blimp!
1) After flooding his mine with all of his miners in it, he decided that the best way to ensure they all die was to kill them himself. The result? 5 straight minutes of Walken shooting unarmed miners with a machine gun, which laughing manically the entire time. 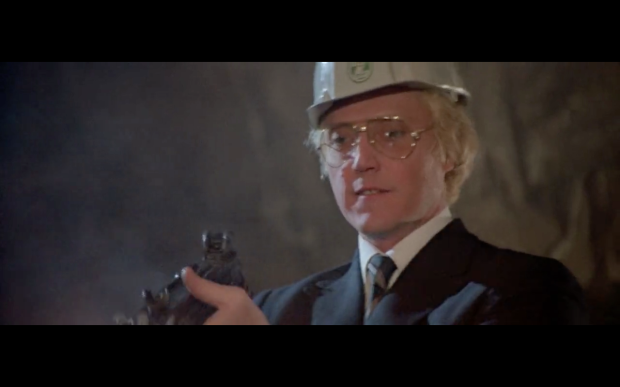 This image will be burned in my head forever as one of the finest frames to be captured on celluloid.

At this point, it was clear that Roger was getting too old for his job. He probably should’ve quit after For Your Eyes only, but shit, what else would he do with his life? So instead, he continued portraying Bond while clearly pushing 60 and bedding chicks that were at least 30 years his junior. It’s hard to not find any of it polarizing or creepy. Roger hung up his shoes and left his legacy as the Bond that was always kind of reluctant to kill people. Luckily, the next Bond would be a man of action and vengeance. And then there’s Pierce Brosnan.

Like Loading...
Category : Movie Analysis and Film Review
Tags : 007, a view to a kill, christopher walken, for your eyes only, james bond, machine guns, moonraker, octopussy, roger moore, sex, the spy who loved me

← Because, Sex: Watching James Bond For The First Time – Part 1
I’d Rather Not Eat A Married Woman’s Cookies [Friday Thoughts With TeeCoZee] →