Season’s Greetings. What season is it? Who cares, FREE ORANGES FOR ERRRRRBODY! It’s Friday, September 18, Two Thousand and Fifteen. The weather in Brooklyn is 85˚ & garlicky and somewhere, somebody is having a hard time lacing up their shoes. Does it go over or under? Does it even matter? Do wrestlers have to lace up their own boots? Thems are some huge boots. Might take 2 laces. Screw it, I have other things on my mind.

– If you’re gonna give a crazy guy a pair of pants, please make sure that they’re not pull-away track pants. I just learned the result the hard way. According to popular opinion and gathered data, the truth still stands that no, it’s still not easy being Cheezy Greezy.

– I woke up yesterday with a weird feeling. Not hung over or food poisoned, but just…weird. I had a coffee, demolished a bowl of Crispex, went for a jog, took a shower and I still had an hour before I had to leave for work. Which made no sense, because I woke up with about an hour and a half to spare. So I played some video games for a while, time still crawling. Made another cup of coffee, scanned the news, bought some shit I didn’t need, still had time to spare. If the clock was to go any slower, I’d have time to develop a formula to dictate what rate it was actually going at compared to how fast it’s supposed to go.

Waited forever and a half for a train. Finally pulls in and the car in front of me has absolutely nobody in it. In our experience, New Yorkers know that an empty train car means:

a. No air conditioning
b. Scary/smelly person residing
c. a fight broke out
d. all of the above

For the first time ever, the answer was:

So we cram into one car to the right and it’s stereotypical pandemonium. There was a group of 4 hipsters, standing in a perfect square with their bicycles, blocking everyone from traversing around the car. There was a group of kids on the other end wearing matching T-Shirts, doing dumb kid shit and being supervised by a sad-looking chaperone. There was a group of loud as hell teenagers obviously skipping class, causing a general stir/ruckus/whatthefuggever. And then parked dead-center, hogging up all of the trains energy, was a rag-tag group of white monks having a jamboroo. None of them were Tibetan or remotely Asian. Just a group of twentysomething white dudes, orange robes, shaved heads with the ponytail, clapping/playing bells without rhythm and groaning melodically. To top it all off, I think they were all wearing Crocs. Meanwhile, I found a seat in the corner and, for reasons beyond comprehension, turned on some Daniel Johnston.

So yeah, just try to imagine listening to lo-fi manic-depressive meanderings while a bunch of Sham Buddhists have a celebration of life. Meanwhile, I gazed out to the empty car, still seeing the reflection of my surrounding insanity as the train crawled around slowly. While underground, I got an amber alert. A lot of us got amber alerts. Either we found a pocket of reception or there’s something about the subway we don’t know. The person across from me saw the message at the same time and then we studied eachother suspiciously. Perhaps I was gazing at the kidnapper. Or maybe I was the kidnapper. Or the kidnapped? Keep staring at the empty car. Find your happy place. The celebration is getting more and more lively. Some teenagers are getting in the face of one of the bikers. White room. Find a white room. Maybe the kid is in the tunnels. That’s why it’s crawling. Holy fuck, that guy just winked at me. Is there a dead body in the empty car? Why are the monks wearing Crocs? Don’t take a bike onto the train. Who walks cows? White room. White room. White room. It’s gonna be fine. You’re a-okay. It’s hot in here, that’s why you’re sweating. Oh shit, somebody’s yelling. THIS ISN’T MAKING SOMEBODY HAPPY. IT CAN’T. THIS TRAIN HAS TO START MOVING. THE MONK IS STARING AT ME. HE WANTS MY MONEY OR MY SOUL OR A SANDWICH I DON’T KNOW WHAT MONKS WANT.

I closed my eyes tight for the rest of the ride. It was the only way. When I finally emerged, I saw a guy get hit by a car with diplomat plates. He obviously had some diplomatic shit to do. Or maybe it was Diplo. What’s a Diplo? I get into work, somehow on time and immediately, someone pulls me aside to say “Hey look, I have a rash” and then proceeded to pull her shirt down. It was one of the most stupid days of my life. That was only a quarter of it.

– The vestibule still reeks of puke, thanks for asking!

– Did I mention that yesterday was stupid? Because it was. I’ve been stressed out about work lately, which I guess is a sign that I’m good at my job, or at least care the right amount. I was smoking after closing and this girl that was clearly out of my league bummed one from me. She starts chatting me up. She’s clearly tipsy from a few too many Fashion Night Parties [whereas, fuck those parties and fuck fashion’s night out, but whatever], but she seemed…into me? So what do I do? Start rambling about work. If there’s a higher power watching over me, he was definitely slow-clapping. Other problem is that if she ever comes back to the store, she might find out who I am and read this paragraph. Somebody take this gun away from me. I’m running out of feet to shoot.

5) Those Old Navy shirts that say the year on them – Why would you want to commemerate what year you bought a shirt? If you’re wearing a 2002 shirt, it says that you’re either overly nostalgic, broke as fuck or can’t read.

2) Shirts that advertise a jean company – Here’s looking at you, Armani. Why would you flagrantly advertise a jean company? You spent all your money on a T-Shirt, so now you’re wearing Wrangler Jeans. Your jeans are made out of cotton and is actually a shirt. Congrats. Is it really a status thing? Does wearing an Armani shirt boost your ego so much that you’re better off letting everyone know it, so it can boost aeven more after you get way laid/paid/filleted?

1) This gem that I saw on the train the other day: 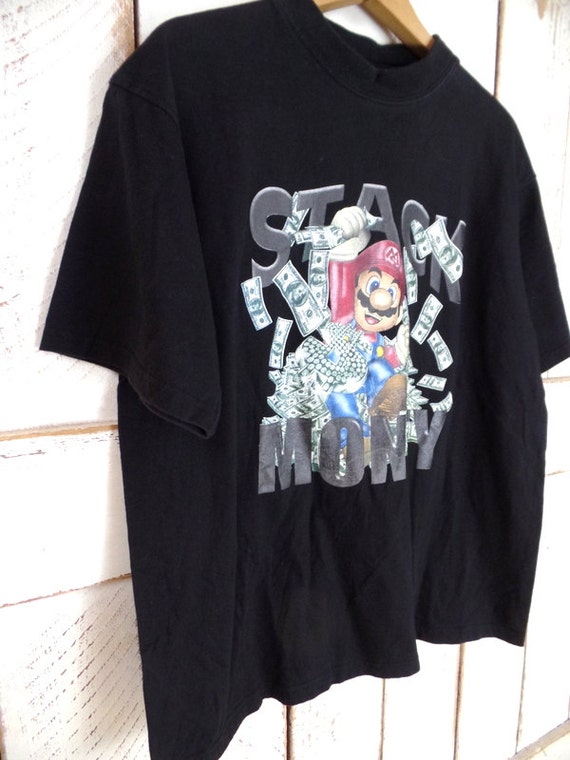 Let’s break it down: You have Mario on your shirt. Cool, fine, everyone loves Mario. Then you have money. Mmmhmm, everybody likes money. But what does Mario have to do with money? I mean, he collects coins. Coins can be changed into bills if he has enough, but we never see that in any Mario game. The shirt wants us to stack the money. Or it wants Mario to do the stacking. I don’t know if you’ve ever played a Mario game, but if you have, you would know that he does absolutely no stacking [the pots in Doki Doki Panic don’t count]. It also appears that he isn’t planning on stacking this money in the shirt, either. It doesn’t even look that stackable. He’s got like 3 hundo and now he’s just running away from the pile of money. What you can’t tell because of the angle of the picture, to Mario’s right is a champagne bottle that says, you guessed it, “money”. So, it there money in the bottle, or champagne? Once again, what does Mario have to do with money? And why is the smallest size XXLT? If you have any answers to my questions, send me an email web message at mailteecozee@gmail.com

In speaking of, this Letter To Coze comes from Matt:

Hey Andrew, long time no see. How you been? It’s Matt here.

Act today and get a $5,730* check that’s available from the US government.

Available for residents of the State of . And I know you’re at least 18 years old.

This means you’re eligible to get money in . While it lasts.

The Andrew you’re looking for lives in . You should be able to find

Eighteen year old Andrew in the state of .

But not in this email address provided to you from

hoping this finds you well and

healthy. For now in the meantime at least

it will be good for you . In the state

– Try this trick over the weekend: Stack money.

Have a champagne weekend, everyone!