I’d Rather Call Her Jenn Jenner [Friday Thoughts With TeeCoZee] 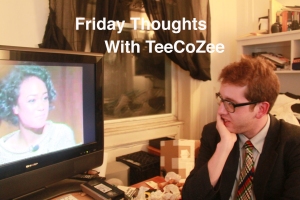 Good AfterMidMorning. It’s Friday, June 5, Two Thousand and Fifteen. The weather in Brooklyn is 58˚ & blegh, I don’t want to talk about it and somewhere, someone is failing really hard at flossing their teeth. It looks so easy on TV and when people tell you how to do it, the typical response is “duh”. But now this person is under the limelight, and for the life of him/her they cannot figure out the proper angle for reaching the mid-molars. 10 minutes will pass with multiple attempts of reaching them, although only 6-7 attempts will actually touch teeth. Afterwards, the person will decide to never floss again. And as for me? I gave up on the years ago. Lousy angles. I also have some things on my mind…

– In the past month, you may have noticed that I’ve been struggling with depression. First, I blamed it on jet lag. Then solar flares. Then my new work schedule. Then it was El Niño. After that, it probably had something to do with girls. Running out of ideas that I legitimately wanted to try to better myself, I took the easiest route possible: I brought the goatee back. All it took was 20 minutes in the bathroom and my life has been changed forever! Immediately, doors of opportunity opened for me to become a better person. I started to think clearer! People started to listen to me! Co-workers noticed that I had a beard in the first place! My neighbors are more accepting of me! I’ll probably get a raise! I might even get laid! Imagine that! Me! Laid! Wow!

Having a goatee has also made me more productive. I shot a good chunk of footage when I was out west, and all of it was growing digital dust until I decided to dust off my face. I went from doing nothing but eating catfish, watching baseball and rolling Katamari’s every night to eating nothing, leaving the baseball game on mute and editing till my heart’s content. The end result: Well, I got one project done so far. This might not mean anything to you, but it does for me. What follows is the first video that I solo shot and edited in over 5 years. With that in mind, please ingest this with your face:

This was a huge feat for me. For the first time in ages, I was actually “in the zone” about something, to the point that nothing else in life mattered. And it pulled me out of a really deep funk. These great things happened to me and more, all because I made a change to my face that I absolutely hate! Yeah, that’s right, I still hate my goatee. As much good as it’s done for me, I think it looks hideous. Which brings on the conundrum: Would you make drastic changes to your body just so people would be more receptive to you? Let’s explore this topic more…

– In a low attempt to garner more hits, I’m going to talk for a while about that Jenner person. Not because I want to, but because I know that’s what the people want. When I first read the news, I was shocked. My jaw dropped. I could not believe that science actually allowed for a man to become a woman. It’s truly a great world that we live in. Now that sex changes are possible, maybe now we can become birds and lizards and George Clooney. Then I had a cup of coffee and remembered that this shit happens to hundreds of people every day. So what in the hell made him so special? Probably nothing. I figured it wasn’t a big deal. I was wrong.

Within the first half hour of work, I heard 3 separate conversations about him/her. Was this guy Governor? Senator? Game show host? Sitcom dad? The subsequent conversation with my boss went as follows:

[whispering] Who in the fuck is Bruce Jenner?

He got a sex change.

Duh. Why does she matter?

Troy, come on, he’s an Olympic Gold Medal winner. You didn’t know that?!?

Okay, thanks. So, who in the fuck is Bruce Jenner?

Well that makes sense. When you win an Olympic Gold Medal, you’re suddenly a household name. Shame on me for not knowing her biography. I asked other people and they gave me the same answer with a straight face. They were hiding something, but I wasn’t going to let it bother me. Days passed and every news headline would only recognize him for his Olympic fame that happened 39 years ago. I finally consulted Wikipedia and uncovered the ugly truth. As it turns out, the whole world is in denial about Caitlyn Jenner. They’re not in denial that she’s a woman, but that they only know her because she was once related to the Kardashians. It all makes sense now. Jenner is only recognized as an Olympic athlete because that’s the only thing he accomplished in his life that people would be proud to associate him with.

Here’s a list of the Top 5 newspaper headlines that seem more appropriate:

Don’t get me wrong, I’m not trying to put down the LBGTQA community for trying to make headlines. I just think that it’s unfair that they’re stuck with a washed-up reality stepfather as their new spokesperson. I would give it 1:3 odds that he only did this because he wanted to be noticed again and he has a shit-ton of money, so duh, yolo. I wouldn’t have been surprised if he gave himself a gimmick name like Jenn Jenner, but I guess the horrendously-spelled Caitlyn is bad enough. And then he threw in another wheelbarrow full of money to make him look 30 years younger. What a brave person. Give me a fucking break, there’s an infinite number of transgender people out there that have much more courageous stories than she does. The only problem is, those people weren’t on TV, so the general public doesn’t care. They only care about Caitlyn, who was on TV. At the end of the day, TV conquers all, always has and always will. Nothing else will ever matter.

Now that I’m thinking about it, getting a sex change would be beneficial to any athlete that wants to get on the better side of the media. Here’s the top 5 athletes that would benefit from becoming a woman:

– In speaking of people giving athletes too much credit, Adrian Peterson practiced for the Vikings yesterday. According to headlines, they were “impressed”. I wonder what they were more impressed about: the fact that he didn’t beat any kids while practicing or the fact that he didn’t complain once about playing for the team. Neither would surprise me, both would impress me.

– Wow, I really hate athletes today. That’s probably because my fantasy team is getting annihilated this week. In that case, here’s a list of athletes I have minor beefs with:

Because of you all, my week has been really hard to bear. Thank you. The check’s in the mail.

– Try this trick over the weekend: Heckle an athlete. They deserve it. Rich bastards.

Have a Swing-Batter-Batter Weekend, everyone!