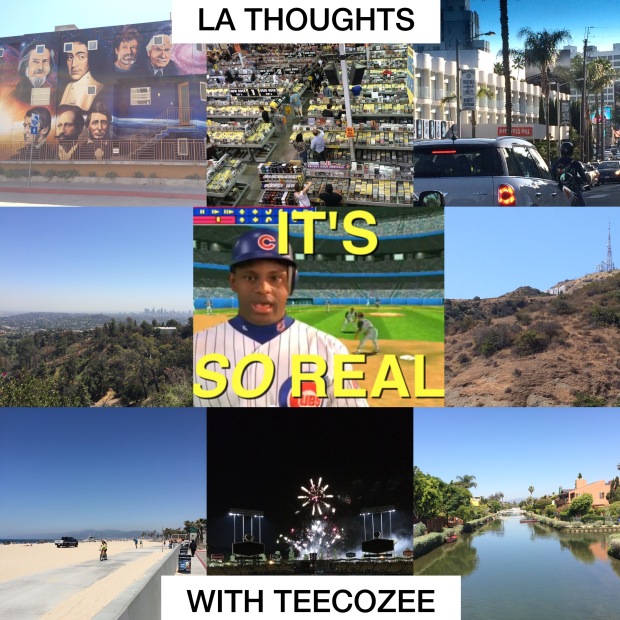 What follows is some notes on LA that I hand wrote while en route to San Francisco. This was planned on being posted the day of, but what can I say, I got distracted, sue me. I was going to post it as soon as I got home, but every time I sat down to do so, the opening paragraph convinced me to slam the book shut. It’s gratuitously open, self-deprecating and out of place. But the point of the paragraph is overcoming fear, which is something I have to do by publishing it in its entirety, so you can enjoy and know way too much about me. Not like you already don’t. Ingest with care.

Have a good day! It’s Sunday, April 19, Two Thousand and Fifteen. The weather in Ballico is 87˚ & sunny and somewhere, about a week ago, I was sitting up in her bed, face in my hands from embarrassment. Froze up and thrown out while running to third base. I told her it’s probably a condition, something psychological. She told me I hated myself too much. I knew it was something else. She needed something easy. I needed something in general. But the feeling got in the way. Days passed and I had that feeling again, sitting behind the oversized wheel of a Nissan Maxima at the LAX Budget parking lot. I couldn’t turn it on. The buttons, the levels, all so foreign to me. It was fear, that was the feeling. I’ve spent my whole life afraid of the unfamiliar. And there I was, shook to death about being in a place I’ve never been, without any real driving experience in the last 5 years. It was high-time to grow up. And after 10 minutes of negotiations, I did. I cruised out of there like an absolute boss. Praise the lord I was born to drive boat. And as for the girl? Fuck it. We had nothing in common. I also have some things on my mind.

– I was strolling by a Scientology Center last night, smoking a cigarette. The camera at the gate moved to follow me walking by and suddenly, my cigarette went out. I tried to re-light it and the tobacco wouldn’t burn. Either the Scientologists actually do have superhuman powers or there’s a reason why Kamel Reds only cost 5 bucks. Both answers would surprise me.

3) A no smoking sign above an ashtray in a subway station. (The tray was also full of butts)
2) “Free Fred Durst”
1) This mural of Hyun Jin Ryu: 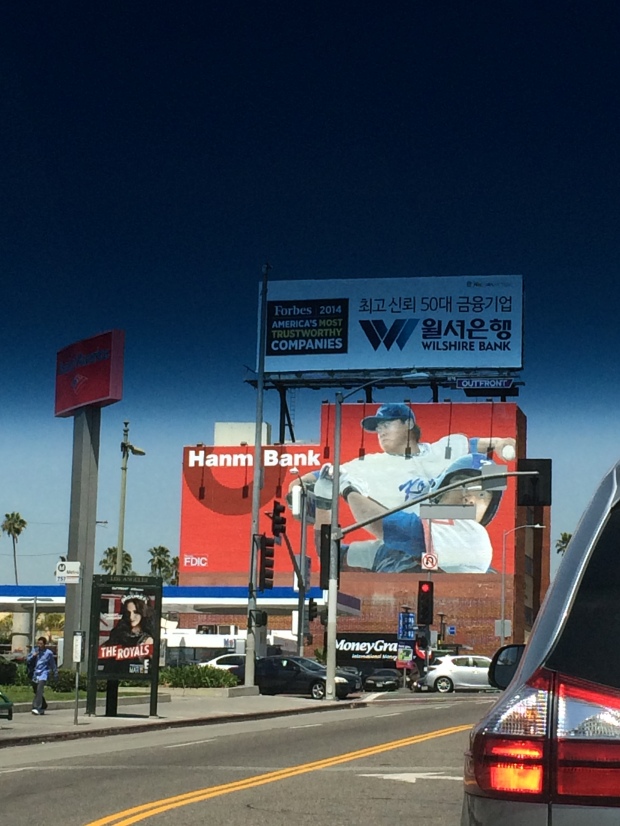 – In search of a good time, I was told to go to Family Arcade on Vermont. Oh, hell no. I’ll give them credit for having some decent imports, but it was all downhill from there. First off, some machines take tokens while the others take quarters. That should’ve been the first sign for me to run away. That, and the overwhelming stench of BO and skater breath. But I had already paid a dollar on the parking meter and had 2 dollars in tokens, so I had to try something. The sign on the Daytona 2 machine said to use the left coin slot. Nothing. Put another token in and I hear a chime, but nothing registered onscreen. Put in another, nothing. So of course, I put one more token in. Nope. The kids were already staring at me from making a spectacle out of getting my fat ass into the raised seat. At that point, I had to get off, pretending to know what I was doing. Then I found a Neo-Geo emulator. Perfect. 400 games in one. Family Arcade, you redeemed yourself. Put in a token. Nothing. Fuck Family Arcade.

– Driving around the first night, I only saw one cop. And I think it was a fake cop. The emblem on the car looked like a mockup of what people in 1985 thought the police emblem would look like in 2015, or vice versa. [Upon further Googling, this logo is nowhere to be found. So yes, it was a fake police car.] Both cities may have Sham Cops, but at least NYC has 3 on every corner. Later, it occurred to me that the only crimes I saw were parking violations. Stay tame, LA!

– I wasn’t totally sold on the LA Nightlife, either. My night started at the Cha-Cha Lounge, where I was promised there would be “red lights, foosball and lots of pbr drinking punky hipsters”. My kind of joint. Although there were red lights [lots of fucking red lights], foosball and pbr, there was nobody around drinking/playing/having their retinas burned by them. The place was patronized by one other person, who was talking to the bartender about a drug bust that just happened. I was clearly not welcome.

Side story: In Seattle, my travel companion and I found ourselves in the same bar. Also named the Cha-Cha Lounge, this place was red-lit and filled to the brim with yuppie assholes, frat bros and the girls that go for them. We were fish out of water, but I had to stay because they played nothing but Talking Heads. All of this dancable music with all of these people and yet, not one miserable soul was dancing. There wasn’t even an open space where a dance floor could possibly be. It was my version of hell. I hope to never experience it again. Some faux-yup-punk motherfucker came up to us and said, “No offense, but you two look like assholes”. It took Mike a while to figure out that it was because he was wearing fake dreadlocks and I was sporting a yacht cap. We literally were dressed like assholes. But in that case, we should’ve fit right in. We didn’t. Fuck the Cha-Cha Lounge, in both iterations.

I did a search for dive bars in my area and both were pretty meh. I would be able to get behind The Frolic Room in theory. I dug the setup and the bartenders seemed like they’d be croontastic if struck with the proper mood. But the place revolves around their jukebox and this particular one was owned/operated/raped by a raging team of middle-aged [insert Cali equivalent of BnT here] weekend warriors. And these lushes wanted to hear “Fireball” by Pitbull twice in a row, while they paid hundreds of dollars in Fireball shots, of course. They demanded to hear it a third time and a few of us peaced out. The bouncer told me that the place doesn’t usually suck. I believed him and still do.

I thought I’d be able to redeem myself by going to the Burgundy Lounge, a highly-rated punk bar that sounds like something out of a Mr Show sketch. They didn’t have holes in the seats for you to poop in, but the bathrooms were very nice and they didn’t have any rot gut whiskey. Wait, what the hell?!? That’s not a punk bar at all! I paid 10 bucks for a thimble of Jim Beam [?!?] and gave up looking for the heart of the Saturday Night. [Instead, I bought a half pint of Beam, watched Going Clear and had vicious nightmares. With the combination of that and the cigarette incident, I woke up with the urgent feeling that I was being followed. I was goosenecking while driving down an empty road, I couldn’t eat at the diner because everyone looked too suspicious, I didn’t feel right until I got on a train and got the fuck out of dodge. To this day, I still don’t want to think about Scientology. Something chilled me to the core and I don’t think it’s going away.]

– Parking is just stupid. Don’t even.

– There’s something inherently creepy about the weather in LA. The whole time I was there, I didn’t see a single cloud, with the exception of the white halo of smog [is this how Los Angeles got its name?] that makes you feel like you’re playing the last level of Katamari Damacy. And that’s how it always is. At the Dodgers Game, they announced the 15 year anniversary of the last rainout. 15 dry-ass years. I read an LA Times headline today that said “Chance Of Rain This Week”. RAIN IS NEWS TO THEM! Now, science tells us that it’s because of the air pressure system that’s sending all of the rain to the Northwest, but I feel like there’s something more to it. Something…unsavory. My opinion? The land was never discovered, it was created. In some distopian fashion, a brilliant scientist/bad janitor created a paradise of the wealthy to live in. He figured that

And the notes stop there. You get the idea. That’s not the last of my LA content, as there’s 2 video projects in post as we speak. In hindsight, I’ve found these thoughts to be unfair. I was in the mindset that I just wanted to write things to complain about, because compliments are uninteresting. I failed to mention how awesome it felt to cruise around Beverly Hills while blasting Madvillain. Totally omitted the tears the rolled down my face as I pulled into Dodger Stadium. You didn’t read about the acid flashback I received courtesy of the Venice Canals. I won’t tell you how entitled I felt after eating a wet burrito for breakfast. Magic Johnson tried stealing my car. Didn’t tell you about that, did I? Oh well. I was once quoted to saying that LA would be a perfect place to move to so I could kill myself, but as time passes, a fondness is growing in my heart. The place might be perfect for a cynical asshole like me. And I’m vaguely planning in my head the next time it could grace me with its presence. Don’t ever change, LA. The drought wouldn’t let you anyway, even if you tried.

Try this trick the next time you’re in LA: Ride the subway and pretend that it’s actually useful.

Have an LA weekend, everyone!