Good evener, Tom Seaver. That’s the name of my new sitcom. It’s about time travel. It’s Friday, February 27, Two Thousand and Fifteen. The weather in Brooklyn is 32˚ & sunny and somewhere, somebody is looking at a world map, trying to figure out where Croatia is. To his misfortune, this world map only names off cities and he also forgot what joke he was going to make about Croatia. That person is actually me, but don’t worry, I have a few other things on my mind…

– I was elated today when I found a skateboard in a trash can. That’s always a good signifier of somebody giving up completely. I’ve seen skis and rollerblades in the trash numerous times, but never a skateboard. As it turns out, the skateboard had no wheels. Which means that somebody threw away a Hoverboard. Who in the hell would throw away a Hoverboard?!? It’s my Hoverboard now…

– I was getting the mail yesterday, because I do that every day. My roommate got some junk mail from The Sierra Club, practically begging her from the envelope to save the wolves: 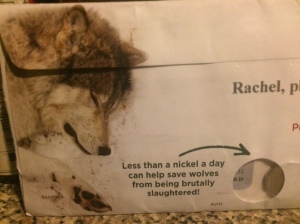 First off, who in the name Joe Peppitone is trying to save the wolves?!? Wolves are dangerous creatures that can most likely fend for themselves. Secondly, how can less than a nickel a day save the wolves from being hunted? Is all of that loose change going straight to the hunters as some sort of deranged buyout? Did The Sierra Club approach them and say “Yo dawg, I hear you like hunting wolves. We aint cool with that, see? So we’re gonna changesource from our members and that’ll collectively give you a few dollars per day. That’s making money! How about you put that gun down?” But the most perplexing this about this envelope is the glaring fact that they included a friggin nickel! If they’re trying to get your nickels, wouldn’t it be wise for them to save their own? I kind of wonder how many nickels they sent out. Probably thousands. That could’ve saved 2.5 wolves! Git your sheet together, Sierra Club!

– Sometimes you have to take a step back and be grateful for your upbringing. You may have had a boring childhood or weren’t allowed to eat sandwiches, but it could’ve been a lot worse. You could’ve been the subject to a Maury DNA test. That’d be problematic. You could’ve had a great father that would’ve loved you and let you stay up to watch Carson. But instead, he became suspicious of your mom being a trifling biznatch and next thing you know, they’re duking it out with Maury Povich. You don’t even get a say in the matter. You won’t even get any screen-time, unless you count the embarrassing picture that they keep superimposing before/after every commercial break. After an hour of scripted bickering, it’s revealed that your father is actually some guy name Q-Ball who won the prize of your mother’s bouillabaisse in a game of dice. His motorcycle proceeded to be “in the shop” for most of your adolescence, as was your pet dog. At the age of 15, you end up back on the Maury after burning down 4 Baskin Robbins for no apparent reason. Maury sends you to boot camp, which is actually a reformed Yogi Bear’s Jellystone Park Camp-Resorts™, where you’re fed nothing but [ranch] Corn Nuts and sing Creed songs by the crappy campfire that you slaved away at for hours until you came to the realization that there’s no point to living anymore, everything is just one big campfire. So don’t come crying to me that you got grounded too much as a kid, because that could’ve been you!

– On a side-note, I’m kind of surprised that there hasn’t been any Maury episodes revolving around the DNA kids and how their parents being on the show affected their lives. Or maybe that’s already happened. I don’t watch Maury.

– I walked outside onto 4th Ave to have a smoke [because I’m actually writing this at a bar, because YOLO] and a Juggalo walked out from next door. He angrily stomped in his JNCOs and moon boots to the corner, turned around and went back next door. He did that 3 times while I was standing out there, with his rainbow dreads flailing in the wind. I guess that’s the life of The Modern Juggalo: always checking to make sure the corner still exists.

– I saw a box truck on my street for Baked In Brooklyn. I said to myself, “Awww ye! I’m baked as fuuuuuuu! And I’m in Brooklyn! Daz mah truck, sahnny!” Then I realized that I wasn’t stoned, so I did 10 pushups.

– This edition of Ad Nauseous is brought to you by Younger, every Tuesday on TV Land!

What are you shooshing me for? Don’t shoosh me! I will not be quiet! What’re you trying to do anyway? What is the point of your show? Is it a secret? That’s a stupid premise for a show. You look old as dirt, and your tourist hat only tells me that you’re trying horribly to act young. That probably is what the show’s about. Now that the cougar fad has phased out [thanks to TV Land running it into the ground], middle-aged women have resorted to trying to be younger. That’s real original! Million dollar idea you have there! But don’t you ever try to shush me, you old bag!

– Somebody in my building got a delivery from Warby Parker today. It was for the trial frames, which is a really good feature they have. A really good feature if there isn’t a Warby Parker showroom in your area. Which there is. I feel like going through the process of picking 5 frames to be delivered, waiting for the delivery and then sending them back only to wait for your real glasses to come in takes a lot more effort than getting on the C trang, riding 10 stops and seeing all of the glasses for yourself. Somebody is really awful at time management. And that person lives below me. Way below me.

– Try this trick over the weekend: Fall in love with a stripper.

Have a Mike Jones weekend, everybody!