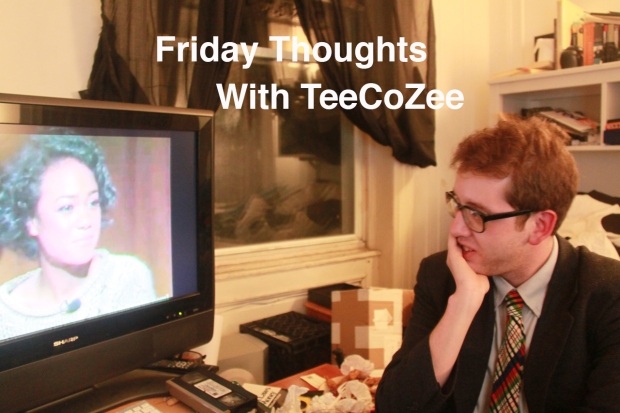 Noon after good. Way after good. It’s Friday, January 23, Two Thousand and Fifteen. The weather in Brooklyn is 37˚ & blindingly sunny and somewhere, somebody is walking into a Carl’s Jr for the first time. To his dismay, there are no half-naked models rubbing buffalo sauce all over their booby sacks, ice cream sundaes cost $2.99 and there doesn’t seem to be anybody named Carl working there, let alone a son of a Carl. But that’s not me. Where I come from we call that shit Hardee’s and nobody goes there, except for models that nobody sees because non-models don’t eat there. I also have a few things on my mind…

– The name Carl’s Jr doesn’t make any sense. Mainly because Carl is pluralized/possessive. So that means that Carl Jr probably doesn’t exist, he’s not a real human, whatever. So what is the name trying to say? Is the restaurant owned by Carl, but instead of calling it a restaurant, he calls it a Jr? Is it a Jr version of Carl’s [restaurant]? Was there even a Carl’s restaurant? Was Hardee his last name? His abusive uncle? Both? Neither? WHY CAN’T CHECKERS AND RALLYS GET ALONG?!?!?

– Every time I try to write, I end up having a sneezing attack, which indefinitely stops me from writing. If I hired a maid, she would double-function as a muse. Then I’d probably fall in love and sneeze all over her.

– My new OKCupid strategy is to find a profile that seems interesting, not be able to figure out what to say to her, leave the page open in a tab and keep it there for long periods of time. She won’t know that I’ve been studying her for weeks on end, unless she had psychic powers. In which case, it’d probably be a turn-on for her and we’d get married without ever meeting. But until that day comes…I wait…

– I went to get some Chinese food earlier, because duh. The place was packed to the gills with teenage girls. As they gabbered away on their cells phones, I wondered where in the hell their teenage boy counterparts were. In school. That’s where they were. Now that girls are deemed the slackers that cut class all the time, I think it’s safe to say that gender roles have reversed completely in the past 10 years. I guess that’s progressive? Stay in school, boys. Those girls are a terrible influence.

– My neighbor has a cat in their backyard. But it’s come to my attention that it’s not a real cat, but a robot cat. It runs on a 30 second meowing loop that hasn’t ceased for weeks. I’m not so much annoyed as I am concerned. Why would anybody feel the need to have the same sounds emit from the yard forever? To ward off prey? What prey? The yard is only 20×20, there’s not much space to protect. What kind of pest would be so devious that it would drive someone to to take the sort of action that annoys the entire neighborhood? Is it fighting mice? A robot dog? Other robot cats? Do robot cats even exist? Why do I feel the need to ask questions that will never be answered? Where can I buy a robot cat to scare off the other robot cat? Or will they become robot friends? Do robots make friends? SO MANY QUESTIONS!

– I was going to write a Phantom Song article this weekend. I got the idea last night when a Pearl Jam song came on the radio and I found out that it wasn’t actually by Pearl Jam. But instead of writing it down, I decided that I would remember what it was. Which I don’t. Since then, every Pearl Jam song that I know has been stuck in my head, with the exception of the one that I was trying to remember in the first place, which is not actually by Pearl Jam. My own inventions are working against me. This has been my life so far. I fucking hate Pearl Jam.

– This week’s edition of Ad Nauseous is brought to you by Portlandia:

I’m not going to go into how I feel about the actual show, because that would result in 1000+ words of drivel relating to how they are annoyingly quick at lampooning popular topics, but then do so with little tact or wit. Just look at the ad. How does it make you feel? If you somehow had no idea what the show was about, would this ad tell you any more? It just screams out, “WHAT UP! Two hipsters are in a dimly lit room, dressed in maroon and guess what, THERE’S A FUCKING CHAIR IN THE ROOM! COMEDY! BOOM!” That’s all you get. Instant brand recognition. Now, whenever I see a woman sitting in a chair with a man standing over her, I’m going to instantly think of Portlandia. Even if you did recognize the show and its actors, does it really encourage you to watch the show? If you were already a fan, the ad wouldn’t be necessary at all. Those people aren’t the target. If you watched the show a few times or maybe for a full season and decided that it wasn’t right for you, how would this ad convince you to start watching it again? If anything, it just convinces the onlooker that they had become so full of themselves that they would get away with being amongst a chair and deciding that it was good enough marketing. Or maybe the point is that it’s pointless. Maybe their goal is to piss people off, so some no-name bloggers can complain about it and the readers will tune in Thursdays at 10 or visit ifc.com to see what it is that the bloggers are so pissed off about. I’m now a part of their evil little game, and I’m tired of fighting.

– In breaking news, Skymall has filed for Chapter 11 bankruptcy. All airplane seat pouches will now be filled with telephone book-sized Brookstone catalogs.

– Try this trick over the weekend: Get in an argument with a stranger and demand that it be decided by a coin flip. While the coin is in the air, snatch it and run away with the loot.

Have a flippy weekend, everyone!

← I WISH HEMP SEEDS WERE HUMP SEEDS [WEDNESDAY WHININGS WITH H2K]
A Word From the Creative Director. →