I’d Rather Get A Sham Divorce [Friday Thoughts With TeeCoZee] 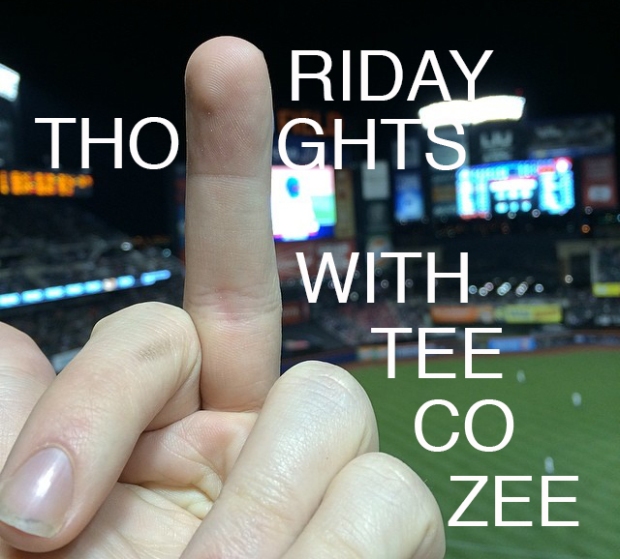 Goomornorino! It’s Friday, January 9, Two Thousand and Fifteen. The weather in Brooklyn is 22˚ with a light snow and somewhere, somebody is stepping out onto his front porch. The nightmare of last night is over. Now, there’s nothing but morning. A new day to make everything better. Just as a smile cracks from his face, a football comes out of nowhere and hits him in the groin. That’s what he gets for being optimistic and living in a neighborhood filled with unruly teenagers. I’m just glad it’s not me. I also have some things on my mind…

– If you’ve ever read any of my pamphlets, readlets, bathroom wall writings or hung out with me while angry in a grocery store, you would know how I feel about food conglomerates. I hate them to death. And even after they die, I still hate them. Don’t get me wrong, I get romantic about the idea of a good ol’ fashioned food conglomerate, but all it does is increase the volume of the company’s output and increases the shittiness of the products they sell. Philadelphia cream cheese is a sham. They’re also the cream cheese authority. Try to name another brand of cream cheese. I dare you. Come on. Friggin wuss, NAME SOME CREAM CHEESE! You can’t! To top it all off, Philadelphia Cream Cheese has nothing to do with the city of Philadelphia. It started in Western NY, by a guy that thought the city of Philadelphia could whip up a mean cream cheese. Way to rep the wrong city, buttbag! Because of this dingus, nobody has been able to properly market authentic Philadelphian cream cheese and if they did, all of their critics will claim that it’s un-authentic because it tastes nothing like Philadelphia, which is deceptively un-authentic. Maybe I’m just really pissed off that I bought the Smoked Salmon Philadelphia Cream Cheese and not only does it taste like ass, I’m also willing to bet that there isn’t any real salmon in it. It’s probably salmon surimi with 6 different dyes to give it that proper orange hue. Probably some dog hair, too, for good measure.

I just did minor research and found that Salmon Cream Cheese SHOULD contain the following ingredients:

Half & half, Mesophilic Starter Culture, Salmon, Onions, Salt to taste

This is what Kraft thinks Philadelphians are doing when they’re making cream cheese:

I kind of love how unsure of itself it is. It could have Xanthan Gum ot Carob Bean Gum. Or maybe there’s both! Who the fuck knows?!? Cream cheese is meant to be untamed! But also, at the same time, tamed by its wild card stabilizers. It also suggests that there are color(s) in it and then later on reveals the presence of Red 40. Was the mention of color(s) foreshadowing, or is the Red 40 just not that involved? Also, how can you naturally inject the flavor of smoke? Did they capture it in a jar, liquify it and store it in a cellar for 15 years? Natural? Yes. Humane? No. Delicious? Oh hell no.

Top 3 Experiences That You Face When Consuming Conglomerated Products:

– I was looking at a jar of peanut butter the other day, because I was bored as hell. Apparently, the peanut butter company was employee-owned. Well, no shit! Have you ever heard of someone that owned a company, but also refused to work for/with that company? Well, maybe you actually have. So let’s flip the coin: If a company is owned by the employees, nothing would get done. I would not trust any products that were made by an employee-owned company. They probably don’t have equal shares, but if they did, the work day would consist entirely of people overthrowing each other, trying to grab the VP throne for one day or one hour or however long they can sit there before the next proletariat throws them under the bus. To me, an employee-owned company looks a lot like a bunch of grownups trying horribly to play King Of The Mountain. How does anything ever get done in an environment like that?!?

– I’ve got to the point in my life where I’m done with experimenting. It’s not that I don’t love sex, drugs and science, but I just know how shit works now.

– I was sitting in the living room the other night, because there’s a couch in it. I heard a slight rustling. Then a slighter rustling. It sounded like a plastic bag. It sounded like my trash can. There was definitely something alive in my trash can. The rustling got heavier and heavier, to the point that it made sense to have a raccoon in there. I was fully expecting a raccoon to be in my apartment. How he got in, I have no fucking clue. Doesn’t matter. I spent 2 hours afraid to even walk into the kitchen and I started a second trash can in my bedroom. No use acknowledging the main trash, anymore. It has critters. Finally I went outside to calm my nerves and the rustling got louder. The raccoon is near. The raccoon is right above me. The raccoon is…a plastic bag stuck in a tree. God damnit…

– Try this trick over the weekend: Fall in love.

Have an easy weekend, everyone!