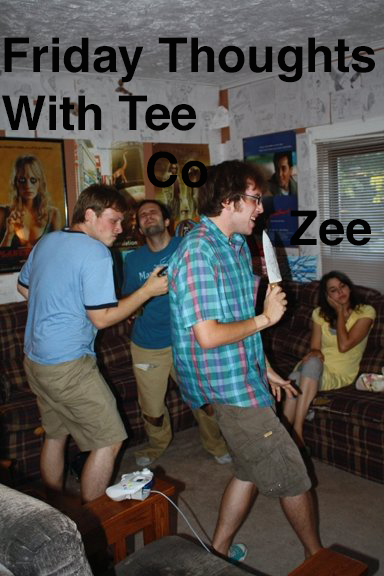 Good afternoon. Yes, it’s still afternoon, even though it’s darker than night. It’s Friday, December 5, Two Thousand and Fourteen. The weather in Brooklyn is 42˚ & gunmetal gray and somewhere, somebody is enjoying some goddamned sunshine, soaking it all in and then realizing that he forgot to do laundry today. But not me, Mayor DeBlasio took the sun away from us and he won’t bring it back until we get segregated subway cars. I also have a few things on my mind.

– I don’t think I’ve ever been more angry at a weather forecast than I have been for the last 2 weeks. Why in the hell does it have to rain every day? It’s not like a single person is befitting from December rain. Nothing is being grown, there’s no harvest at stake. The only thing that’s being harvested is this big black void in all of our souls, as the dreary weather slowly chips away at what we find enjoyable in life and by Christmas, we will all be curled up in our own little balls, cradling our favorite stuffed animals and accusing them for things they have no capacity of doing, like spilling milk or assassinating a senator. And when Springtime comes, it will cease to rain for 200 days and we will have nothing to eat except each other. And senators. Delicious senators.

– This weather has thrown me through an uninspired loop. When I get home from work, I just stare off into space because I can’t figure out how to enjoy myself. I’m so uninspired that I forgot how to relax, let alone think of synonyms for the word “uninspired”. It also doesn’t help that I’m afraid to go to Manhattan, out of fear that some protestors will yell at me for being white and not yelling. Wait, that’s inspiration: I can say some crap that might piss people off! Here we go!

My stance is that all of the uproar and riotry is about 200 years too late. We’ve already accepted and became comfortable with the fact that the US Justice System is a broken, abusive stepfather. Being mad about it now is like being mad at guns for killing people. You just now discovered this? Good job. Go knock over a car.

– With that said, Adnan Syed is probably guilty. But nobody will ever know if he is guilty. But he’s guilty. Or maybe not. Ask me next week.

Actually, no. She committed suicide. Wait, shit, she was probably crushed by a falling cell phone tower. Or maybe she was eaten alive by a phantom payphone?!? DAMN YOU PHANTOM PAYPHONE! DAMN YOU TO HELL!

Or maybe she’s not dead at all? Maybe she changed her name to Sarah Koenig? Or maybe she suffocated from eating too much cotton candy? Spontaneous combustion? Achy Breaky Pelvis? WE WILL NEVER KNOW! I understand that there’s only so many episodes left and due to the fact that we don’t know anything about it already, we can easily assess that this story will go nowhere and 60% of the listeners are going to be wrongfully upset. I love the idea of having a podcast version of A Thin Blue Line, but that’s not something one can manufacture [which is what makes the idea of it so profound]. We’re probably all better off thinking that Adnan did it and we can just accept it, move on and pray that Koenig gets an easier case next season.

– I may be really uninspired today, but it’s my duty to write something. Not so that I can entertain a small mass of people, but because I really want to push the picture of H2K’s bruised ass off the BFD front page. And now that I’ve made my mission statement clear, she will probably buy a pair of dentures for the sole purpose of modeling them inside her vagina and I would basically eat my words. [Note: THIS IS NOT A CHALLENGE! [I don’t think [But if you do, I guess I’ll have to start competing in a fake contest to see who can make the most disgusting picture using only one prop]]]

– I’m going to my first Brooklyn Nets game tonight. This comes off as odd, because I haven’t given a shit about the NBA since Allen Iverson started practicing. But what can I say? I love the general product of Sports™. There is one little thing I’m concerned about, however. It’s how to act. Every sport has the one thing that people go to the match to see. They go as follows:

Is it a dunk? Are they there to see dunks? Or 3 pointers? Free throws? Halftime gymnastics? What is the one event that happens in a basketball game that makes the crowd “go wild”?!? I’m going to pretend to be very confused. It’ll be great.

– I revamped my OKCupid profile, because I’m uninspired. This girl started chatting me up as if I was hot shit. I usually have to beg people to even notice me on that godforsaken website. But she’s also a writer, so naturally, I asked what she wrote. Her response was “I’m actually more of an editor, but when I do write, it’s usually about the environment/animal rights”. I wanted to make some snarky remarks, but I’m too old and uninspired to be mean. Of course I said nothing after that, too afraid to even log back on at risk of me being found out. There’s a reason why I’ve been single all these years…

Try this trick over the weekend: Try to figure out what to get your parents for Christmas. Bet you can’t, can you?!? IT’S A TRICK!

Have a figurative weekend, everyone!