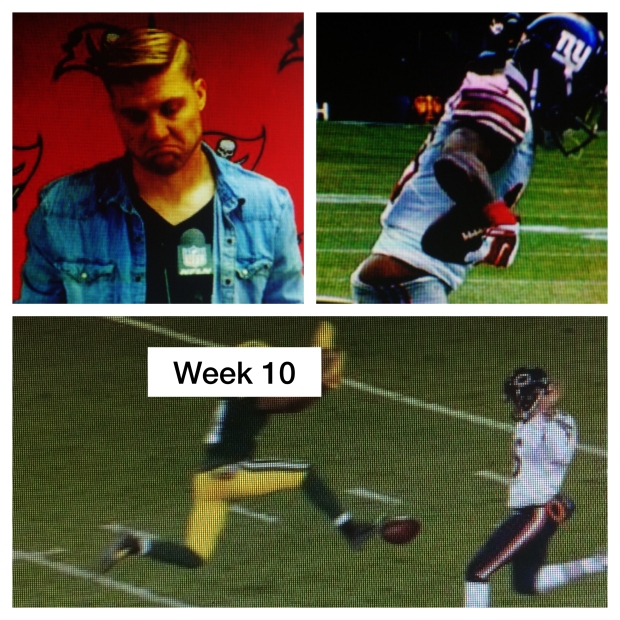 I’m a little weirded out that the season is already halfway over. I’m even moreso weirded out by the ongoing presence of butts in the NFL. This became apparent in the Giants-Seahawks game. In the 2nd quarter, Odell Beckham Jr caught a pass from the Dunkin Donuts mascot and suddenly, his ass was hanging out for the 12th man to see. This horrified me to no end. I realize that football players have mouths, ears, legs and all of the other necessary appendages. But are butts really necessary when playing football? Whoever designed these guys went way too far. It’s not like we see football players eat or sleep, why would they ever need to poop? I hope that in future seasons, we see more carnage and less butts. That’s the only way we can save this sport.

Cleveland Browns 24, Cincinnati Bengals 3
As a firm believer in giving credit where credit’s due, there’s only one possible explanation to what transpired in this game. What started as a casual prank turned into a nightmare when it was taken too seriously. When Andy Dalton sat down to watch game film last week, an unknown jokester or chucklehead replaced the footage with a video of two people having sex [a porno, if you will]. At first, he thought that this was some interlude, but as the butt-play romp continued, Andy came to a realization. What he was seeing on the screen was him. Or at least an incarnation of him. And football is a metaphor for sex. Nay, football IS sex. It’s all about penetration and bubble screens. Andy spent 22 straight hours watching film, basically up until game time. When he marched onto the field, he did so as a new man. He’s now determined to take the true meaning of the sport and be the best footballer that ever lived. But suddenly, he realized that football is nothing like he thought it was. Where’s all the tits, toys and pizza delivery boys? Why are all these people watching him? Why is he wearing so many layers of clothing? This isn’t football at all! So Andy flailed and shook and the world looked on in dismay. Who was once a savior quarterback is now some shmuck that’s trying to rape the mascot. I guess I should’ve also mentioned that Andy Dalton has an ecstasy problem.

Detroit Lions 20, Miami Dolphins 16
I have to admit, what Miami did to the Chargers last week made me downright sad. The last time they were shut out, their quarterback was Jim Buckfucking Harbaugh. It was almost perfect that the Lions would play them the week after, so I can have my own taste of personal revenge. The results were tasty. Lions punter, Sam Martin, was much more successful against the Fin’s D than Philly Rivs. He threw for 27 yards on 2 attempts, unlike Phil, who probably threw 3 shovel passes and clucked like a chicken for 3 hours. And even with the return of Megatron, Golden Tate III is still terrorizing highlight reels and rescuing cats out of trees. Look alive, the Lions are 7-2. This hasn’t happened since 1993, when they were under the vigilant eyes of Wayne Fontes. May those glory days come back again, or else I’m going to have to perform a seance to bring Wayne back from the dead…

San Francisco 49ers 27, New Orleans Saints 24
The main beef I’m having with this season is that you can’t really distinguish the good teams from the average. No matter what the outcome of this game would be, nothing would surprise me at all. On paper, we’re still considering these two playoff contenders, but only when they win a game. When they lose, everyone goes on a 2-day tirade about how they aren’t what they used to be, there’s trouble in the locker room and there’s a dumpster on fire outside. It makes sports writing so much easier when the dynamics are structured this way. Here’s two pre-written headlines for this game:

These teams have the same exact story, they’ll finish the season with the same exact record and play the same exact teams in the playoffs, which is actually themselves, in a bloodbath that doesn’t end until game official, Ed Hochuli, blows the whistle on the game, retires and opens a popcorn stand.

New Jersey Jests 20, Pittsburgh Steelers 13
I found a good Monday morning experiment: Deduce which team lost in the biggest upset on Sunday and listen to that teams Sports Radio station. Man oh man, was it entertaining in Pittsburgh. I mean, first off, those chuckleheads are just awful even if they are winning. Secondly, I discovered that Pittsburgh fans are much akin to New Yorkers. Even when they’re doing good, one bad game will send the fans on a witch hunt. They were going out and calling Big Ben Raper a bum that’s past his prime. Surely, they forgot that that bum who likes to rape women also threw 12 touchdown passes in the span of 2 games. But I get it. The AFC North is really fuggin tough and to lose to the Jets is a travesty of epic proportions. But Steelers fans also have to realize that Andy Dalton is going to kill himself tomorrow, the Ravens are still trying to find pieces that are pick-uppable and the Cleveland Browns are the Cleveland Browns. For a division completely over .500, there sure is a lot of baggage.

5) He thinks the plural of “moose” is “moosier”.
4) He doesn’t love the sight of Odell Beckham Jr’s ass, but he respects it.
3) He has a problem with the word “moose” in general.
2) He always forgets that Circuit City closed down.
1) He has $882 in store credit at Borders that he refuses to throw away.

And now, the rest of the games…

Green Bay Packers 55, Chicago Bears 14
In a heroic act of futility, the Bears allowed 50+ points in two consecutive games. While this might seem like a normal occurrence in football, it’s actually quite the opposite. The last team to be that worthless for consecutive games was the Rochester Jeffersons in 1923. The failed NFL franchise only lasted for 4 seasons, had a record of 0-21, and was shut out in 16 of those games.

Baltimore Ravens 21, Tennessee Titans 7
You’re telling me the Titans are still a team? And who’s their quarterback? Zach Mettenberger? Wow, that was a wild guess. Didn’t he play for the Dayton Triangles?

Kansas City Chiefs 17, Buffalo Bills 13
Expert cocksucker, Knile “Sugartits” Davis, proceeded to do nothing for me in this game. He scored me -3 points. What kind of asshole does that?!?!? Such a Phillip Rivers move.

Atlanta Falcons 27, Tampa Bay Buccaneers 17
I’m telling you, if the Buccaneers move to London, everything would be perfect. They’d be tucked into a different country and we can all just laugh about it and forget that they existed in the first place. It’s the only way we’ll save America.

Dallas Cowboys 31, Jacksonville Jaguars 17
I’m telling you, if the Jaguars move to London, everything would be perfect. They’d be tucked into a different country, play against the Bucs and we can all just laugh about it and forget that they existed in the first place. It’s the only way we’ll save America.

Denver Broncos 41, Oakland Raiders 17
I don’t understand why the Raiders are still winless this season. It’s not due to lack of trying. That one guy that throws the balls actually went to college for throwing balls. And the guy that runs with the ball? He gets paid a living to run with balls. It’s talent that the Raiders are lacking, not trying.

Arizona Cardinals 31, St Louis Rams 14
The Rams have the MO this season of being the team that gets close when playing against good teams. Only this time, Douggie Stanton had some things to say about it and blew the game wide open. Who needs Carson Palmer when you got Douggie?

Philadelphia Eagles 34, Carolina Panthers 33.9
In what ended up being the “Slobberknocker Of The Day™”, both teams struggled in a defensive struggle, where even struggle struggled. At the end of the first OT, Cam Newton took a knee because he forgot that there was tying in football. Out of annoyance of this occurring, a new rule went into effect that takes away .1 points from the offending team. God, what a shitty finis

Join me next week when Chip Kelly finds out there’s no tying in football, Randy Moss comes out of retirement and Adrian Peterson eats at Burger King!