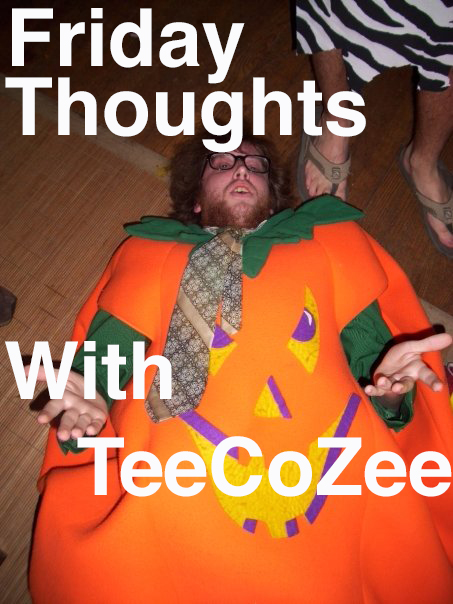 Good afternoon, or whatever the hell you call it these days. It’s Friday, October 31, Two Thousand and Fourteen. The weather in Brooklyn is 51˚ & overcast and somewhere, somebody is discovering the true meaning of “trick” in “Trick or Treat”. First off, he was perplexed that kids were showing up at his doorstep so early, considering there’s school and everything. Now, they’re shooting fire out of their mouths. As his whole world goes up in flames, he still has the resilience to take pity on the younger generations, as they know not what they do. But not me, I stay the fuck away from Dragon Teens. I also have a few things on my mind.

This year, I’m going to dress as Tiberius Coze for Halloween. Tiberius Coze is basically me, except he carries a gun and gets laid all the time. Now that I think of it, I’m missing two integral pieces of my costume. Fuck it. I’ll just shave off my beard and be Tim Lincecum.

I’ve never been a huge fan of Halloween. Regardless of the fact that Paul Rudd is a stud in Halloween 6.

Wait, it’s the other way around. I love the Halloween movies, I hate Halloween the Holiday and I think Paul Rudd has Pretty Boy Rugged Appeal. I don’t even know where to begin.

Top 5 Things I Hate About Halloween

5) It’s no fun when you’re not a crafty person
I was able to somewhat get away with Halloween when I was a kid and it was cool to have a store-bought costume. Back then, if your Mom made it, you would be laughed at. Then as you get older, more importance lies on the craft and wit of your costume. One year, I had a ridiculous beard, so Roscoe threw some black shit on my face, I put on a leather jacket and used masking tape to make a number 3 on a T-Shirt. Nobody understood nor cared that I was trying to be Teen Wolf 3. People were much more into the guy that dressed as Steve Zissou or a MySpace Profile Page. I’ve never been able to come up with good costume ideas. Usually, I have to explain what I’m trying to be. Let’s do a photo comparison: 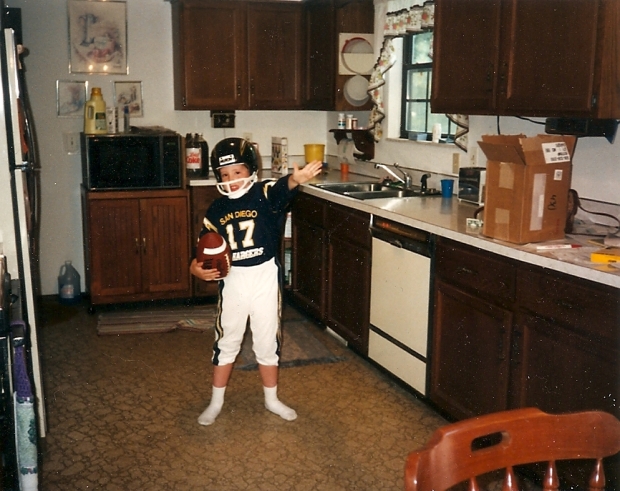 This is me as a kid, and because it was ordered out of a JC Penny catalog, everyone understood/thought it was cool that I was trying to be a backup QB for the Chargers.

And then we have this:

Last year, only 10% of the people I interacted with understood that I was trying like hell to be Ned Flanders. I used as many Flanders-isms that I could muster, even changed my name in the cash register to Ned Flanders and people still didn’t get the joke. At that point, I decided to give up on Halloween altogether.

4) Candy sucks
There. I said it. I fucking hate candy. The idea of having a whole bag of candy makes my stomach churn [and this is coming from a guy that just ate at Subway. SUBWAY!]. I can’t believe I used to eat that stuff for breakfast, for days and days after Halloween. I think about those times with anguish and regret, because now I hardly ever have the gumption to buy a bag of Haribo Gummies or Skittles. It’s something I crave once every 6 months and it never occurs in October.

3) Everybody’s suddenly in the mood to watch horror movies
As a kid, this was a huge problem for me. As an adult, it’s a much different problem, but still a problem. I used to be afraid of every startling image that could be conjured onto a screen. The month of October was a time of paralyzing fear, as I’d be afraid to turn on the TV because I knew that something scary was surely on. I couldn’t even watch my regular sitcoms because I knew there’d be advertisements for scary shit during the breaks. I would use the TV Guide as my map, as I marked off possible land mines in the battlefield. It got to a point where I’d try to delete channels for a period of time and leave notes on the TV instructing to not flip over certain channels at certain times. And whenever November 1 came around, a sweet wave of relief would rush over me and I knew my fears would be over for 11 months. But then I would remember the VHS tape with all the Christmas shows on it and the certain terrifying moment inside of it and I would be back to my ol’ paranoid self.

Now that I’m no longer a complete bitch, it annoys me that everybody’s trying to watch horror movies in October. They’re accessible all year long, people! Somebody would be like, “You wanna watch Nightmare On Elm St 4?” and I’d be like, “Hell naw, I watched that a few months ago. I’m good”. Then they’d suggest Ernest Scared Stupid and I’d kick em out of my house. I love horror movies, but I hate feeling obligated to watch them.

2) Out of any other holiday, Halloween is the biggest waste of money
Many would argue that Christmas is a waste, because you’re buying people shit that they don’t need/want. I would beg to differ. With every gift, there’s a chance of practicality. They might use it down the road, or return it for something more useful. Nobody ever re-uses the things bought for Halloween. And in order to have a creative costume, you’re bound to drop 50-100 bucks easily for something you’re never going to wear again. And when you do spend all that time, money and effort, you’re going to roll into a Halloween party and find out that somebody had the same idea as you, but they did it much better. Suddenly, all that money you spent was for nothing, except for maybe dark memories. Not to mention decorations, if you’re hosting a Halloween party. At least with Christmas, the decorations can be reused and easily stores. With Halloween, all of the decorations are either disposable or perishable. That’s another hundred bucks that goes down the drain.

1) It offers everyone a free pass to act/dress like a complete idiot
Some people may view this as a good thing and hell, I should as well. The demographic of people I meet on Halloween range from annoying, unpleasant to downright dangerous. First off, this may shock and alarm you, but I REALLY FUCKING HATE SEXY COSTUMES. I think that it’s an indecent and tasteless cry for attention and now in this Post-Neo-Feminist world, any attention drawn toward them is immediately thrown back with anger and resentment. I’ve been hearing a lot of bullshit about women feeling uncomfortable for the harassment they get while wearing a sexy schoolgirl/cat/nun/toaster costume. I get it, it’s cool. Women don’t like catcalls, and quite frankly, I defend their arguments. So if you don’t want people to harass you, it’s very obvious that you SHOULD NOT DRESS UP AS A SEXY TOASTER! I’m probably missing something here, but I feel like the only idea/benefit behind wearing a sexy costume is to draw male attention. It’s not like it’s comfortable or even practical to be wearing skimpy clothes in 40˚ weather. The same argument goes toward people that go to the club. Don’t like men hitting on you at the club? Then don’t go to the fucking club! That is the point of the club! WHY ARE YOU GOING TO THE CLUB DRESSED UP AS A SEXY TOASTER?!?

And then, there’s the guys. Oh, the fucking guys. They think that because it’s Halloween, it’s okay to act as if the world is ending. It’s not a free pass to scream at people for no reason, destroy property and generally act like a complete douche bag. I fear people on Halloween, for the sole fact that they do not give two shits about the consequences of any of their actions. Add that to the fact that gang initiations are going on, I’m late for work and accidentally dressed in all reds, even though I live in a Crip neighborhood and you can see that I’m kinda screwed.

I may be screwed, but at least I’m going to dodge Halloween altogether. I’m going to be working until 1am doing inventory, then I’m going to take a cab straight home, so that I can maximally avoid all of the unnecessary trouble that comes with Halloween in the city. I might treat myself to a Rouge Dead Guy Ale, because there’s a skeleton on the label and whatever, BOO. Scary skeleton. I’d much rather celebrate daylight savings time tomorrow night. There’s an extra hour of partying to be had. Now THAT’S a really reason to celebrate!

Besides, when you dress like me, every day is Halloween.

Try this trick over the weekend: Treat.

Have a treaty weekend, everybody!