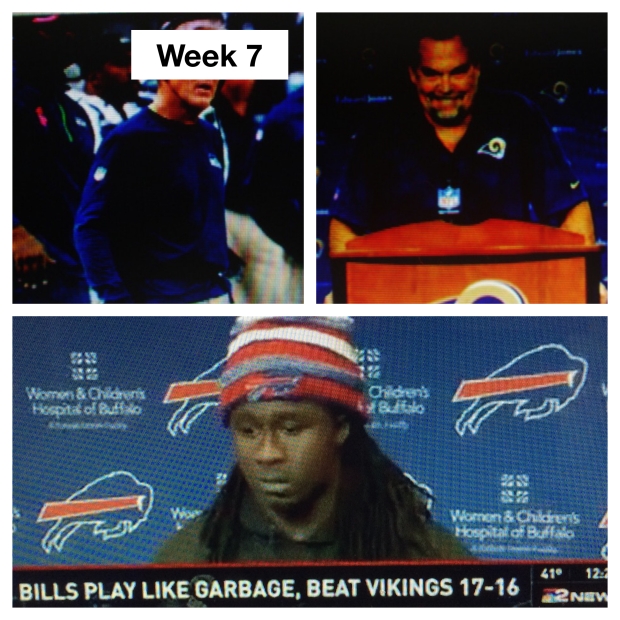 Now that we’re nearing mid-season, I’m finding it easier and easier to focus on football. I owe all of this to the fact that I’m not watching much live action. I’ll catch the last half of the 3 primetime games and that’s it. Everything else is watched in condensed portions on Monday/Tuesday afternoons. I feel like this is a better way to ingest the sport, as you can focus on one game at a time. In seasons prior, my consumption would involve me being comatose on the couch for 12 straight hours and half the time, I wouldn’t even remember what I just saw. This season, I feel a lot more focused, clear-headed and left out every Sunday. Live football watchers can kiss my ass. I wish I was one of you!

St Louis Rams 28, Seattle Seahawks 26
Holy fucklogs! Jeff Fisher touched the hearts and minds of football fans, took them out to dinner, let them pick whatever they wanted off the menu [dessert and all that shit], slipped some stuff inside their drinks and made sweet love to them all night long, leaving them to awake in a cold sweat, wondering what in the hell just happened and what it all means. The sport of football has just been Mind-Date-Raped. He even gave them mustache rides, whatever the hell that means. But how can we accuse him of this? Allow me to gather the evidence.

You could watch this surveillance video 50 times and without explanation, you would have no clue what in the hell just happened. This is the special teams trick play from hell. Jeff spent an inordinate amount of time studying the Seahawks punter and deduced that he kicks to the right almost every time. So, they placed themselves in the formation to receive a kick from the left and somehow, SOMEHOW, the Seahawks took the bait. Nothing special was done to manipulate the ball, they just convinced the other team that up was down by following the same logic themselves.

You might think that this fake punt was no big deal, just well-executed. But you have to look at the circumstances. They were up by 2, with 3 minutes left and they were near their own 20 yard line. A failed conversion would be complete suicide and Fisher would be chastised for making one of the dumbest play-calls in NFL history. Because it was such a stupid idea, the Seahawks didn’t expect it at all. The same un-logic goes for the punt return: If the Seahawks didn’t follow the Ram’s lead, they would’ve left the returner alone to fend for himself and would’ve looked like complete fucktards.

To put it in simple terms, Jeff Fisher defeated the Super Bowl champs by acting so dumb that nobody would expect something so dumb to happen, so therefore, it’s brilliant. With a squad as fucked as the Rams, I’m sure they spent all of the offseason prepping for this one game. Now that these cats are out of the bag, there’s no possible way they can win another game by relying on cunning stupidity and recklessness. But in the end, the Rams deserve a round of applause. Their season might already be over, but they gave us one of the strangest performances in NFL history and it’s one that we will never forget. No matter how hard we try to block it out.

Detroit Lions 24, New Orleans Saints 23
Is there anything that Golden Tate can’t do? Turns out, there’s a few things:

That’s about it. Come on, his name is Golden Fucking Tate. Before he was born, he beat God at a game of Cee-Lo. And God loves Cee-Lo! Why do you think he invented it? In any event, getting 10 catches for 154 yards not only proves that the Lions can win games without Calvin Johnson, but also, they can make off-season transactions that actually end up benefitting the team, which is nothing short of a miracle. In speaking of miracle, Matt Prater didn’t miss any attempts. That’s all well and good, but considering his track record combined with those of the Lions, he’ll end up getting drunk and crashing his car through a Metro PCS store in 36 hours time. And the hunt for a new kicker will continue…

Dallas Cowboys 31, Port Authority Giants 21
Jerry Jones has finally reclaimed his masterpiece. And if I sound like a repetitive asshole, it’s because I mean to. The blueprint of the 2014 Cowboys is identical to the blueprint of the 90’s. Tony Romo is the perfect Troy Aikman. Attractive and tough, the rugged pretty boy. He doesn’t have the talent of an elite quarterback, in fact some times he looks downright terrible. What he does have is perseverance and a whole lot of luck. Troy Aikman wouldn’t be shit if it wasn’t for his supporting cast. Like it or not, you can say the same about Romo. Then you have Dez Bryant, who is Michael Irvin 2.0. Tall, fast, talented and outspoken. Even if he’s not the best player out there, he’s more than happy to take all of the credit. He has no problem with out-shadowing the raw talent of Jason Witten, just like Alvin Harper had to live in the shadows of Irvin. Obvious cocaine problem. Et cetera, ad nauseum. And duh, DeMarco Murray = Emmitt Smith. That’s just plain obvious. The madman can’t be stopped. I give the Giants a lot of credit for holding him to only 128 rushing yards. Because that’s a pretty weak stat for him. And yeah, their defense is killing it. We’ve seen many years where the Cowboys have been better than the average team, but this is the first time in decades that they look “amazing”. This comes at a very unfortunate time for the Eagles, as their team also looks promising. This will be the first time ever that there’s a race in the NFC East and I actually like the teams involved. Also,

1) His favorite word is “cool”.
2) He was Fonzie for Halloween…thrice…
3) He thinks Canadians are inherently dumb
4) He first colored inside the lines in the 4th grade
5) He thinks the new U2 album is garbage

Washington Skins 19, Tennessee Titans 17
Oh shit, who is that over there? 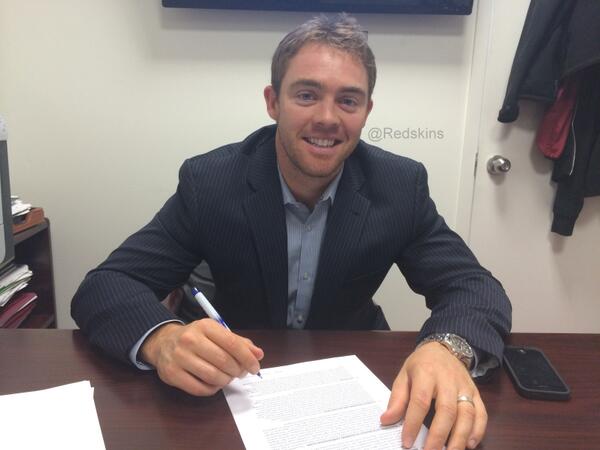 Can I have your autograph, Colt McCoy?

Thanks, Colt McCoy! Want a bite of my pizza?

Okay, I get it. You’re not impressed. Well fuck you, Colt McCoy! You think you’re hot shit just because the Skins were dumb and desperate enough to use you as a QB3. You aint shit, Colt McCoy!

Wait, what are you scheming Colt McCoy?

Damn you, Colt McCoy! Damn you to hell!

Kansas City Chiefs 23, San Diego Chargers 20
The Chiefs are sticking around like poop on a hemorrhoid or the rotten fish smell from my neighbors house. We’ve seen enough this year to deduce that they’re not actually contenders, unless last year gets duplicated and the 2 wild cards come out of the AFC West. Considering what’s going on in the North, it’s unlikely. The Chiefs now serve the role of the spoiler team. We know they’re not good enough to hold their own or even maybe have a winning record, but they can show up on any given Sunday and give the other team hell. They did just that with the Patriots and they did it again in San Diego. It wasn’t pretty, but they scrapped together a win. Also, Philly Rivs was getting no love from anybody. These things tend to happen. In 2 days, the Bolts have to face off against CyboManning and his legion of Lawnmower Men. The internet will never be the same.

And then there were the rest of the games…

Arizona Cardinals 24, Oakland Raiders 13
In case you didn’t notice, the Cards are 5-1 now. Also, the Raiders are winless. Both of these things went under the radar because nobody cares and it has no effect on us. Meh. C’est la guerre.

New England Patriots 27. New Jersey Jets 25
I’m starting to understand what’s going on here. It turns out that Tom Brady is a reverse-werewolf. Or maybe he’s just a werewolf. Regardless, after the sun goes down, he loses all of his ability to keep composure, take dumps or do anything at all. Or maybe that means nocturnal? Fuck science.

Green Bay Packers 38, Carolina Panthers 17
The NFC South has become a sore spot in the NFL. What once was a highly contested division is now lead by the bumbling Panthers, who own a 3-3-1 record. What the hell happened to the death-defying Saints and the dirty-assed Falcons? They’re not even trying anymore. Just limp into the playoffs and go home.

Buffalo Bills 17, Minnesota Vikings 16
“Bills Play Like Garbage, Beat Vikings 17-16” – The most brilliant headline ever, written by some hard nosed forlorn Buffalo beat reporter that owes bookies $50,000 after already getting his digits chopped off.

Indianapolis Colts 27, Cincinnati Bengals 0
I understand that AJ Green is injured, but that’s no excuse at all to be shut out by the Colts. Who the fuck was playing? Bon Jovi?

Jacksonville Jaguars 26, Cleveland Browns 6
We shall see many more in the future, but this was the first dark day for the Bryan Hoyer Truthers. We can only hope this is a hiccup in their 8-6-2 season.

Baltimore Ravens 29, Atlanta Falcons 7
In the battle between birds to see which one is dirtier, the Ravens came out on top, proving to be dirtier than the dirty birds. Or are they cleaner? Does dirty=good or bad? I hate birds.

Denver Broncos 42, San Francisco 49ers 17
I could care less about Gary Payton breaking the NFL touchdown record. Actually, I do care, but that’s not the issue at hand. What I’m more excited about is the return of Blaine Gabbert. Sporting a sexy and sporty new haircut, Blaine came off the bench in the 4th quarter to throw a touchdown pass. BLAINE GABBERT GOT A TOUCHDOWN! WE LANDED ON THE MOON! USA! USA! USA! USA!

Join me next week when I hate the Steelers more, Colt McCoy gets a Slurpee named after him and ACTION ACTION ACTION!