Good afternoon! What, did you just wake up? Well, I’m not going to say Good Morning to you, no matter how late you stayed up watching reruns of Cheers. It’s Friday, October 10, Two Thousand and Fourteen. The weather in Brooklyn is 61˚ & overcast and somewhere, somebody is leaving work early to go on a country drive/foliage tour. After all, nothing says Autumn like watching dying leaves and trying to associate them with your dying lust for life. And me? I aint had no loving since January, February, June and July. I also have a few things on my mind…

– I’d like to get down to brass tacks. I’ve been up at aluminum tacks for far too long.

– Technology is creepy. I was playing a song embedded on a web page from Spotify, then zoned out and started doing something else. About 30 minutes later, I realized that I was listening to a whole album, but the webpage was closed out a long time ago. At some point, unbeknownst to me, the Spotify app launched as I left the webpage and without missing a beat, seamlessly switched technologies to resume the album. You would think we would have a say in these kinds of life choices our computer machines are making, but we don’t. I feel violated. I’m paying a company $8 per month to mentally rape me and play Genesis songs on demand. Worth it.

– In speaking of technology subscription services and not having control over life choices, I was dumb enough to enlist in the free trial of Amazon Prime. This is probably a subject that comedians have poked apart ad nauseum, but I didn’t think my personal experience would be so typical. At first I thought to myself that I would need to buy 2 products from Amazon per month in order for it to pay for itself. 3 hours later, I realized I should be buying fucking EVERYTHING from Amazon! Deodorant? Check. New book? Check. Wait, I’m running low on toothpaste…

I just bought toothpaste on Amazon! I could’ve just walked 4 blocks to Walgreens and bought toothpaste, but instead it’s going to be delivered to me on Monday [Fuck Columbus Day, my postman keeps it real]. I knew I was in trouble when I woke up the other morning and bought ice sphere molds. Ice Sphere Molds. Things that you fill with water and it makes an ice sphere instead of an ice cube. I spent money on ice balls. What in the hell is wrong me? Why would I ever want that?!? What am I gonna do, throw them at my neighbors? Pretend to be fancy while drinking cheap bourbon? Make an ice sculpture of Vectorman? I like ice. Why didn’t I leave it the fuck alone?!? Without batting an eye, I spent $4 on something I may never use and yet, I still get pissed off every time I have to pay more than $4 for a meal. Let this be a lesson: You may not want something and you definitely don’t need it. But free two-day shipping will turn your common sense upside-down and steal its lunch money.

– My hair is getting too long. A colleague offered to style it into cornrows. I almost took her up on the offer, until I remembered the last time I knew a white guy that got cornrows. I accidentally gave him a black eye and he looked like a small-time criminal that failed gang initiation. I don’t feel like getting a black eye.

Top 5 Things I’m Going To Buy When I Get Rich:

– I have a very weird relationship with Chinese Food, but not the kind where I can only make love to her under fluorescent lights and she has to pay all of my psychiatrist bills. This is probably a Bed-Stuy thing, but every time I buy Chinese, there’s one piece of meat inside the dish that cranks the emergency shut-off valve in my appetite. Not that the piece of meat is in any way disgusting, but there’s a certain air to it’s aura that can only be described as “not right”. Just slightly off. And then the idea of finishing your meal is ludicrous. The ultimate goal is to get through the entire dish while dodging the bad piece. Much like playing Minesweeper. Ignore all suspect-looking pieces, close your eyes and hope it’s all delicious. On second thought, normal/healthy people shouldn’t have problems like this. So why am I having these problems?

– This week’s edition of Ad Nauseous is brought to you by Citibank: 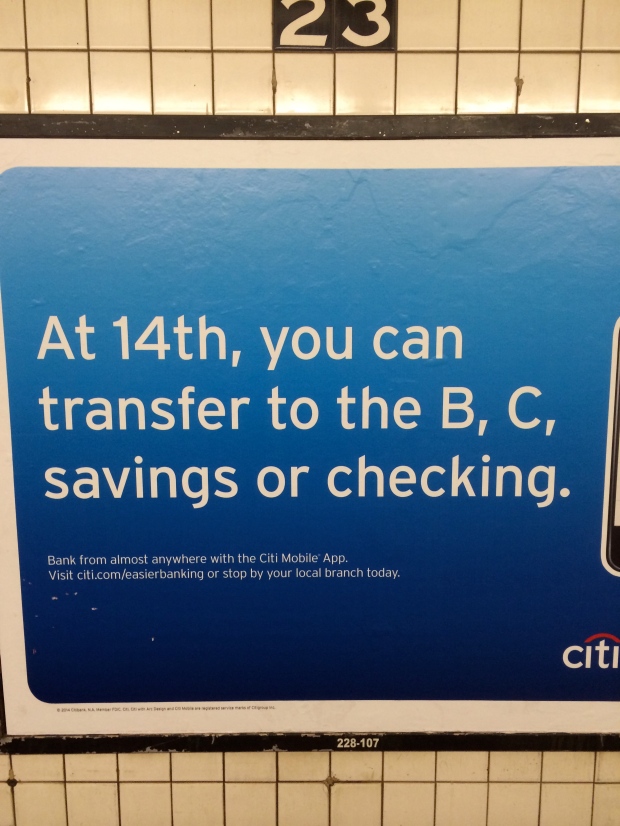 I get it, Citibank is trying to be Train Savvy. But any real New Yorker would not be fooled. I’m going to make an obvious statement and go forward from there.

The B and C do not connect at 14th St, nor does the B even stop there.

Whoever edited this ad later got fired for snorting pop rocks off the janitor’s ass while whispering classified information into his ear. If the trains were to remain the same, there are 12 different possibilities that would result in a true statement [W 4th, 59th, 72nd, 81st, 86th, 96th, 103rd, 110th, 116th, 125th, 135th and 145th]. I can get behind the fact that this ad was on the downtown platform at 23rd st, so logically, they would say 14th st. But if they’re going to change the name of the station, they might as well change the connections [1, 2, 3, L, PATH, THERE ARE OPTIONS!] so they don’t look like complete idiots. Also, this false information could get people in some trouble. Somebody might see that, get off at 14th St and wait forever for a B train that will never come. Poor bastard just needs to get to Brighton Beach! Why is CitiBank trying to mess with his navigation?!? Also, but more dumbly, this ad insinuates that you can physically transfer money to trains and vice versa. Think this train needs more money? Transfer some funds from your savings account to help a poor C train in need! Trying to rob the money train? Get away with it scott-free by doing an instant transfer to your checking account! Why is CitiBank trying to make up concepts that don’t exist?

– You know you’re obsessed with your job when you willingly download software so that you can do work from home.

Try this trick over the weekend: Go on a crowded bus or train and try to read an oversized Magic Eye book.

Have a sailboating weekend, everyone!

← I WISH MY FARTS WERE LOUDER [WEDNESDAY WHININGS WITH H2K]
Joique Bell Thanks God, Curses Us All [TeeCoZee’s NFL Roundup 2014 Week 6] →