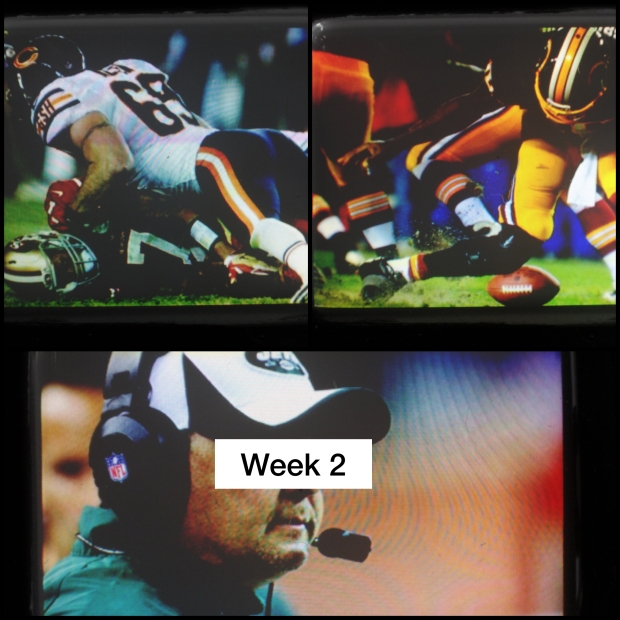 I’m not here to stir the pot or pee in the proverbial gas tank. I have no intention to cheaply sensationalize news stories and disguise it as sports analysis. We all know what happened to Adrian Peterson this week and have our own opinions on the matter. Those who aren’t talking about AP are still talking about Ray Rice. I’m not here to discuss their personal lives in attempt to grasp readership from the common layman [because if there’s one thing the last 2 weeks have done, it’s spark sincere interest and passion out of lifetime football haters]. I won’t even discuss the fate of Roger Goodell and the fallout that will ensue from it. No. Instead, I’m going to talk about what’s really important: Football, poop jokes and made up lies about Eli Manning. That’s all you should ever expect from me.

Cleveland Browns 26, New Orleans Saints 24
Everyone and their invisible friend, Moe, went apeshit when Drew Brees surpassed John Elway to get the 4th most passing yards of all-time. It’s just too bad that this momentous occasion happened on a day that he’d rather forget. Now, we all know the Saint’s charade: go winless for a little while and then start winning games as if they just now found their groove back/missing good luck charm. The problem is that the formula may still work, but the team is getting old. It’s been 5 years since their Super Bowl reign, and 5 of their key players from that team are still active. Without thinking, we can assume that this is good, but between Drew Brees, his RBs and receivers, their average age is 28. New blood has to be acquired and it needs to happen sooner rather than later. Even at 35, Drew Brees is still Drew Brees, but I would feel a little more relived for the franchise at large if they can just have this bad season so that house can be cleaned out. Also, their defense is playing like Bountygate® was a current event. Brian Hoyer completed more 10 yard passes than the Doggpound has food stamps. That’s exactly how the Browns won this game. Even though Hoyer passed 24/40, those 16 misses were on the account of bad location/catching. It had nothing to do with the Saint’s secondary, as it was non-existent.

I will give the Saints one thing, though. In some fleeting moments, Mark Ingram looked a hell of a lot like Barry Sanders. There was a certain twinkle about how he juked, jived and found holes. But he did it with such speed and carelessness that he looked more like Dennis Hopper trying to play The Joker. At least he was considered?

Washington Skins 41, Jacksonville Jaguars 10
What year is it?

IT’S THE YEAR OF KIRK CUUUUUUUUZZZZZZZIIIIINNNNNZZZZZZZZ!!!!!

IT’S THE YEAR OF KIRK COUSINS!

WE LOVE YOU, KIRK COUSINS!

San Diego Chargers 30, Seattle Seahawks 21
Humminah-huh? Did this actually happen? I watched it twice, trying to figure out where the moment was that the upset happened, but the fact is that it wasn’t an upset. The Chargers played like the better team. Not only did they figure out how to stop Marshawn Lynch, but they also figured out how to keep their offense on the field. They scored points on their opening drive. The Seahawks haven’t allowed that to happen in almost 2 years. 2 YEARS. You can tell that they’ve been studying them all offseason, and awesome, it paid off. But it still doesn’t say very much at all about how this season will go for either of them. As Phillip Rivers tries to re-invent himself as a short-yardage QB, Russell Wilson is trying to figure out how he won games in the first place.

Chicago Bears 28, San Francisco 49ers 20
Colin Kaepernick better watch his fucking mouth, that piece of shit threw another fucking interception at a pivitol point in the cocksucking game, and this motherfucker goes out and starts cursing those fucktards out, as if he was hot fucking shit big fucker on campus piece of dong and the dumbfuck ref threw a goddamned flag on his bitch ass for shooting his fucking mouth off, which for some fucking reason is a 15 yard penalty and what does the motherfucking cocksmoker do after that, except get the fucking ball back and throw it straight into the titty-grabbing hands of Kyle Fuller and essentially lost the fucking game because he didn’t know how to keep his fuckin trap shut, the piece of shit dong licker he can lick my balls.

5) He prefers Fresca
4) His first car was a Neon
3) He eats candy bars with a knife and fork
2) He still listens to All-4-One every now and then
1) He’s still convinced that he has vertigo, when really he’s just afraid of heights

The man is an anomaly in the NFL. He’s listed as a running back, but hardly ever takes a hand-off. Chip Kelly has found a perfect way to utilize him; with a sly shovel pass and ample blocking so that he can break 20+ yard gains. Not to say this didn’t happen while he was in New Orleans, because it did. I’m just happy to see Darren doing what he does best and adding depth to the Eagle’s offense that nobody else in the league can provide. Even in the second week, I can say that with conviction. This isn’t his first rodeo. He has been doing the same thing for the last 6 years and defenses aren’t even close to figuring him out. I’m fully expecting the Eagles to dominate the NFC East and I’m sure a lot of people agree, no matter how much we hate them.

And now, here’s the rest of the games:

Baltimore Ravens 26, Pittsburgh Steelers 6
I watched half of this one because there was no good baseball games on. Thursday night’s a great night for football, until you find out that Johnny Mnemonic is on Netflix.

Buffalo Bills 29, Miami Dolphins 10
The 12th man is well and alive in Ralph Wilson Stadium. The crowd was so loud that I couldn’t even hear the broadcasters. Then I realized that this was a tactic by the networks to feign home field advantage.

Carolina Panthers 24, Detroit Lions 7
I didn’t even have the heart to watch the replay of this. Alls that I know is that when the Lions score less than 10 points, the game was really boring.

Cincinnati Bengals 24, Atlanta Falcons 10
Who dey? Or is it who dat? Who dey/dat thought dey gonna beat dem Bengals? Where do they come from? The Jungle? Cincinnati? Is anybody even listening to us? Fuck it, let’s go get some chili.

New England Patriots 30, Minnesota Vikings 7
Somehow, Matt Cassel out-threw Tom Brady by 53 yards. If I had the time, I would go back and find out if Tom Brady threw less than 150 yards before. But I’m obviously too busy for that.

St Louis Rams 19, Tampa Bay Buccaneers 17
Mike Evans got hurt with 11 seconds left but it wasn’t acknowledged for 2 seconds, preventing a game-winning field goal. Technically, the Bucs were owed an extra second, but nobody cared because the game was meaningless.

Denver Broncos 24, Kansas City Chiefs 17
“We haven’t been tapping into new areas of the brain – we’ve been awakening the most ancient. It’s a route to powers that conjurers and alchemists used centuries ago. Humans lost that knowledge and now I’m reclaiming it through virtual reality.” -Cybomanning

Houston Texans 30, Oakland Raiders 14
I made a mistake. David Carr is not the quarterback for the Raiders. Instead, it’s his little brother, Derek Carr. Regardless, we can still carry on with our lives knowing that the Raiders quarterback might as well be David Carr. Thanks for your patience.

Join me next week, when I try to explain why DeMarco Murray shouldn’t be banned for life, just because he has a habit of robbing Red Robin restaurants at gunpoint.