I’d Rather Do Controlled Substances [Friday Thoughts With TeeCoZee] 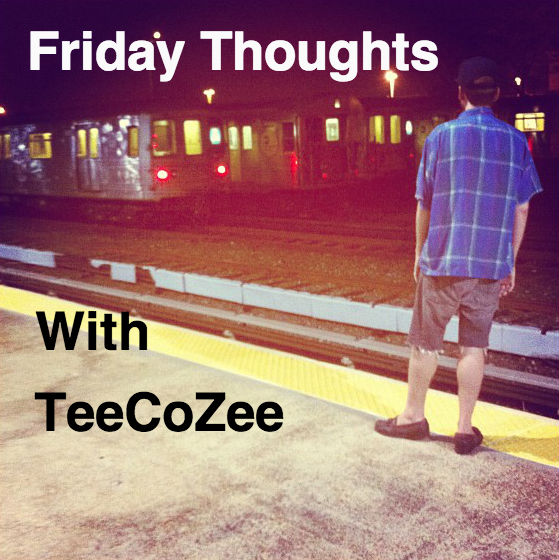 Good morning, even though it’s not actually morning to half of the people of the world. Time zones have a way of making us self-centered. It’s Friday, September 12, Two Thousand and Fourteen. The weather in Brooklyn is 66˚ & sunny and somewhere, somebody is walking through a field for the first time, wondering why he/she’s never walked through a field before, as it is such a relaxing experience, until suddenly, it all goes awry when a twig gashes the ankle, rendering said person injured with minor bleeding. We all have to learn lessons the hard way. Except me. I avoid twigs at all costs. I also have a few things on my mind.

– I feel like half of my readership missed me in my month-long absence, while the other half are still sick of me. In regards to the latter, I did all of this for you, because you’re too dumb to realize that this is a blog and you can ignore it. You are able to change your homepage, and no, I wasn’t writing the same article every day, that was just the newest thing out there. Also, give me some money. You think the internet is free, chump? I’ll rip them bitcoins out of your pockets faster than you can say “Don’t taze me, bro”. Capeesh?

– Apparently, “Capeesh” isn’t considered a word? The mobsters were very successful in working over Webster, but I guess they don’t have as much pull as they used to.

– I went to The Doughnut Connection today because I saw a cup in my trashcan and I always do what my trashcan suggests. I bought 2 doughnuts in hopes of making some sort of connection, but instead, I got home and still just had 2 celibate doughnuts. I tried mashing them together, developing warmup questions, toying with the thermostat, offers of romantic getaways, nothing worked. These doughnuts were not genetically engineered to do well on late night dating game shows. So I figured that they might as well be eaten, so their existence wouldn’t be void of purpose. I took one bite and remembered that I hate doughnuts. So now they’re in the trashcan, having a threesome with a coffee cup. Breakfast is dumb.

– Whenever I hear a depressing 90’s love/country song, I always look back to my childhood fantasy of being a scumbag, leaving my wife and kids behind for no reason. I don’t know why I ever imagined that, I just figured that was the lowliest thing someone could do that would warrant a gloomy Top 40 hit. I also had separate daydreams of owning a dive bar. I learned very early on how to set the bar low…

– Substances are badass, especially controlled ones. Because sometimes you just have to take charge of your own life.

– I was sitting on a stoop the other day. Thinking I was alone, I farted something fierce. Not 5 seconds later, a girl walked up and asked me for a cigarette. As I pulled out my pack, the wind picked up and she immediately declined, claiming she only smokes menthols. What a shame. If I didn’t pass gas, I could’ve saved her from a lifetime of smoking fiberglass. Or maybe she just decided to quit smoking altogether. Yeah, that’s probably it. I’m actually a hero. And my butt is a hoagie.

– I spent the last month or so convinced that I had mouth cancer. I didn’t want to say it out loud very much, but whenever I did, I made sure it was a tender and serious moment. When that moment ended and the person convinced me that I probably don’t have cancer, I would be briefly convinced that I needed a root canal. Or some days, I would need 3 root canals. Then I would veer back to cancer. This charade went on for a very long time and consumed a good portion of my concentration. I was unable to have a good time, as there were muscle twinges in my face that constantly reminded me that I had cancer or AIDs or something worse that’s yet to be discovered. The whole situation perplexed me, as there was something clearly wrong with different, yet connected, parts of my face, but there was no physical signs of infection or injury or anything at all. But cancer is the silent killer and it kept me up at all hours of the night. I finally got into a dentist, I told him my symptoms and how I think I probably needed a root canal. Dollar signs lit up in his eyes, but to his unadulterated dismay, there was no sign that a root canal was needed. Instead, I have 4 cavities, anxiety, hypochondria and a jaw disorder that was brought upon by the previous conditions. Yeah, that makes sense.

– Last night, I overhead a co=worker saying, “I’m only gonna have one drink, I gotta take the train home”. I immediately butted into the conversation with perplexed stuttering. To analyze, here’s some example sentences that make sense:

I would even accept “I’m only gonna have one drink, I gotta ride the bus home.” Unless you are planning on getting blotto and browned the fugg out, there is no problem with being intoxicated on the train. Everybody does it! In fact, some people even drink on the train! The train is basically the #1 perk of being an alcoholic in NYC. What’s going to happen? You miss your stop? Just pay attention, bozo! Afraid of getting harassed, mugged or fondled? That shit happens to sober people all the time! So finally, after 5 minutes of unwanted guffawing, I asked her what she usually takes home when she drinks. She looked at me as if I was an idiot and reminded me that cabs exist. I immediately came back by saying that cabs are overpriced, all the cool people take trains and she needs to get with the times. I then shuffled away and cranked up the stereo to some random Rick Astley jam. My co-workers are dorks.

– This week’s Letter To Coze comes from Force Factor:

That’s not even a sentence. I don’t know what you’d call that. A headline? And why would a new way of testosterone boosting be bad news for testosterone boosters? I think it would be the opposite. I’m really confused. Please write back to me ASAP with an explanation.

– Try this trick over the weekend: Go to work.

Have a productive weekend, everyone!