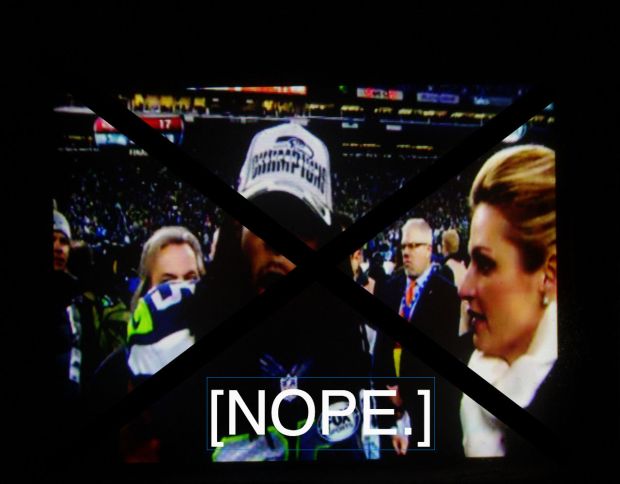 Let me start by saying how proud I am to be writing the “300th Post” on Baseball For Dinner. It’s been a long time coming. I never would have thought that a frozen yogurt review blog could change directions and the lives of everyone involved. It should also be noted that throughout the years, many posts were lost in the shuffle of moving from host to host. So this is not the 300th post on BfD. It’s actually not special at all. This post doesn’t even exist.

Wait. Yes it does. And it might be my last Roundup ever.

Let me start by saying that 2013 was one wacky ass season. It almost didn’t even feel like I was watching the NFL. Here’s a list of 20 surprises, in no particular order:

1) Tim Tebow was hardly mentioned on Sportscenter.
2) Michael Vick got benched for a superior backup.
3) The entire NFC North was in crutches.
4) Some dude killed some other dude, resulting in that dude being dead.
5) Andy Reid became the Kool-Aid Man.
6) Spicy sausages were infused with Skittles.
7) Ray Lewis couldn’t find a tailor.
8) The Falcons were godawful, giving me hope that the Braves will follow suit and completely bomb this season.
9) Ditto for the Giants/Yankees, Browns/Indians, Redskins/Nationals, Rams/Cardinals, Vikings/Twins, Steelers/Pirates and Ravens/Orioles. Wait. I like the Orioles. Pirates are cool, too. Fuck it.
10) We learned that football players have the ability to bully other peers and the direct effects of that happening. Also, nobody went to High School.
11) A punter was blacklisted for supporting gay marriage. A punter.
12) Matt Stafford stayed healthy. It still didn’t help the team.
13) The Chiefs became a juggernaut in the AFC West overnight. Last year, people were killing themselves because the team sucked so badly.
14) Nobody got benched for sipping cough syrup.
15) .
16) Scott Hansen didn’t reveal to be a cyborg.
17) Brett Favre didn’t drop any hints about his inevitable return.
18) Chip Kelly had a winning season by doing nothing but showing people pictures of Cheesesteaks.
19) The Chargers won a playoff game.
20) Jim Harbaugh learned how to spin.

As jaw-dropping as this season was, I have vowed to not watch the Super Bowl. This morning, I read an article that changed my life and my view on the game. Apparently, the Super Bowl is merely a smokescreen disguising the biggest event in the calendar year of Human Trafficking. This is all very frightening and weird. I thought The Last Boy Scout was dark, but that movie was just about gambling. Apparently, behind the scenes of gridiron glory, children are being kidnapped and forced into flesh trade. To quote:

“It is expected that between 100,000 to 300,000 American women and children as young as 12 years old are exploited in sex trade within the county, according to USA Today. While it is possible for people to be abducted during the Super Bowl, most are likely taken beforehand and used at major, large-scale events like the Super Bowl.”
If it’s not an actual figure involving the Super Bowl, then why even state the figures? This follows the same logic as, “500,000 people get murdered every year. Some of those murders happened during the Super Bowl. Super Bowl=murder”. And I get what they’re saying. The Super Bowl brings a lot of tourism. Tourist traps are hot-beds for prostitution. But let’s be frank: There’s already hookers in New York City. It’s a known fact. I don’t think anybody that comes to New York to see the Super Bowl wants anything to do with some broad, nor will they be wandering around Hell’s Kitchen. But to tell you the truth, I’ve never even seen a prostitute before. “The Red Light District” is nothing but a bunch of porno shops. And it’d be ludicrous to think that these ladies of the night are hanging out outside of Metlife Stadium. THIS ISN’T THE 1950’S, PEOPLE! Prostitution has nothing to do with the Super Bowl, unless the town the Super Bowl goes to already has a prostitution problem.

“Such incidents include the estimated 10,000 women and minors that were trafficked in the Miami area during the 2009 Super Bowl in Tampa, Fla., according to the Florida Commission Against Human Trafficking.”
So 10,000 people were transported [or dare I say trafficked] 300 miles to get from Miami to Tampa? Okay. Whatever makes business. Has nothing to do with the Super Bowl. Has a lot to do with the fact that there are too many prostitutes in Miami! I have one friend that went to Miami for the sake of going to Miami. The only story he has is about doing coke with a prostitute. That’s the only mental image I have of Miami.

The real reason why I’m boycotting the Super Bowl is because it’s in New York. But it’s not in New York. It’s in the Meadowlands, which is in the middle of nowhere. I kind of wonder how many people got Super Bowl tickets and were excited at the thought of being in New York Citay®, while booking a room at the hotel that’s closest to the stadium because, duh, logic. The person is going to be very disappointed. I also wonder how many people are going to get scared and confused when they take a train to the stadium and get into New Jersey only to be surrounded by an industrial wasteland. I wonder how many people will panic and say out loud “Is this the right train?”.

Wait, that’s no reason to boycott the Super Bowl.

The real reason is because I hate both teams. In fact, before the season even started, I predicted that this would be the Super Bowl. The Broncos and Seahawks are clearly the best teams in the league and they deserve to be in this game. Fuck, now I kind of DO want to watch the Super Bowl. I’ve been waiting to see Marshawn Lynch get doused in a Gatorade Cooler filled with Skittles. It’d be the greatest moment in all of professional sports.

I’m not watching the Super Bowl because everybody watches the Super Bowl. For this reason, I have purposefully not watched 5 of the last 10 Super Bowls. It’s like that one time you saw in indie flick that you really liked, but then months later, everyone is talking about it. Suddenly, that flick isn’t so good anymore. Much like the Kentucky Derby, everybody becomes a football fan for one day. And the Super Bowl is never the best game of the season. In my mind, “The Super Bowl” is actually the championship games. Getting to the Super Bowl is just as/maybe more important than winning it all. I hate the idea of going to a Super Bowl Party that’s chock-full of people that rolled their eyes at me watching football for the previous 20 Sundays. If you know me at all, you’re probably already sick of me going on this rant. And that’s not the real reason as to why I’m not watching it.

I’m not watching the Super Bowl because I’ve lost interest in football. In years past, I start to get an itch around July. Suddenly, all I can think about is football and I spent most of my free time watching old games and documentaries. Anything to get my fix. Now that it’s January, I’m starting to eat sleep and breathe Baseball. I’m counting down the days until Spring Training. It’s taken over my brain. It takes precedence. I’d rather listen to Hawk Harrelson call a White Sox game than hear Deion Sanders wax on and on about swag and “paying the man”. I really don’t care anymore. I’ve grown numb to the sport. I didn’t think it would ever happen, but it’s probably for the better.

With all that said, I’m not watching the Super Bowl because I have to work during the Super Bowl. It was a terrible error in scheduling. I can’t complain about it, as I’ve been able to watch the entire season until now. Instead of being bitter and forlorn about the debacle, I’ve decided to put my boycott hat on and pretend that I don’t care about missing what will surely be a ridiculously awesome game. I’ll watch the recap. I might be able to catch the 4th quarter. I don’t need to watch it because everyone else will tell me what happened in full detail.

As the season comes to a close, I bid you all adieu. May your off-season be radiant and filled with time-killing activities. Just think, we will finally have our Sundays back! We can go to the park, learn how to sew or maybe even court a significant other. The world is a good place to live, with or without the gridiron. I don’t know if I’ll ever get my love for football back. Maybe the last few years of writing these Roundups will be locked away in my memory as my brief stint as a sports blogger. Or maybe I’ll just start writing about baseball. Or maybe, just maybe, I’ll get the fever in July and be more ready for football than ever. There’s only one thing that I do know: No matter where you are or what you’re doing, if you see Michael Boley running towards you, it’d be a good idea to duck.

Enjoy the game, everyone! Broncos are going to win 27-23.