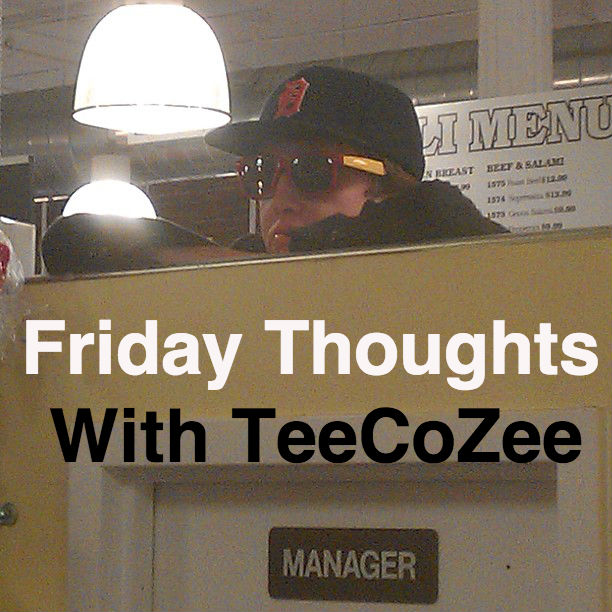 Good Moleman. It’s Friday, November 22, Two Thousand and Thirteen. The weather in Brooklyn is 51˚ with light rain and somewhere out there, a little boy thinks the Twins are going to win the World Series. Meanwhile, I have a few things on my mind:

– As a person that constantly dodges injury, it comes as an apocalyptic shock when it actually does happen. Yesterday, a wood splinter went underneath my left thumbnail. It was a terrible fiasco, as the only manager on the front end during the lunch rush. I stayed on the register for a good 15 minutes, taking transactions one-handed, while in denial that my other hand was actually injured and covered in blood. That’s basically what happens every time I get hurt: I cover it up and refuse to look at it so I can convince myself that it isn’t actually happening.

– People at the Franklin Ave stop are inherently lazy. The C train has 8 cars, but they all bunch into the front/back car. There’s only one entrance to the platform and apparently there’s a scary monster at the far end, because everybody downright refuses to walk any extra feet to get on a different train car. So every time you pass through the station, it takes an extra long time to get everyone boarded. The conductor constantly gets frustrated with this, making announcements stating to use all available doors, but nobody learns. This could probably be associated with the C train having the most overweight ridership, but that’s a study for a different Friday.

– I can never get behind the idea of “eating out” [and get your mind out of the fuckin’ gutter]. The act of going to a restaurant and spending an exorbitant amount of money to have people watch you eat is ridiculous to me. So, this weekend, I’m being coaxed into celebrating one of my cashier’s birthday. The more details I learn about this soiree makes me wish I never agreed to anything. First off, it’s in Midtown on a Saturday night. NOBODY WANTS TO BE IN MIDTOWN ON A SATURDAY NIGHT! GET YOUR HEAD OUT OF YOUR ASS! Secondly, it’s at a themed restaurant that’s called Johnny Utah’s, which excited me until I learned that it had nothing to do with Keanu Reeve’s character in Point Break. It’s just some fratty-assed cowboy bar and grille with a mechanical bull. Why this sounds appealing to my co-workers is beyond all comprehension. And then the deal breaker…

…It’s $40 per person. Not including [automatic] 20% gratuity and drinks. And this is not fancy food. This is bar food. Some of our choices include:

And it comes with fries or coleslaw! For 40 friggin dollars! When I expressed my shock and disdain, all of my cashiers treated me like I was a maniac. When I expressed this to normal people, they treated me like I was lying. There is NO NEED to spend 40 dollars on bar food for one person. I could take a date to a fancy Brooklyn hole-in-the-wall and spend less than that. I’ve decided that I’m just going to eat before I get there, buy a $7 PBR and be on my merry way. But my cashiers will not stop giving me shit. Here’s an example exchange we have:

I still stand by my beliefs. There’s no reason to spend $40 on wings.

-This week’s letter comes from onlineservice@us.ngrid.com:

Your latest National Grid bill is ready. To view your bill, go to https://online.nationalgridus.com/paperless and enter your User ID and Password.

Your bill can be viewed by selecting the “View My Bills” link. The bill can be printed for your records or saved to your computer.

We appreciate your business,
National Grid

I’ll get right on that, Rose.

– Umbrellas are bullshit. Don’t use ’em.

– It’s frighteningly easy to spend a lot of money when you’re depressed. It’s a phenomenon I rarely experience, as I’m never inclined to be in public when I’m depressed. But when it does happen, EVERYTHING IS BUYABLE! The other day, I started thinking about buying things for the house that I didn’t even think I needed. Like a plunger or air fresheners. Anything can cure your unhappiness, but you won’t know what it is until you have it, so SPEND SPEND SPEND!!!!

– Sometimes, I wake up in the morning loving how my hair looks unwashed. It actually makes me look like an attractive human. But I never have the heart to leave it unwashed, out of fear that it’ll look like a grease museum by lunchtime. Chicks can get away with unwashed hair. I’m not a chick. I’m a dude with morals and paranoias.

Have a gravy weekend.