My First Trip to the Gay Bar

I was the DD for the night as we made our way to our final destination: a gay bar in the heart of San Francisco. It was my girlfriend’s birthday, and she decided that we should go to a gay bar because, well, we’ve never been to one.  We had a group of about 15 people, and everyone was looking to dance and be merry.  Why wouldn’t we do this at a gay bar?

My outfit could have been considered a bit metro, so I began to wonder whether I’d blend in or stick out like a sore, heterosexual thumb.  Though even if a guy did hit on me, would it be because I blended in, or because I looked obviously straight?  I would never know…

It took about an hour in the bar before I was finally approached by a male.  His proposition caught me a bit off guard, however.  He said that for his friend’s birthday, they were going to have a bit of a contest on stage. He really wanted me to participate.

I was flattered, of course, but skeptical regarding the nature of this contest.  I asked him if I would have to dance or anything like that.

“Oh no! Don’t worry. You miiiight have to show a bit of your underwear though.”

Hm…I wouldn’t have to dance, there was a bit of cash to be won, and who really cares if I show a bit of underwear?  It was my girlfriend’s birthday, and this would really make her day to see me on stage all of a sudden.  My two friends with me at this moment further encouraged me, so I said OK.

“Perfect. In about a half hour I’ll make the announcement, so just come to the stage!”

I immediately doubted my decision.  What did I really sign up for?  God, I should have a drink. Nope, my girlfriend is already drunk.  Fuck.

I spent the next half hour nervously talking with our group of friends (which included mostly coworkers, mind you) about everything BUT what had just transpired. In fact, I did my absolute best to keep it a secret.  I wanted to make sure that it was a surprise to as many people as possible, especially the birthday girl.

I saw the MC get onto the stage and grab the microphone.  Oh god, has it been a half hour?

“Alright I need all you guys to get on stage.  Everyone that I talked to, get up here now!”

He made solid eye contact with me and motioned me up on stage. My friends all looked at me in confusion, and then disbelief when I set my water down, and started to walk toward him.  Their bewilderment quickly turned into cheerful excitement as I arrived at the stage.

I then found myself in the company of six handsome lads, each one gayer than the next.  I still didn’t know whether or not I blended in, but in my head, I felt extremely out of place.

I was trying to listen to what the MC was saying, but it was quite noisy. I was dying to know exactly what the contest would be. I was able to make out a few words here and there and- wait… did I just hear that correctly?  Did… Did he just say… wet underwear contest?

My heart sank and I looked back at my group of friends.  Their excitement was almost too much to bear. They think I signed up for this willingly! Bloody hell, what have I done?

At this point, I wasn’t sure how my girlfriend would feel about me prancing about in my skivvies in front of everyone, so I signaled to her that I needed a thumb’s up or a thumb’s down before proceeding. I would let her make the call.

Her thumb was decidedly up.

Mentally, however, I wasn’t at all committed to this.  I’m sober, and straight, and this is not actually happening.

While the MC was exchanging niceties with the crowd, another man approached all of the contestants on stage with an empty milk crate.

The brashness of it all was overwhelming.  Clearly this was my last chance to get out!  I don’t really have to go through with this!  I glanced at the stairs leading off of the stage, then turned back to face the milk crate.  It had 3 pairs of pants in it already.

Any more delay, though, and people might think I’m some cowardly, straight prude!  I couldn’t let that happen, so I leapt an incredible mental hurdle and found a special place that I’ve never been to before.  I removed my clothes in front of 200 people, and decided to accept my fate.

The music kicked on, and the crowd cheered.  Do I dance now?  I looked around me and each of the six guys was shaking their stuff without abashment.  This was such a terrible, terrible idea.

Beyond the stage railings in 360 degrees was the crowd, gawking and yelling. I found my group of friends doing the same.  As the only people I knew in the bar, they were simultaneously my source of comfort and my source of shame.

I’m not sure if I was dancing or not, but I remember seeing some guys just beyond the railing looking at me and waving me over.  If I walk, I don’t have to dance…

Once I got close to them, several hands reached out towards my nether regions.  I’m fairly certain I had to pull someone’s hand out of my shorts before I was able to back away.  I was adjusting my boxer-briefs to an appropriate level when I noticed something tucked into my waistband.  I was now $3 richer.

I turned around and was rudely met by a blast of cold water from a squirt gun.  Oh yeah.  WET underwear contest. How could I have forgotten?  I looked into the crowd to see one of my friends dying of laughter.  Of course I was laughing too, this was absurd.

Still trying to blend in (futile as it may have been,) I decided it would be a good idea to dance with another one of they guys up there.  Surely it would be better than dancing alone looking awkward.  What I had forgotten, however, was that these guys were still homosexual.

I put a hand on a dude’s shoulder, and immediately he grabbed both of my arms and wrapped them around him.  Holy shit.  He is absolutely loving this. What am I doing?

I did the best I could to survive the few, albeit painstakingly long, minutes on stage while earning an additional $11 in tips (partly from my female coworkers.)  The DJ cut the music not a moment too soon, and the MC returned to the stage.

It was time for judgment.

Now, I’m no regular to wet t-shirt contests, but I do know enough to understand how this was going to work.  They were going to have each contestant step up one at a time, and we’d get one last chance to impress the crowd.  Whoever gets the loudest cheers, wins.

I’m certainly not going to shake my ass in front of everyone but, hell… I’m not about to lose this competition either.  If I’m going to publicly disgrace myself, I’d better come out a motherfucking champion.

My mind begins racing as I try to plot my finishing move.

So the first guy goes up, and does the most bootylicious shake I have ever seen any white person do. Wow. How do I compete with that? 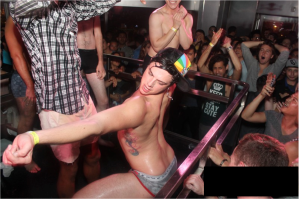 The next guy goes up- and I’m not kidding- he does the splits right there on stage.  I’m talking crotch-on-the-floor splits. The crowd loves it.  What the hell am I going to do? I’m coming up dry on ideas here, and I’m quickly running out of time.

The next guy is up, which puts me on deck, and still nothing!  He starts dancing, and puts his hands on the railing in front of him.  He bends over and shakes his moneymaker up against the MC’s crotch, much to the delight of the crowd.

I’m watching this outrageous display in front of me, and then- it hits me. Never before has anything become so instantly clear to me.  All worry just fades away because, despite my poor dance performance, I now know that I have this thing in the bag.

It’s my turn.  The MC reaches to pull me up front and center.  I counter by briskly grabbing his arm, and pushing his hand away.  I then turn his body, shove him forward, and bend him over the railing.  Right over the fucking railing. 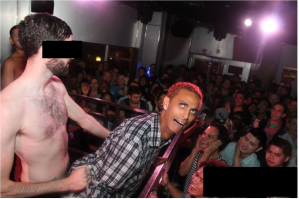 I must admit, I felt a little bad for the two remaining contestants.  They didn’t stand a chance after that.  But to ease their misery, the MC pulled each of them forward and immediately pushed them back without even letting the crowd react.  I won this, and no one could argue.  I was sober, straight, and I absolutely killed it. 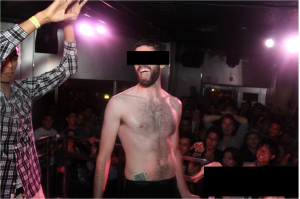 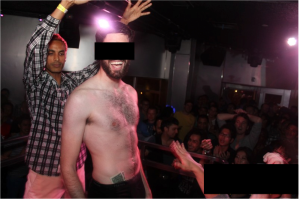 Now, where the fuck are my clothes?

One thought on “My First Trip to the Gay Bar”