There was hardly a hoot nor a holler at The Treehouse on Sunday. The TV may have glowed bright green for 12 straight hours, but not much really happened to rile anyone up. Perhaps with the regular refs back in the game, we are no longer expecting a flurry of stupid things to happen. But stupid things happen all the time, no matter who is officiating. The games simply met my eyes and I could not muster any immediate reaction. When the bumble-fest known as the Giants-Eagles game went into halftime, my brain was exhausted. The TV antenna started to sputter and the picture froze for a good 20 seconds on Tony Dungy’s face. 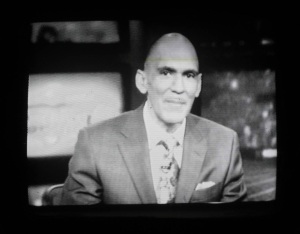 I stared deep into that face. The wrinkles and craters hypnotized me immediately. Inside, I saw infinite nothingness. Nonsense and molecular collisions. After the picture resumed moving, his visage was still burned into my skull and for a brief moment, I felt nothing. The 10 hours that had just happened were immediately erased. A blank canvas, as if I just woke up from a deep sleep. To this moment, I can barely recall any memories of that day. I blame it all on Tony Dungy sending my brain into a spasm. In effect, I’m not going to try to watch all of these games over again. It’s just not worth the time. What I will do, however, is play one of my “Get Out Of Jail Free” cards and do a “To The Point” roundup. In this condensed mess of football analysis, I will write one word for every point scored in each game. You may remember me doing this gimmick last season, but probably not, as it wasn’t very good and only took you 5 minutes to read. This time around won’t be much different.

Baltimore Ravens 23, Cleveland Browns 16
In pure Flacco fashion, Joe Flacco decided to flacco his flacco by flaccoing for 356 flaccos, flaccoing 28 of his 46 flaccos, which made Brandon Weeden’s performance look totally wacco and potheaded. Joe Flacco is truly the flaccoest. Flacco.

Atlanta Falcons 30, Carolina Panthers 28
The Panther’s defense was somehow able to sack Matt Ryan 7 times, but still couldn’t come up with the upset. This was probably because Cam Newton upset all of us, making a measly 15 completions and being unable to keep composure in the closing minutes, getting a delay of game on 4th down. They’re their own worst enemy.

St Louis Rams 19, Seattle Seahawks 13
Every time Sam Bradford appeared on RedZone™, he was doing something mega-awesome. Perhaps this is why RedZone™ only showed the Rams offense 16 times. Their new slogan: Every Completion From Every Game.

Minnesota Vikings 20, Detroit Lions 13
Hold up. Don’t get your boner in a pretzel over Christain Ponder. The bozo only threw for 111 yards. Both of the Vikings TDs were returns, which is sad for both teams.

San Diego Chargers 37, Kansas City Chiefs 20
The Chargers forced 6 turnovers in this game. That makes up for 1/5 of the turnovers they had last year. I would love to believe that the defense is getting better, but I think the truth is that they want me to think that, so they can disappoint me further down the road. They love doing that.

[The Bengals prefer to ask questions rather than answer them. Whatever.]

Houston Oilers 38, Tennessee Oilers 14
After the masterpiece he made for the world last week, I was confident that Jake Locker was a shoe-in to start on my fantasy team. The fantasy ended all too early, when he left the game before completing a single pass. Enter Matt Hasselbeck. It’s gonna be a long season for Tennessee…

Denver Broncos 37, Oakland Raiders 6
The process has been slow going, but finally CyboManning is operating at full efficiency. He even scored points in the 1st quarter, which is rare. Could CyboManning be turning a new leaf, or is it all just virtual reality? Only time will tell.

New England Patriots 52, Buffalo Bills 28
In the beginning, it seemed like the upset was imminent. The Fitzpatrick to Chandler connection was in full effect and the Buffalo D was making all of the stops. Then the second half happened, and 28 unanswered points turned into 35. For the Bills, this game was representative of their 2011 season. All the pieces were in place, but then they magically crumbled. Even with Fred Jackson and CJ Spiller in the game, they still could only muster 98 yards.

After he hit 250 yards, I had a reason to root for the Dolphins. They could have a good season, if only they could win games.

Green Bay Packers 28, New Orleans ‘Aints 27
This was one of the few games that were won by penalty. Garrett Hartley kicked the game winning [probably] field goal, only to have it pushed back by offensive holding and then a defensive penalty evened it out, but ultimately confused Hartley and made him lose his mojo. At 0-4, no Saint has any mojo.

Washington Redskins 24, Tampa Bay Buccaneers 22
I’m really glad they brought the R-32’s back on the C line. I was beginning to think the “summer swap” was going to last forever. Just it’s presence on the local tracks reminds me of jackets, burning leaves, horse racing and fall colors. Life is good.

Chicago Bears 34, Dallas Cowboys 18
Game in a nutshell: With plenty of time left & down 14, Dallas gets a much needed turnover to put them right in the redzone. And then on the next play, Tony Romo pitches the ball forward to a Chicago defender, who runs it back the whole length of the field. Guuhhhh…

Trying to replicate his brother, Lawnmower Manning vied to enter the Virtual World. In the end, he just couldn’t collect enough data before time ran out and he morphed into gelatinous balls of pixels. Kill incomplete.

I have discovered that it is much more difficult to write a specific amount of words than to ramble on and write bullshit. I’m exhausted. I’m spent. I need a vacation. In fact, yes, I am taking a vacation. Next weekend, I will not watch a single moment of football. I will be too busy living it up in Northern Michigan, celebrating the marriage of BfD vets, Roscoe and erin e. Enjoy your October and I will see you all in week 6, when I’ll probably be laughing my ass off when the Saints go 0-6 and Lawnmower Manning starts reading books & questioning religion.