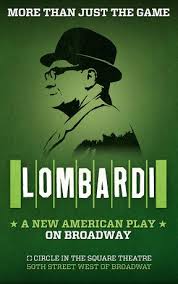 Using Football as the subject of a Broadway show is about as useful as an air conditioner in the dead of winter. This production has no theatrical twists to strike a general interest: nobody is addicted to drugs, nobody dies, nobody is warding off a terrible secret, nor is anybody conspiring in any shape or form. This is strictly about football and how it has affected the lives of a select few. Looking at this idea on paper, many would assume that this production would ultimately fail in regards to quality and sales. On the contrary, the production does mesmerize and it succeeded in getting [presumably] thousands of people into the theater that would not be caught dead in one otherwise. This production in many ways is the revenge of the husband. For once, it is the Sunday couch potato that is dragging his significant other to go out and get some culture. This is a play about one of their many leaders.

Many people only have a vague idea of who Vince Lombardi was. Many people also have no clue who in the hell he is, period. [My friend Kathy once inquired, “Was he like some mob boss or something?”] Historically, Vince Lombardi was the first real successful professional football coach in history. He led the Green Bay Packers to win the first 2 Super Bowls. In effect, the championship trophy was named after him. Microscopically, Vince Lombardi was the original football fanatic. He was a blueprint for millions of people to follo, and a model for what the ideal head coach should be like. He was a charismatic father-figure that dedicated his every thought and action to the great sport. The story within the production focuses on him, his wife Marie and [fictional?] journalist Michael McCormick as he spends a week in November 1965 following the Lombardis.

The role of Vince was played almost flawlessly by Dan Lauria. The name may not seem familiar to you, but if I was to mention that he was once known for playing as the dad in The Wonder Years, a clearer image may come to mind. He is seemingly perfect for the role, as he has always played parts that included general gruffness and bear-like intensity. The performance really showed off his abilities in tonal dynamics: one second he is bewildered and reminiscent, and the next he is kicked back to life with an infinite amount of zest and enthusiasm. He played the part of a shell for every football head coach. I believed that he was the blueprint himself. Although there is a limited availability of video footage of Vince, I feel that the part was played quite accurately.

The role of the wife, Marie, was played by the much-acclaimed Judith Light. Off the bat, I was really unsure of her. Essentially, she plays the part of the generically ignored and bored housewife. After realizing this, I was not exactly enthused about watching her for the ensuing 2 hours. In the first scene, there seemed to be an apparent discrepancy in chemistry between her and Dan. It was a series of feeding off hollow one-liners, a couple of which made my eyes slightly roll. As the story progressed, I started to grow more and more warm to her character. Luckily, the writer decided to add depth to Marie, as it would have been just as easy to have her remain static. She was a woman that was wholly supportive of her husband’s obsession and was completely willing to sacrifice her relationship for his happiness. She also found ways to cooperate with the obsession, playing as a motherly figure to all of the players that needed emotional guidance. Vince and Marie Lombardi didn’t need to have any children; they always had 40+ orphans to love and guide. She fits in just fine as a football wife living in New Jersey, but when it came time to move to Green Bay, she was ultimately heartbroken. There were no longer things surrounding her for distraction. There was no entertainment, no nightlife, no shopping, no reason to live. The scene of which this is assessed is filled with terrible heartbreak and longing, but was mildly deterred by the fact that Judith Light is a terrible crier. In fact, I would go as far to say that her crying skills almost broke the 4th wall. Here, we have this emotional scene about the inner destruction of a lonely woman and the actress merely laughs manically in attempt to play off crying. In the end, I would still say that her performance was formidable, and could have been attributed to the fact that it was a matinee performance on a Wednesday. With a time-slot like that, one would never expect the best possible performances.

Keith Nobbs plays the part of Manhattanite journalist Michael McCormick. The part of Michael serves as more of a plot device than a bona-fide character. He is the instigator that forces the audience to become acquainted with the Lombardis. After all, the arc of the story is a slice of life, taking place on only a week in the middle of the football season. There was no event of real historical importance. The story is progressed by Michael’s visit to Green Bay, and what he learns during his assignment. Keith plays the part with great stride, projecting terrific chemistry with Vince, Marie and the players. He essentially functions as the glue that holds the entire story together. Even during flashbacks, Michael will stand off on the side and observe. He functions as the eyes and ears of the audience, and for what it’s worth, I think it works. Through him, you learn the true nature and methods behind Vince’s madness.

The cast is topped off by 3 players on the Green Bay squad. There’s linebacker Dave Robinson, played by Robert Christopher Riley. He functions as the wisecracker of the bunch, and also the voice of reason. Legendary running back Paul Hornung is played by Bill Dawes. He does a very good job portraying the grossly arrogant jock. He was seemingly a trailblazer for all future punky jocks who go out and get wasted every night and feel like practice is not important. [Think Jim McMahon in the 1960’s and you’ll get the exact idea]. Chris Sullivan plays the gentle-giant fullback, Jim Taylor. Although at most times he plays off as a big, dumb hunk of meat, he becomes instrumental in fighting for players rights while the NFLPA was in it’s heydays. All in all, I feel like this was a good selection of players to portray. However, I am at the same time dumbstruck that Bart Starr, who is probably one of the only recognizable players on the ’65 team, was omitted completely. Merely mentioned in passing, as if he was some nonexistent myth.

On the technical side of things, I feel that everything was done well, considering the space it was performed in. It was done in a circle theater, which I’m sure can be a nightmare for anybody trying to block the set and actors. From where we were sitting, the blocking was done in a professional fashion so that at least 75% of the audience could still be able to discern what was going on. The set pieces came in and occasionally revolved through the floor, making almost seamless changes in scene. I found the lighting to be incredibly profound. There is one scene in which Vince is sitting in his dark living room watching game film, and the flicker of the dim light make it seem purely authentic. There are also many instances in which they pull off stadium-like lighting extremely well. Interludes would be done with Michael or Vince spouting off monologues under a single spotlight as vintage game/practice footage played on dual video screens. Given the small and odd space they were given to work with, I feel that the technical side of the production flourished.

In the end, Michael leaves town and the Packers win the game that they had been preparing for. A somewhat anti-climatic ending to an anti-climatic story. With a play of this nature, you have to take it for what it’s worth. If you are not interested in the sport of football, then you will probably find no interest in seeing this. Inversely, if you have even a mild interest in the great sport, chances are you will be engrossed by this portrait of one of the original masterminds of the game.