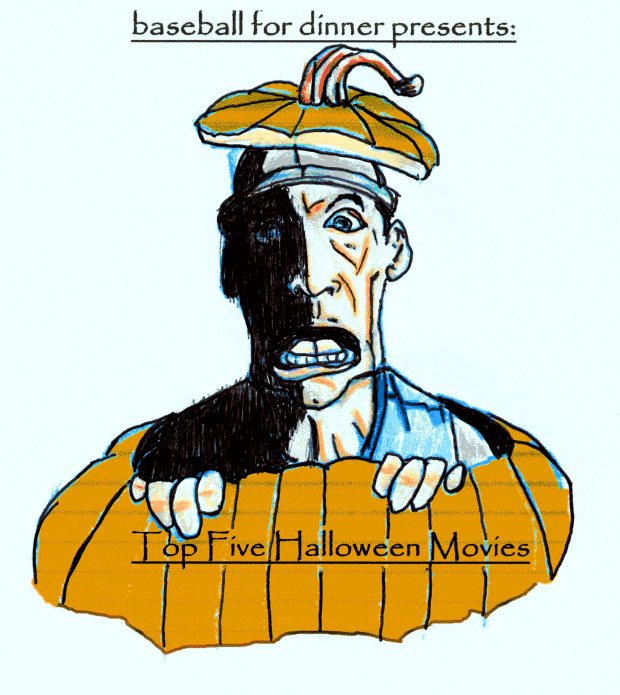 HALLOWEEN, Unlike its bigger, fatter brother Christmas, is rarely featured as a central theme in movies.

Even in movies traditionally watched during “scary month,” Halloween hardly comes up. So, when it came time to pick my Top 5 Halloween Movies, 4 tried-and-true titles came instantly to mind, leaving a big ol’ wildcard for #5.

And the winner is…. 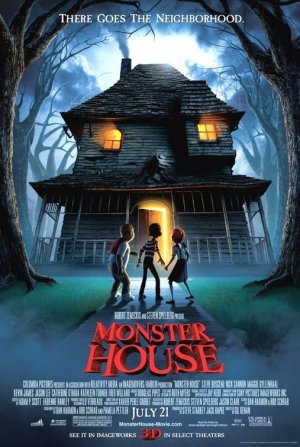 One of the first movies in the recent all-out stampede towards 3-D (Piranha 3D, Jackass 3D, Wall Street 2: Money Never Sleeps 3D), Monster House is one of those rare family movies that holds equal appeal for kids and adults by focusing on plot and character more then groin shots, cute talking animals and poop jokes.

We can all recall a creepy, rundown house from the neighborhood’s of our youth, a house that was clearly haunted as shit, complete with un-painted shutters and a yard clogged with dead weeds.

My hometown of Reed City was full of such houses, with one particularly  creepy house (which also still sports a cement polar bear on the roof ) still having the gurneys that a former abortion doctor/tenant used to use for his operations in the basement.

Monster House wisely expands upon this latent, childhood fear of haunted houses. Not only is this house haunted as shit, it will also eat you alive.

Two aspects of Monster House set it apart from the other saccharine garbage that is peddled as family fare these days:

– The main trio of characters act like real children. They’re not grown-ups in little bodies, they’re not cutesy little stereotypes, they are fully realized characters that find themselves faced with an impossible situation where no one will believe them.

– Plot wise, Monster House didn’t wow the Academy, but it does have some nice twists and turns, with the back story of the house and it’s transformation into homicidal real estate being both original and surprisingly tragic.

The finale devolves a bit into adventure/chase sequences, but it does little to derail the good credit that Monster House builds during the first three quarters of the movie. For fright-night family entertainment, you could do a lot worse then monster house.

As far as the big three of horror movie franchises go (Friday the 13th, Nightmare on Elm St, Halloween) Halloween has the biggest hit or miss ratio.

However, all of the movies are directly centered around spook night, thus qualifying them for this here top 5.

At the age of twelve, I decided it was high time I became a horror movie fan, considering that horror movies combined by two favorite things at the time (violence, boobies). I chose the Halloween franchise as my prom date to the monster mash mostly because my local video store, “We R Movies” had the whole series on VHS.

To save you, the intrepid reader, from wading through the countless lackluster sequels that feature everyone’s favorite Captain Kirk impersonator, I’ve instead written very brief capsule reviews for every entry in the series. Enjoy!

Also, besides the intro, boring as hell.

Moves the franchise into a hospital. Cue the arbitrary killing of worthless secondary characters… now! Good finale thou, with Michael and Dr. Loomis dying for the first time via explosion.

HALLOWEEN III : SEASON OF THE WITCH

No Michael Myers in this flick. Instead, toy company plots to broadcast viral telecast that will turn mask-wearing children’s faces into bugs and snakes (for real!)

In other words, this movie is a mistake!

2nd best ending in the series!

HALLOWEEN V : THE REVENGE OF THE JEDI

Undoes everything good about Halloween IV for a vague (stupid) possession angle between Jamie and Micheal.

HALLOWEEN VI : THE CURSE OF THE STUDIO VERSION

2 versions of this film exist, both of which I’ve seen.

Surprisingly character based entry into the series, with a de-emphasis on gore. Dr. Loomis is cursed to become the new keeper of Michael Myers.

A head exploding, gore-tastic mess with no characters. Ends with a closeup of Michael’s mask and Dr. Loomis screaming.

Guess which one made it to theaters?

Dr. Loomis actually died during re-shoots, causing them to dedicate this dreck in Donald Pleasence’s memory.

This was as fitting a tribute as dedicating “Fifel Goes West” to Jimmy Stewart or “Transformers: The Movie” to Orson Wells.

The best movie in the series

highlights: A young Joseph Gordon Levitt taking an ice skate to the face.

The Ending : Not only is the ending to H20 the best in HALLOWEEN history, its also a bad ass way to end the series.

If only they’d left it alone, but instead they made:

In classic Halloween style, they follow up the best movie in the series with the worst.

Instead of Dr. Loomis, we get Busta Rymes. Ug.

highlight : Jamie Lee Curtis, much to her relief, dying in the first 10 minutes. They should have just ended the movie there.

An extended intro featuring the origins of Michael Myers? Cool!

Followed by a scene-by-scene remake of the original movie? Um…. really?

HALLOWEEN II : THE BEATING OF A DEAD HORSE

A sequel/reboot to a reboot/sequel?

There you have it folks. If you really want to pop in a Halloween movie during the upcoming festivities, stick to the original Halloween, Halloween II, Halloween IV and Halloween H20.

Avoid the rest like the plague, unless you’re a twelve year old boy with a Netflix subscription.

You’ve gotta hand it to Jim Varney. This man turned a series of commercials into a bonafide successful movie franchise (well, mostly successful)

Earnest Scared Stupid is the 2nd best film in the series (with Earnest Goes to Jail being far and away the best) and features Earnest and cute dog sidekick facing off against an evil troll that they accidentally unleashed.

My childhood neighbor, David Talsma, often regaled me with stories about this movie before I saw it, setting it up to be the scariest fucking movie ever

This movie scared the fuck out of me as a kid. Kudos have to be paid to the Chiodo Brothers (who also did Killer Klowns from Outer Space) for their top-notch work on making Trantor the troll and friends scary as all hell.

However, as frightening as this movie may be for youngins, Earnest lightens up the mood considerably with his bumbling attempts to destroy the evil troll (is the troll’s weakness “milk” or “miak?”)

For me, this movie is served with a big ol’ cup of nostalgia on the side, and it’s a golden opportunity to see the late, great Jim Varney at his best, before Earnest went to Africa (and straight to video) 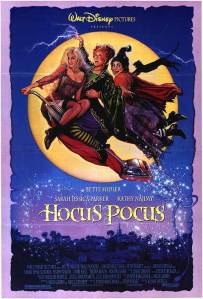 The year was 1993. My family and I were living in Botswana at the time, with the local country club’s multiplex being our only connection to pop culture back home.

Hocus Pocus was the 2nd movie we saw there (Mighty Ducks being the 1st) and my initial viewing of stood out for three reasons:

#1 – Solid cast of offbeat, supporting characters, including boy-trapped-in-cat and Billy the hapless Zombie.

( I thought those were her real teeth, until I saw more of her work)

(I thought SJP was hot, until I saw more of her work)

#3 – My 2nd grade teacher at the time necking with her “boyfriend” in the row behind us during the entire movie.

Unfortunately, I would skip the 2nd grade a week later, robbing me of the opportunity to express my gratitude to my 2nd grade teacher for enhancing my movie experience.

Hocus Pocus, in addition the aforementioned qualities, also boasts a few boisterous music numbers that add to the fun, including a show-stopping “I Put A Spell On You” and the (hot?) witch Sarah Jessica Parker’s song to  lure hapless trick-or-treaters to their doom.

Like #5 MONSTER HOUSE and #3 EARNEST SCARED STUPID, HOCUS POCUS is legit family entertainment, and would be the top Halloween movie if not for…. 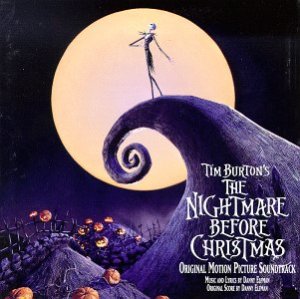 #1 – THE NIGHTMARE BEFORE CHRISTMAS

After missing this movie in the theaters while I was in Botswana, I rented it one slow summer day back in Reed City and sat dumbfounded from the first song “This is Halloween” to the final frame.

Jack Skellington, Sally, Oogie Boogie and the rest of the characters in this movie are now legendary but, during my initial obsession, they were practically unknown.

Thousands of people slaved for years over The Nightmare Before Christmas before it was finally released in 1993 and, all across America, there came a collective shrug.

After recognizing this fact, I was baffled, bewildered, and eventually bored, moving on to other, more pressing matters (Star Wars Fan Fiction)

However, like “Fantasia” before it, a funny thing happened to The Nightmare Before Christmas on its journey to obscurity.

The “Hot Topic” generation began to remember this dark, lyrical and wholly obscure movie and, by the end of the 90’s, Jack Skellington’s face began popping up on teen emo wear in strip malls across America. Soon, everyone was referring to The Nightmare Before Christmas as their “favorite movie” and a “cult classic.”

Thus did The Nightmare Before Christmas witness a re-birth of popularity for a time, before “Hot Topic” moved onto “The Happy Tree Friends” and countless other mass produced fads whose sole purpose was to give disenfranchised youths new and exciting ways to violate their school’s dress code.

Now, in the year 2010, The Nightmare Before Christmas has settled nicely into the niche of a classic, and throughout its various waxing and waning periods of popularity, it remains one of the most imaginative and painstakingly crafted children’s movies ever made, and harkens back to the Hensonian days of “The Labyrinth” and “The Dark Crystal,” where imagination and adventure, not 3D fart jokes, meant solid family entertainment.

There you have it folks…

My Top 5 Halloween Movies of all time. If you feel that the order is off, or that I left out some of your beloved childhood classics (Peanut’s fans be damned) then post your frustrations below.

And now, a word from Mr. Jack Skellinton

One thought on “Top 5 Halloween Movies”