My paintings have always been… animalistic?  Hardly the word for it.  Suffice it to say, I’ve always been drawn to animals and my art certainly reflects it.  I’ve never been any good at characterture, abstraction, landscapes, none of that.  While my real life paintings of people, places, and odd things are nice enough, even passable, I could never fully project the image I wanted onto the canvas.  Unless, of course, I am illustrating animals.  With animals, something clicks.  Rembrandt mastered people and scene.  Monet redefined color.  O’Keeffe married representation and abstraction.  I paint pet portraits. 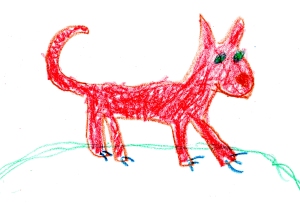 I was four years old when I produced my first animal portrait.  The paper placemat I used had plenty of designated, fun-filled coloring activities that might have appeased the average complacent child.  Not me.  I had four crayons and a perfectly good, blank canvas by turning over the placemat.  The animal simply materialized from my imagination.  A cross between an American Foxhound and a Manchester Terrier?  Difficult to say, I was only 4.

Commissioned work found me when I was 14.  My mother being so proud of her daughter, the artist, she had talked so much about me with our neighbor, Mrs. Sova.  For whatever reason, Mrs. Sova wanted a portrait of her ugly siamese cat.  My mother, bless her heart, volunteered my talent.  I was opposed to the idea, but my mother agreed to compensate me for doing her this favor.  Only $20, but still… compensation?  For painting something?

I failed ART 275, Introduction to Ceramics.  Professor Miller had major reservations about my oils technique.  And Jeremy Simons, well… he’ll never be my studio partner in metalsmithing again.  “Solder my fingers together while you’re at it, stupid twat!”  So it went for some time. 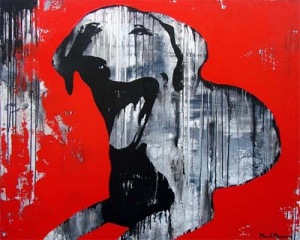 At 20, I dropped out of college, fled Minnesota and crash landed in New York City. It was here I avoided all communication with home for a year and merged with the underground world of pet portrait artists.  And I met Dale Lewits.  Dale was the leader of a growing movement in the New York art scene at the time, known as Neo-mutt expressionism.  Dale’s work in particular was inspiring and awfully impressionable on me.

Dale and I grew closer.  One sober night we became lovers.  One acid-filled day we became strangers.  And so it went for some time, until Dale suffered a horrible painting accident.  After weeks in the hospital he returned to the scene, but his works took on an unfamiliar aura.  His pet portraits grew melancholy and more distant from the visions of his clientele.  He finally lost all his prospects and his substance abuse drained him financially.  He was finally evicted and put to the street.  I sometimes find him at Riverside Park, sketching the many dogs that are leisurely walked through the area.

I continued to produce mediocre work and sell it at various squares throughout the city.  Finally, in 1992 I was approached by Ms. Laura Wakley in Washington Square Park.  The paintings I had on display struck the Upper Eastside woman as real, wholesome art with a provocative touch.  She offered me two thousand dollars and work space on her apartment roof, to paint a portrait of her two cats Lilly and Scarlet.  $2000 for painting cats?  Why the hell not?  I hadn’t eaten in three days.

It was the break I had been waiting for.  Today, I continue to paint pet portraits, many of my clientele through Ms. Wakley.  I’ve painted just about every pet one could possibly have.  Dogs, cats, rodents, birds, horses, reptiles and amphibians, even an ostrich named Anne Boleyn.  My oil paintings have been licensed and featured in greeting cards and Humane Society pamphlets.  Today, I operate from a small store and upstairs living space in the West Village on Hudson Street, where many of the oil paint originals are on display.  So keep your chins up, dear readers, and tap into whatever obscure talents you possess.  If I can make this kind of living by painting obliged critters for the rich, just about anything can be done successfully in this town!