How To Forget Where You Are

I only watched a bit of the Oscars this year, while I was on a business trip in Orlando with two co-workers. Two of us were in suits and the other guy was in street clothes, which made him look like he was our trainer, or perhaps more like we were his bodyguards. We went to TGI Friday’s, and they treated us almost as if they’d never seen someone in a suit there, especially two people who pulled up to the front door in a black Cadillac sedan with tinted windows and got out carrying briefcases. It was a twenty five minute wait, even at 8 PM on a Sunday, because Orlando, from what I can tell, is a horrible place were hotels exist solely to service other hotels and scattered between these hotels are chain restaurants called TGI Friday’s or Chili’s or Sonny’s or Hooter’s or Tony Roma’s, and even though Tony Roma’s sounds and looks like the same goddamn thing to me, everyone claims it’s “the place to go”. We weren’t really into waiting twenty five minutes to get a seat at a shitty chain restaurant where all the dishes are covered in some sort of mayonnaise or ranch-dressing-based flavored sauce, so we inquired about porch seating, where we were told that there was immediate seating, and all the while I couldn’t shake the fact that the server was acting like we must be some really poorly camouflaged secret shoppers or spies from TGI Friday’s corporate quality control. Sitting out on the porch was the place to be at TGI Friday’s in Orlando, because I could hear myself think and the din didn’t drown out the television speakers. I had originally planned to watch the Oscars, but then I had to fly to Florida for the third time in a month for work, so at that point getting to catch some of them felt entirely good enough. I only saw two of the ten films that were up for best picture, and one “Up In The Air”, starring George Clooney, was not one of them, which I think I may have enjoyed if I’d seen it because I suppose it may have reminded me quite a bit of how my life has been as of late, but I didn’t see it because I wanted to see Shutter Island more and I didn’t even have time to see that because I’ve been traveling for work so much. I could explore the connotations of this line of thought more, but I feel like I’d just be searching for irony, and that tends to be a rather obnoxious habit.

A rare luxury aboard Delta

Meanwhile, I’ve been on a plane or in an airport for the last eight hours, and I’m currently at cruising altitude probably somewhere in Montana airspace. I’m flying from Philadelphia to Seattle, and I can’t believe that we still have two hours to go. I already started reading a new novel this afternoon at the airport and finished it an hour ago. I brought another one, because I knew I’d do this, but I’m afraid starting another novel right now might just melt my brain and I’ll be compelled to suddenly thrust the book back in my briefcase and buy a five ounce bottle of Sutter Home from the flight attendant for seven dollars, drink it in one gulp, and then have to ask the heavy guy with lots of metal jewelry sitting next to me to move so I can go to the lavatory four times in the remaining two hours. I find myself thinking a lot while I’m on these trips.

Really, while it might seem like the obvious thing to do, I’ve found that I think somewhat differently when I spend a day 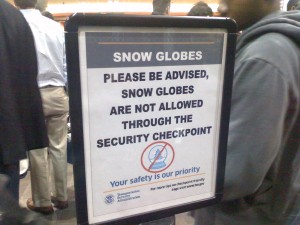 What's next, no Pet Rocks on board either?!

in transit. There’s something less stressful about it than navigating the city on foot or driving to work in a car or plodding your way through public transportation, and I think it’s because I never work on the day I travel, and I get paid anyway. It’s like every action I choose to do, every person I decide to have a short conversation with, and every novel I read cover to cover is my job, because all I’m really being asked to do for a day’s pay is get from point A to point B and there are no other rules besides. I don’t know why, but I tend to steer clear of conversations. I haven’t gotten to know a single thing about the people sitting next to me on any of the dozen or so flights I’ve been on this year, and in fact many of my neighbors I’ve spoken nary a word to. It’s not that I don’t have the energy, per se; rather, I guess I haven’t found the interest. After the first of these trips, the excitement of traveling cross country at least once a week rapidly diminished and without the extra adrenaline pumping through my veins I’m about as likely to start a conversation in flight as I am on the subway, and perhaps even less, since I can’t duck off at the next stop if things get uncomfortable.

This job and the lifestyle that comes with it feels transient, even though there is seemingly no end in sight unless I want there to be. Part of me, of course, is sick of these screaming Jamaican babies and the guy right behind me who thinks the best place to repeatedly cough is through the space between the seats directly onto the back of my neck. Only being home for a few days at a time, constantly missing and being missed, literally not unpacking my suitcase until it’s time to repack

One of the nicer perks.

it at the last minute and coming closer and closer each time to just winging it with what I’ve already got packed and seeing what happens. The other part of me wonders what the hell I want out of a job if not this. It is rarely stressful, at least excessively so, and I get paid better than any other job I’ve had. The people I work for I communicate with almost exclusively through e-mail and over the phone, and those I work with are generally great to be around. I always get to go to a new city in a different state, often one that is warmer than where I live and sometimes a city I’ve never visited before. I’m pretty sure that, in the past, when I was daydreaming in hopelessly vague terms about the work I’d someday be doing to support myself, I figured I could handle just about any type of task so long as it provided the constant reward of flying all around to different places all the time. Whatever was so alluring about that I can’t recall precisely, but the essence is still palpable. It’s that part of my personality that frustrates me the most; not the not knowing myself well enough part, but the not knowing myself even well enough to know that I don’t know myself as well as I think I do part. Why do I think I know things about myself when if I thought harder about it I might very well know that I actually have no evidence on which to base such strong opinions?

But convoluted pseudo-philosophy and dangling participles aside, I feel like it might be important to keep a more consistent record of these whirlwind trips, or at least of the observations I make while on them. As my computer battery nears the red because I haven’t actually turned it off all day (including the times when all electronic devices are meant to be shut off completely), I realize that most of the thoughts I have that seem novel or outside of the realm of “common thought” (a term I’ve just coined to define the recycled musings that dominate 95% of my daily consciousness) are not so esoteric or profound as they are half-baked and fueled by my lazy, under-stimulated critical thinking skills. I realize this when what I think I just thought was worth remembering, I can’t put it into words because the thought was not as complete as the emotional response elicited tricked me into thinking it was. I’ll keep this in mind as I sort through my introspective ponderings. Thus concludes Chapter One of my tales of travel.

← “A Behanding in Spokane” presented by Baseball For Dinner-Theatre
BfD “U-Decide!” 2010 →