After leaving Billy’s in a mini-blizzard, the BfD team knew that Roscoe’s travel plans for the next day probably wouldn’t be happening. Enter into the equation a BfD Reunion Conference Bonus Day, fun for the entire family (except maybe Granny and Uncle Cletus, but let’s not get into sorted family histories, this is supposed to be a happy occasion). What better place to ignite the fires of the extra day given to BfD by Mother Nature other than Bill’s Family Restaurant.

Cozo had planned to meet Carvs there at around 10:30. He drifted into the parking lot at 10:35, and sat at an open booth. After indulging in 3 coffee refills, he noticed that he was still alone. He called Carvs to no avail, so Roscoe was invited to make breakfast more of a BfD event. And now…waiting…and it seemed that everyone was enjoying the paper. What machines are outside? GR press? USA Today? Ah ha! USA Today! On a depressing and snowy day, nothing seems better than watered down soft news to help take the coffee down. After browsing for 15 minutes, Cozo found that there was absolutely nothing of interest in the entire paper. Roscoe and Carvs arrived shortly after Cozo gave up on the paper. By now, the breakfast specials are over with. Carvs and Roscoe still go for breakfast plates, like a pack of fools. This time, Cozo is on the up-and-up. Perhaps because he had been there much longer than the other 2. Tuna Melt it is. And Tuna Melt it was not.

To set the record straight, this is a tuna melt:

2) Any kind of white cheese or cheddar

3) Bread, toasted with the rest of the sandwhich.

Bill seems to think on the other hand that this is a tuna melt:

3) Toast: The only hot part of the sandwich.

First off, you can’t call it a tuna melt if the tuna isn’t fucking melted! And the bread is supposed to be toasted with the rest of the sandwich, which causes the melt. Basically, Bill sold Cozo a tuna salad sandwich with toasted bread. It made the gloomy day seem gloomier.

After a hearty meal (for most), BfD team members Cozo and Roscoe as well as avid BfD reader Carvs decided to reconvene at the House of El Cozo to regroup and form a task force that was a little bit more green and earth friendly for a trip to the local watering-hole, of the sonic variety, that is. After using the parking lot of the Community Bible Baptist Church as a staging area (The same parking lot recently used as a base camp for the most recent GR film endeavor of a certain Mr. Cent), the group headed to a place that could appease Coze’s desire for auditory splendor. He and Roscoe were determined to find some stellar vinyl that would prove conducive to the cleaning process (the aftermath of a successful stir fry).

After scouring the record shop, Cozo eventually decided upon some classic albums from the early 80s. What can be said? The BfD team loves their ’80s music. Not to mention that most ’80s nights don’t do the genre justice. What pairing will last just long enough to make it through cleaning a messy kitchen and living room? Prince’s 1999 and Huey Lewis and the News’ Sports, of course. Unfortunately Cozo forgot that he had been declared the steward of affiliate Joey Z’s vinyls, including a pristine copy of Sports. Fortunately, he is now the proud owner of his very own copy, much to the chagrin and jealousy of his neighbors, aunts, uncles, accomplices and enemies.

Needless to say, the cleaning and reorganization session went swimmingly, with some unchoreographed and sporadic dancing taking place. There’s nothing better than dancing on a stomach full of either tuna melt or farmer’s omelet to some early ’80s jams to clear the last remnants of a mild lingering hangover. As the floor was swept and the dishes put away, the team was ready for another round of intensive conferencing. But alas, technology failed them. Instead, they turned to a good ol’ entertainment standby for blustery winter afternoons that have kept kids entertained for ages: video games. 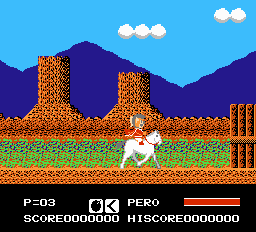 Puss trained that horse to run, and he went out and won...

The pair put on their game faces (Guz and Loo) and browsed through the extensive library of vintage 8-bit glory, and eventually were led to Puss in Boots when Ging got tired of watching the BfD squad bumblefuck their way around the console. From the opening sequence, where our feline hero rides in on a horse, you know you are in for a one-of-a-kind treat. Apparently the backstory is that Puss in Boots, also known as Pero, got a contract as a mouse-exterminator for some Fat Cat, Baron von Fluffy or something, but then can’t bring himself to kill the mouse so helps it escape instead. This, of course, pisses Baron von Fluffy off to no end, and so he traps Puss in Boots in time from which he must battle his way back to the present to confront his nemesis (Turtles in Time rip-off anyone?).

Actually watching someone play the game gives you absolutely zero clue this is what’s going on. You just think Puss in Boots is an asshole traveling around the world shooting guns, throwing bombs and boomerangs and generally making a nuisance of himself. Which is pretty entertaining to at least watch for a couple of minutes, if not actually play. My guess is you throw in a Blue Ribbon winning beverage, and you’ve got yourself a fantastic afternoon.

Eventually Roscoe and Cozo found their way to Founder’s, to imbibe in some hearty drafts and mingle their fellow adult beverage enthusiasts. Several prominent members of the Auburn Estate were in attendance, which isn’t at all surprising given their connections with the brewing industry of Michigan. The evening had all the trappings of a great night, filled with just the right balance of friendship and debauchery. That is, until BfD team member Roscoe stumbled upon a devious plot hatched by the Brewing Company itself. The name of this insidious trap: Founder’s Mug Club.

At first Roscoe thought it was merely a pyramid scheme, designed to separate the gullible from their hard-earned cash. Typical setup, sign up and give us $50 dollars for a initiation fee and we’ll give you a dollar or two off our draft prices, plus you get your very own mug to drink out of! This is the type of scheme that Ponzi had wet dreams over. What better group of the populace to fleece than people that like to get drunk.

After diligently researching some more (passively listening as Mr. Darcie talked up the ins and outs to an interested Danny Diesing on the smoker’s porch), Roscoe decided this wasn’t merely a get-rich-quick scam; it was in fact a full-blown all-out cult. Mug Club has all the necessary components. Monetary dues up front. Which leads to the members wanting to spend every waking hour within the establishment, to “get their moneys worth.” This in turn creates an exclusive society (Mug Club) existing and operating within the larger society (Founder’s) with secret rituals and rites. The best place to hide said secret rituals and rites; none other that the public forum of the tap house.

Roscoe knew if he wanted to retain his current personality, one he had worked for nearly a quarter of a century to procure, he had to find a way to get out of the lion’s den without letting the lions know he had a tasty steak in his back pocket. And if there was time, find Cozo and lure him to safety as well. When dealing with secret societies, it’s best to keep your hands relaxed at your sides, and to move slowly and fluidly, with an inner confidence. Roscoe isn’t sure if this proper procedure is helped or hindered by a couple of beers. And Founder’s beers at that. Jesus, no telling what was laced in the beer or on the glass. Roscoe rushed back to the table, beer in hand, to find Cozo engaged in conversation with several people. None of them had the telltale mugs in front of them, but maybe they hadn’t yet proved themselves worthy, or they could possibly be a spy to keep a watchful eye, a hidden sentinel walking among the unwashed masses. Roscoe knew he just needed to ride this out, and forget that he had uncovered a conspiracy. The beer helped with this.

Cozo: "Here, let me adjust your earlobe for you."

Taking a couple of breaths to center himself, Roscoe sat down with a smile planted on his face. He mentally changed the fear and paranoia into a giddy kind of exhilaration, and found he could cope; he was among friends. The night continued on, and Roscoe actually did manage to forget about what he had found out. A good time was had by all.

Roscoe: “Thank you sir! I feel as exhuburant as a Christmas goat.”

Until the next morning, when Roscoe went to check his newsfeed on a social networking site, he knew that what he had convinced himself was just a delusion or dream was in fact cold hard reality. And he knew that one of the cohorts he went to Founder’s with may never be the same. Dan Diesing’s status read:

Ahh… founders. Or as I like to call it: god’s nipple.

However, at this point, all of it was moot. For all intents and purposes, the BfD Conference was at a close. There was nothing left to do besides discuss what could have been done, what shouldn’t have been done, and what will be done to take this little website into something bigger. While we all want to change the world, we all must be mindful that there are steps that must be taken to achieve this. And for now…we wait…