Sunday started out kind of sluggishly, with the Coze having an impromptu bookkeeping session in the wee hours of the morning. It went on for 9 fucking hours. This pushed back the main attractions of Sunday’s conference to starting in the afternoon, but once things got underway, they gathered momentum and proved to be quite a juggernaut of creativity. The notion for the day was a combined art project, preferably one that used at least some of the 50 pizza boxes stacked in Cozo’s dining room. Of course Roscoe and Cozo decided it was high time that BfD had a mascot, and thus, The GuzLooTron 2010 was conceived.

From these humble beginnings, the world has since been introduced to GuzLooTron 2010, a fun-loving hug-giving robot painstakingly designed to match the color palette of Cozo’s latest kicks. Once this was decided, the team ventured out in the cold and windy haze that hung over Grand Rapids, and sought the proper paint, as well as all the fixings for a kick-ass stir fry (Sunday edition).

After procuring the necessary colors, the team then put out a call to help paint a robot. But apparently Sunday is “National Don’t Answer Cozo’s Calls Day,” and the team was starting to get disheartened. That is until Danny Diesel manned up and was convinced that painting a robot was a much better alternative to just stagnating in his apartment all afternoon. With his help, and by following these 5 easy steps, you can build one too!

-A pair of Nike Toxic Sea Robin Avengers (Size 11, with paint to match the colors) 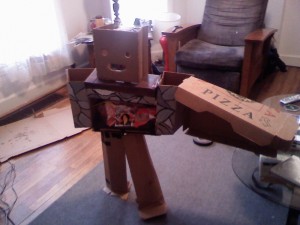 Getting it to stand up is key

Step 2: Give it some love

Step 3: Lean it against a comfortable wall, for when the legs fail out.

He does look pretty comfy next to that over-exposed window. 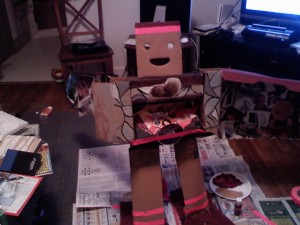 After 3 hours of pure creation, GuzLooTron was ready to be unveiled at the special edition of stir fry.

During the course of building the formidable mechano-man, Roscoe’s focus wandered a little bit. Sometimes his creativity gets the best of him, and he has no choice but to chase after it and hope that it leads him to salvation instead of destruction. In this particular instance, it seems to have all worked out for the best of everyone involved.

As most people that know Roscoe are aware, he has tendency  to get involved in strange art projects, and as Cozo will attest, sometimes these projects kind of bend BfD team member’s conventional notion of reality. This latest endeavor proved to blow Cozo’s mind once again.

After toiling away with some magazines, scissors and a glue stick, Roscoe was able to produce a visually-oriented publication in the spirit of the literary compilations from McSweeney’s, only without the need for “all that new-fangled and high-falutin’ words and such.” Take a look at the creation for yourself.

As the Rosc was still diligently working on his latest critique of pop-culture using the images of that culture itself, the crowd was starting to arrive for the special edition of Stir Fry. Even when BfD was just a twinkle in its creators’ eyes, it was traditional for several members of the team to gather at the abode of the Coze, and prepare a savory stir fry for a group ranging from five to fifteen people. TeeCoZee has been the head chef since the inception of Stir Fry Wednesdays (The Original time-slot), with Roscoe serving as the able and eager sous chef. Seeing as Wednesday wasn’t part of the conference, the team decided to something radical: have a Sunday Edition of Stir Fry, because the Reunion Conference definitely needed to include a delicious stir fry.

To be completely fair, The Coze had a partner in grime other than Roscoe back when Stir Fry Wednesdays were in it’s twilight phase. The idea originally came from Napalm, the only son from a family of cooks. He needed to express his stir fry addiction outwardly, and also find a way to make sauce so no more money is wasted on the premade bullshit. The Coze (referred to as T-Turn at the time) and Napalm did a series of trails and errors, eventually finding a sauce that worked. Few know what is actually in the sauce, and if everyone knew, nobody would eat it. All that was known was that the sauce is highly addictive, and provides a sweet substitute in the realm of Chinese foods. For it’s limited audience, Stir Fry Wednesday’s flourished in the winter of 2007. In spring 2008, the head chef left town, leaving Cozo to fend for himself as the new master of the sauce.

After TeeCoZee found shelter in a one-bedroom apartment on Fairview Ave, Stir Fry Wednesdays started surging in popularity. It came to a point where people had to be rejected of getting food, based on an unbiased ratio of income and contributions. Cozy took Roscoe under his wing as the Stir Fry apprentice, a master of the stir and the sauté. Out of this weekly food grew an irreplaceable friendship. We are both joyed to know to have served over 75 different satisfied people, including the entire BfD roster (with exceptions and apologies to PK and The Engineer).

But now, we had a Sunday crowd on our hands. This called for something different. Because of the fact that this stir fry was not only impromptu, but also on national “Don’t Answer Cozo’s Calls Day”, many people were left out. Because of the limited customer base, Cozo decided to mix things up for this occasion. He explains:

“Well, I was really getting sick of the old sauce formula, so I decided that something needed to be different. That was when the cinnamon shaker started staring me down. I added in just a little bit, and the color of the sauce started to quickly change. From first taste, I knew the sauce was too strong. It reminded me of the time I became addicted to eggnog. It was bad. A thin brown layer kept developing on the top. The tofu sauce wouldn’t thicken, and the smell gave me a headache”.

Despite all of this, the stir fry was a hit, because Cozo and Roscoe are men of versatility and strength. Although it did give Cozo a severe stomach ache, no deaths were reported afterwards, and to tell you readers the truth, the chicken wasn’t half bad. In a phone interview between Cozo and Joey Z regarding the incident, Joe had this to say:

“I don’t get it, but you see and cater to the sweet side of Chinese food. I would never in a million years think to put cinnamon in a stir fry.”

After everyone got their fill of Chinese food, it was time to get their fill of ’80s music. The location: Billy’s. The skinny: $1 Strohs. The result: blurry. Billy’s 80s night has been well known for years to be the most sloppy debaucherous time to have on a Sunday night, so naturally this was up all of our alleys. We were surprised by the presence of BfD affiliate, Lauren, as she took on the role of Roscoe’s platonic dance partner for the eve. When she wasn’t around, Roscoe would dance in the corner by himself, but with great stride. Erin would be proud and turned on. In the process of buying the first beer, Cozo was approached by a man he hardly knew, but respected. He was a handed a red glass and told to down it. Hoping it was either blood, cranberry, or laced with GHB, he guzzled it with haste. Teeth were stained all around. Things became unclear. The drink was obviously not any of those three things, but it was certainly complementing the mixture of beer, cigarettes and stir fry burps.

We first became accustomed to Billys as being the premier 80’s night in GR, as the specials beat all the others, and the DJ is above half-assed. However, on this night, the tunes simply weren’t as diggable. Our top 3 complaints:

1) The songs don’t meld together well. There is an art to creating the placement of tunes in a playlist. You can’t go from “Bust a Move” to “Goodbye Horses” (example/this wasn’t the actual case). A proper DJ needs to be able to feel what the songs are doing to the dancers, and adjust the order accordingly, so nothing will seem drastic.

2) He always ends at 1:30. This is more of a problem with Billy’s management. Their clocks run 15 minutes ahead, and then their last call is at 1:45. This means that last call is actually at 1:30. Immediately, security always pressures us to leave right at 1:45/1:30, and then at 2:00/1:45, they start getting pissed. With this happening, the bar will always be empty at the real 2:00. This is all a grand scheme so that the employees can get home earlier, and it brings our pisses to a boil.

3) JUST BECAUSE QUEEN’S “UNDER PRESSURE” HAS THE LINE “THIS IS OUR LAST DANCE”, DOESN’T MEAN THAT YOU HAVE TO END EVERY NIGHT WITH THE FUCKING SONG!

Although there were complaints from both events, it must be known that Stir Frys and 80’s nights were regular activities for most BfD members back when we were all centralized in one city. It felt good doing something that actually mattered to the organization. After the lights went up, and Cozo’s anger towards the DJ subsided, we were all sure that the 2010 BfD convention had come to a close. That was, until we walked outside and discovered the winter wonderland factory in progress. There was no way anybody was traveling on Monday. So therefore, we had an encore screening of “Everything is Terrible: The Movie”, and went to bed, wondering what could be in store for the bonus day of the BfD Reunion.