I first wrote the poem Grease Spot in 7th grade for a mail-away creative writing course I was taking.

My teacher was a retired English instructor from an obscure college in Indiana.

I didn’t know what she looked like, but I imagined that she worked at home

and wore a string of pearls.

Pearls can be both formal and casual, I thought.

The story I wrote before Grease Spot was about a jousting tournament.

Like most of the stories I wrote in 7th grade, there was:

And enough bone crushing, R-rated violence to give Quentin Tarentino a chubby.

I also found my story about jousting.

My teacher had “strongly disliked” the hardcore violence of my jousting epic.

Which, in fifteen pages, managed to kill all of its various characters in very unique ways.

Later, “A Knight’s Tale” would reach theaters and become a modest hit.

Those fuckers had stolen my idea

Had brought Queen into the picture.

At least, as far as I can recall.

My teacher loved my poem as much as she hated my jousting epic.

Called it “food for Whitman”

I disagreed at the time,

I am a better writer now then I was in 7th grade.

I used to describe everything.

There was always so fucking much to describe

I now have to depend upon my reader having an imagination

And let them fill in the infinite amount of blanks left by the written word.

I decided to re-write Grease Spot after telling the story upon which it was based on in an audition.

The plucky auditoneers had asked me to tell my best joke.

I don’t know any “best jokes”

Just long, lewd, and obnoxious ones,

So I decided to tell the story that inspired Grease Spot instead.

They loved it, even asked questions at the end.

I didn’t get the part

But I did get inspired to re-write this poem

Depending on which one of them has Parkinson’s Disease

And which one of them doesn’ t

The following is my new version of the poem:

Which was originally called:

I also drew a picture to commemorate the poem’s new edition.

The picture is called: 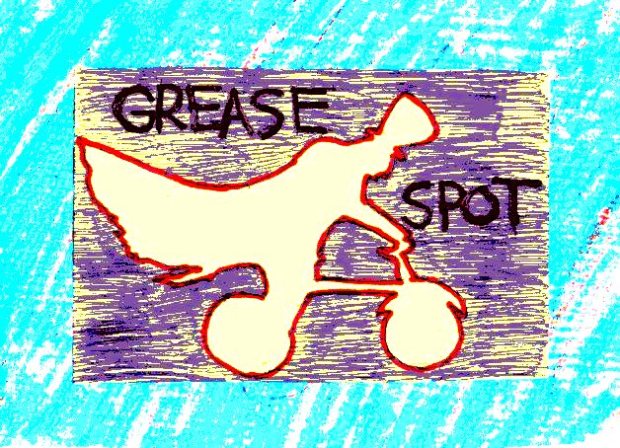 My knobby knees clink together

I rush toward my friend engraved in the road

Flies dance about him

I weave through cars

Outdated and painted with desert dust

A bike bound together with wire hits the street

Its rider a compilation of rags and plastic bags

The rider’s chewed fingertips drag across the pavement

He swoops down to snatch my friend’s body away

Holding his bounty by the tail

My schoolboy’s clothes and pale skin are argument enough

His maw opens in a smile

He dangles his prize in my face.

Blood crusts the edges of my friend

As if he had rusted

His once lively eyes puckered and grey

The rider points towards my friend’s husk

Then at his mouth,

A swollen tongue crawls from his throat

And drags across his lips.

Relinquishing my friend’s rind to the rider,

A functional death a better end

Than any ceremony could give.

As the rider pedals away

With my friend bouncing stiffly against his back

I sit by the roadside and wonder

What dish you can make out of a cat